The new bus route will run every half hour on Fridays and weekends. 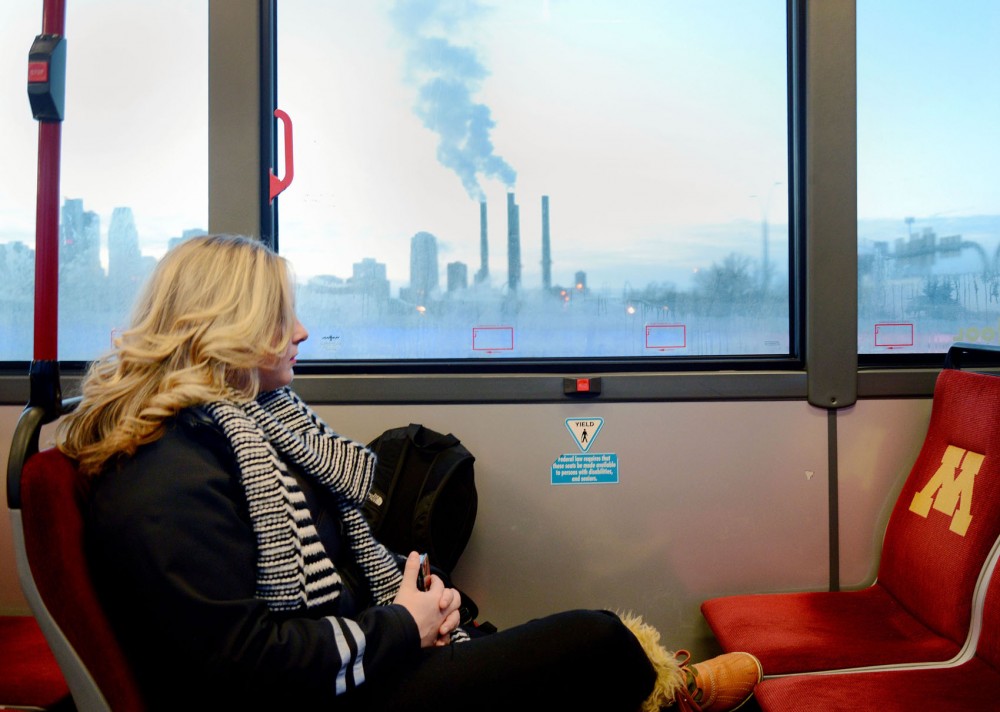 Freshman Abby Gudgeon rides the weekend circulator on Saturday. The bus now runs until 2:00 a.m. on weekends, and it circulates between east and west bank.

The new bus service premiered Friday as part of the University’s initiative to improve campus safety. Riders seemed pleased to have the alternative transportation option.

Parking and Transportation Services spokeswoman Jacqueline Brudlos said the University started planning for the new bus service in December after a series of violent crimes on and near campus.

“It was a priority of the University to address safety and security concerns,” University spokesman Matt Hodson said.

“This was meant to connect people to the libraries and to the rec center and to the Superblock,” Brudlos said. “We really think it will be a good thing.”

This bus will be separate from the Campus Connector route, which extended its hours this semester to 2 a.m. on weekends.

The Weekend Circulator route will cost the University about $125,000 for the spring semester, Hodson said, and Parking and Transportation Services will reallocate its standing budget to pay for the extra gas, staff and bus maintenance.

On the West Bank, the bus stops at Willey Hall, Washington and Cedar avenues and Mondale Hall. East Bank stops include Sanford Hall, the Jones Hall-Eddy Hall circle and the Recreation and Wellness Center.

“This is meant to be a convenience for students, hoping that they can use the buses to get where they need to go rather than driving cars,” Brudlos said.

The route loops around TCF Bank Stadium, stopping at the Thompson Center for Environmental Management, the Center for Magnetic Resonance Research and the McNamara Alumni Center. Other stops include Territorial Hall and between Frontier and Pioneer halls.

University sociology of law, criminology and deviance sophomore Jason Robey said he plans to use the new bus route routinely to get from his home on the West Bank to the rec center and to visit friends on the East Bank on weekends.

Weekend Circulator driver Bill McCusker said Friday that he’s in favor of the new route but that it will take time for the University community to adjust to the change.

“I think it’s going to work out really well once people get accustomed to it,” he said. “It takes a while for people to catch on.”

Psychology sophomore Erin Brunette, who rode on the new bus service Saturday, said the new route and stops were useful.

“I think that they are really convenient,” she said.

McCusker said he drives other campus buses during late hours and usually doesn’t have many riders past 11 p.m.

“I think a lot of people don’t even realize that we are operating this late,” he said. “I think that will change once the word gets out.”