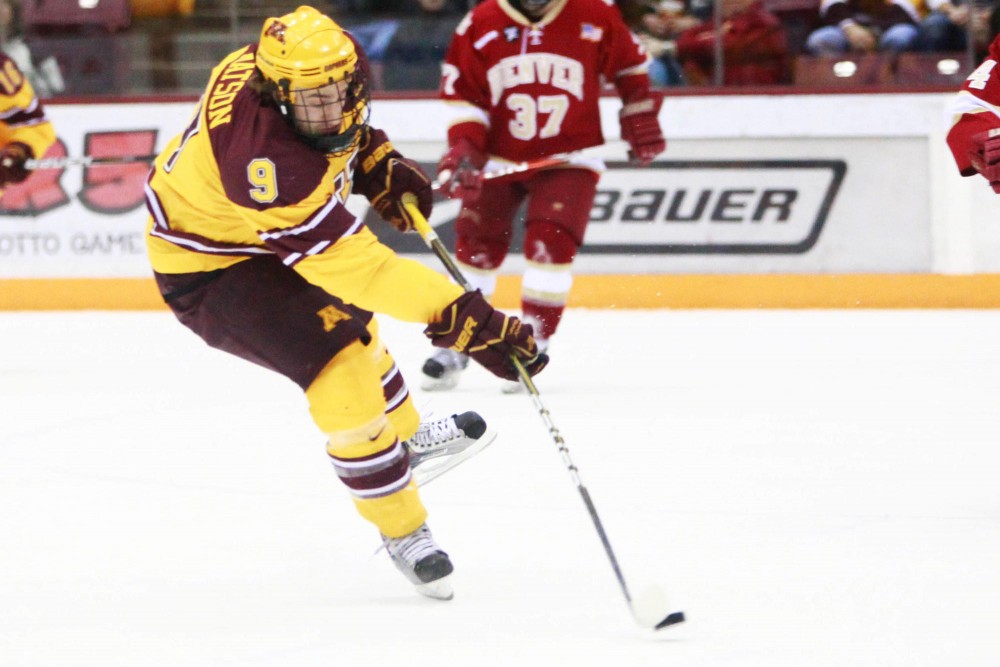 In its storied history at the University of Minnesota, the menâÄôs hockey team has never matched up with Sacred Heart University.

That will change Friday at Mariucci Arena.

Minnesota will host the Pioneers on Friday and Saturday in search of a hot start to the 2011-12 season.

The Gophers already have an unofficial win under their belt, as they defeated British Columbia 3-0 in their only exhibition game at Mariucci Arena on Sunday.

Senior captain Taylor Matson said the team is ready for the regular season to begin.

Sacred Heart finished with a 6-25-6 record last season, which included an abysmal 2-16-3 on the road. Regardless of last seasonâÄôs statistics, Matson said his team understands it canâÄôt overlook any opponent.

It was just last year the Gophers were favored in the first round of the Western Collegiate Hockey Association playoffs only to be upset at home by Alaska-Anchorage.

There is also an added pressure to this season, as Minnesota has failed to make the NCAA tournament in each of the last three years.

âÄúObviously we want to get back there, but weâÄôre not going to worry about March in October,âÄù head coach Don Lucia said. âÄúWhen you start looking that far down the line, you forget to do the things that are necessary to do today.

âÄúI think our group is motivated and theyâÄôre fun to be around. They know what the goal is and I think theyâÄôre willing to work to get there.âÄù

MinnesotaâÄôs roster is peppered with young talent. A bulk of the freshman class received significant playing time in the exhibition game against British Columbia.

Lucia said he has confidence in this young core because they âÄúunderstand what this program is all aboutâÄù and have had success before entering college.

Matson said he has seen a growth in the freshmen since he first started working with them in the summer.

âÄúI think theyâÄôre getting a lot more comfortable on the ice, more confident,âÄù Matson said. âÄúWe got to see that in the first exhibition game. A lot of them [have] got to play, and we will be seeing a lot of that this weekend.âÄù

Patterson started the game in net, but didnâÄôt face a shot in the first period.

He finished with three saves, but said despite the lack of shots he faced against British Columbia, he feels ready for Sacred Heart this weekend.

Amid the expectations of this season and prospects of WCHA play starting up next weekend against rival Minnesota-Duluth, Lucia said a main focus remains on Sacred Heart.

âÄúObviously we want to win âÄî thatâÄôs first and foremost why we play and keep score,âÄù Lucia said.