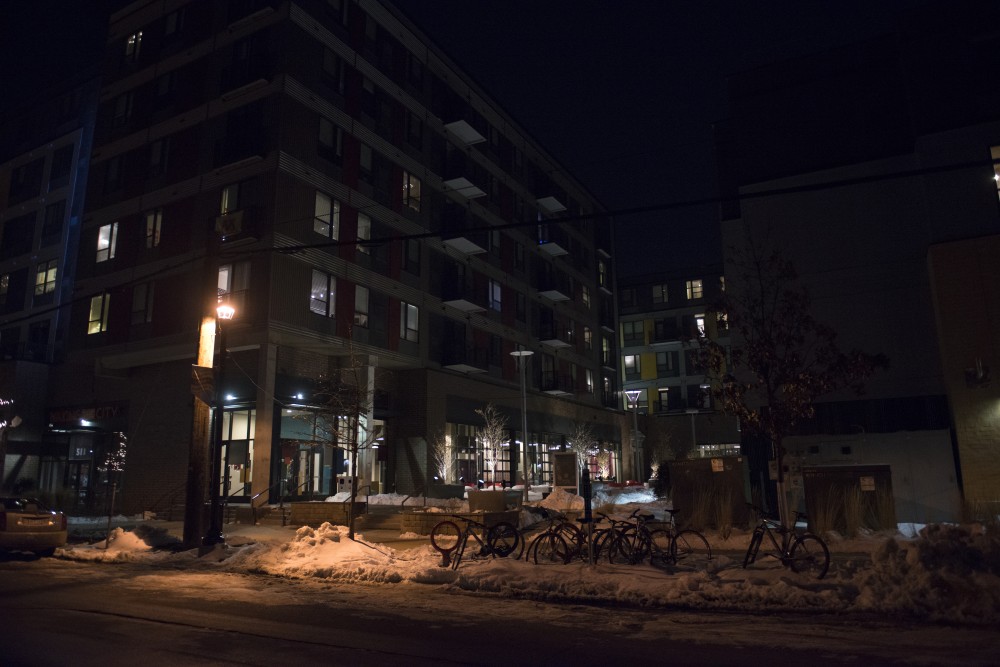 The Marshall apartment complex in Dinkytown as seen on April 4, 2018. Mitchell Hoenig, 20, was taken from The Marshall to Hennepin County Medical Center on Feb. 23 and later died on Feb. 25.

Editor’s note: The family of Mitchell Hoenig and some University of Minnesota officials objected to the publication of this story. It’s the duty of the Minnesota Daily to pursue the truth about important matters within the University community. We are committed to reporting this story with accuracy and fairness.

A 20-year-old University of Minnesota student’s death in late February was caused by drinking excessive amounts of alcohol during a night of partying that began at official sorority events and ended in a Dinkytown apartment in the early morning hours.

Mitchell Hoenig, a member of Phi Gamma Delta fraternity and a College of Biological Sciences Dean’s List honoree, was hospitalized Friday, Feb. 23 and died two days later from complications of alcohol poisoning, according to his public death certificate obtained by the Minnesota Daily last week. Cocaine use was a contributing factor.

Hoenig attended two Gamma Phi Beta events — a pre-party and a date party — the Thursday night before his cardiac arrest, and the Minnesota Daily could not confirm what he did after the two events. He was drinking at the pre-party, one Gamma Phi member said, along with other minors, according to two members and a date party attendee. Hoenig also had access to alcohol at the date party, according to photos and a Gamma Phi member, but it’s unclear if he drank there.

An ambulance called to The Marshall apartment building in Dinkytown, 515 14th Ave. SE, at 5:18 a.m. transported Hoenig to the Hennepin County Medical Center. The Minnesota Daily was unable to confirm Hoenig’s activities between the Greek events and ambulance call.

Gamma Phi leadership instructed members to direct all requests for comment or thoughts on Hoenig’s death to the sorority’s international headquarters.

“The members of Gamma Phi Beta continue to mourn the loss of their friend Mitchell,” Maureen Walker, managing director of marketing and communications for Gamma Phi Beta international, said in an emailed statement. “Our prayers remain with his family as they navigate this sad time.”

“Gamma Phi Beta representatives spent time with our chapter to support them through their grief and to evaluate that Gamma Phi Beta policies were followed on the night of their event. The event followed our policies; however, we take every opportunity to provide further education and resources to our chapters to ensure optimal event management.”

“Our son Mitchell enjoyed life [to] its fullest. Unfortunately, excess alcohol resulted in his death. While this does not in any way define our son, our hope is that this incident reminds everyone to look out for one another,” Hoenig’s parents, Aaron Hoenig and Ann Hoenig, wrote in a February Facebook post sent to the Minnesota Daily by a University spokesperson.

Hoenig’s parents opposed the publication of this story in conversations with the Minnesota Daily.

“Mitchell was a valued member of our community and we join his family in continuing to mourn his loss. It is disappointing that the Minnesota Daily is choosing to publish a story against the wishes of the Hoenig family, who we continue to support and work with as they grieve,” Maggie Towle, the University interim vice provost for student affairs and dean of students, said in an emailed statement through a University spokesperson.

“Per our standard practice, the University assisted with an inquiry from Gamma Phi Beta International Headquarters. It is common for the Headquarters to take the lead in assessing a situation while the University reserves the right for additional attention if needed. In this case, we have received no information to warrant further exploration at this time,” the statement says.

When asked for further details about the inquiry, University spokesperson Steve Henneberry said in an email that the school “assisted with clarifying institutional policies and procedures regarding student group conduct and options for responding to allegations of misconduct [if] they occurred.”

Additionally, when asked if the University would pursue any policy violations, Henneberry referred the Minnesota Daily to Towle’s statement.

“No person under the legal age of drinking shall consume alcohol at a Gamma Phi Beta event,” according to the bylaws.

Hoenig then attended a Gamma Phi date party at Sawyers on 5th in the Lumber Exchange Event Center in downtown Minneapolis from about 9 to 11 p.m., according to sources and photos taken at the event.

Photos appear to show Hoenig inside the venue without black Xs on his hands, despite being marked underage on the guest list. It is unknown whether Hoenig drank alcohol at the Lumber Exchange. It is unclear when and where he used cocaine.

According to the University Student Conduct Code — which applies to all University students and student groups — the illegal or unauthorized possession of alcohol and drugs is a punishable offense.

A Gamma Phi chapter bylaws document adopted in 2012 and available on the chapter’s University student group information page states that “all members of Gamma Phi Beta Sorority Inc. will abide by all University of Minnesota policies and procedures as well as local, state, and federal laws and regulations.”

The University’s Office for Community Standards is responsible for investigating potential Student Conduct Code violations and only launches a disciplinary process in response to a report of a potential violation by a University student or student group. As of Wednesday, no reports involving Gamma Phi had been filed with the office.

The day after Hoenig’s death, signs were posted around the Gamma Phi house reminding members to refer anyone asking for “any questions, thoughts, comments on the passing of our Greek community member” to a member of the sorority’s professional staff at its international headquarters. An email from the sorority’s chapter president, sent the day after Hoenig’s death, instructed members to refer media requests to the same staff person.

More than 100 of Hoenig’s friends, family and classmates attended his memorial at Coffman Union on Feb. 28.

After earning a National Merit Scholar designation as a high school student in Texas, Hoenig went on to make the Dean’s List in the College of Biological Sciences, which requires a GPA of at least 3.66. Hoenig’s MCAT score was in the 99.7th percentile, and he was planning on applying to Harvard University and Columbia University’s medical schools.

He also worked as a teaching assistant in CBS.

Hoenig was described as outgoing, charismatic and funny at the memorial. He quickly made friends inside and outside of his fraternity after moving nearly 1,000 miles from Texas to Minnesota.

“He was an awesome friend, as evidenced by the number of friends showing up here tonight,” Dan Olson, Hoenig’s uncle, said at the memorial. “It’s a real tribute to his friendship knowing that Mitchell lived in Minnesota for less than two and a half years and can fill a room this size, while hundreds more are watching online.”