The amendment would only affect new skyway additions, although advocates would like the ordinance to extend to replacements as well 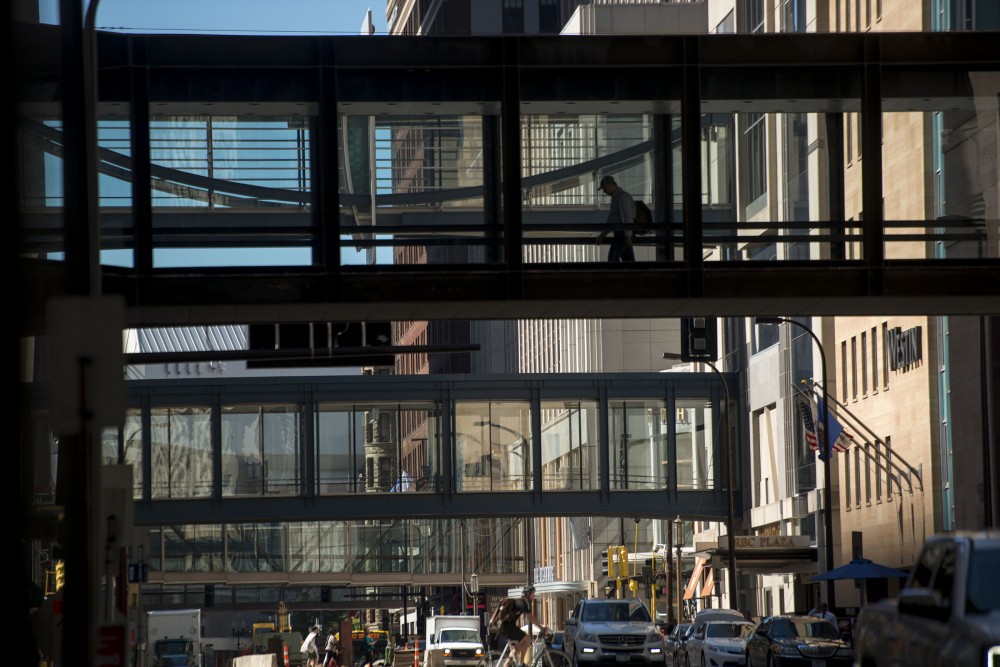 A person walks through a skyway along South 5th Avenue on Wednesday Aug. 31, 2016 in downtown Minneapolis. The city of Minneapolis is considering using bird safe glass on skyways as the Vikings stadium raised concerns to activists.

Minneapolis City Council members are chirping in with efforts to make downtown skyways safer for birds.

The proposed ordinance amendment — introduced by City Council Members Cam Gordon and Linea Palmisano — would require that all new downtown skyways use bird-safe window designs to reduce the amount of bird-skyway collisions.

Elise Morton, a former postdoctoral associate at the University of Minnesota, said patterned panes of glass called fritted windows are necessary to reduce collisions, since birds can’t detect normal glass due to its reflectivity.

“All of the things that make buildings dangerous for birds come together in the skyways,” she said.

Ann Laughlin, a board member at Audubon Chapter of Minneapolis and consultant on the ordinance, said fritted glass is typically safer for birds since it makes windows more visible.

“It’s all about visual cues, so giving the birds enough of a clue that there’s a solid there,” said Joanna Eckles, bird friendly communities manager for Audubon Minnesota.

With the proposed amendment, Eckles said the main focus would be on reducing the number of collisions even though there is no perfect solution.

While the proposal would only apply to new downtown skyways, Eckles said she’d like to address existing skyways whenever the need for glass repair or replacement arises.

“Any skyway that is made with bird-safe glass instead of transparent, reflective glass is saving … birds,” she said.

As for the price, Morton said the fritted glass typically costs up to 20 percent more than normal glass, but the extra cost could be offset by the glass’s climate control feature.

And, Morton said if more people used fritted glass, she’s optimistic the price would go down.

“I’m really hopeful that the ordinance passes even if it’s just new skyways,” she said. “That’s better than none.”

Eckles, who’s worked with city staff on the ordinance, said there has also been issues with collisions on the University’s St. Paul campus.

She said clear-glass railings in the plaza near Ruttan Hall were becoming precarious for birds, causing Audubon Minnesota to cover the panels with a specialty tape.

Additionally, a survey conducted by the Audubon Chapter of Minneapolis and the Minnesota Citizens for the Protection of Migratory Birds found the University’s West Bank skyways to be problematic, observing more than 100 bird collisions while monitoring over a four-year period.

If approved by the Zoning and Planning Committee on Sep. 15, the proposal will go to the City Council for a final vote on Sep. 23.

If passed by the City Council, Gordon said the ordinance would go into effect by the end of the year.

Regarding future projects, Eckles said Audubon Minnesota will be working with the University of Minnesota and Oklahoma State University on an upcoming U.S. Bank Stadium study.

The study will monitor bird-window collisions over the next two years at the stadium, with the results being released in 2019.

“This is a real problem,” Eckles said. “Collisions with windows overall is … one of the leading human-related causes of bird mortality, second to things like habitat destruction.”