With a Turkish flair, café opens in Stadium Village 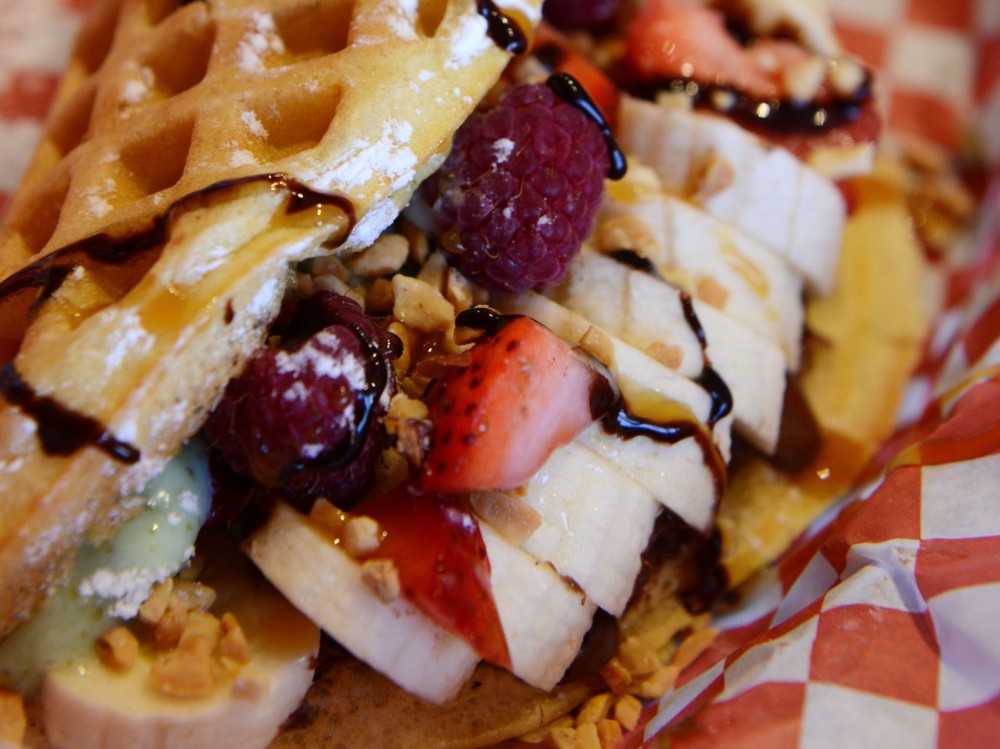 Turkish waffles, the Kitty Corner Cafe's specialty, are a popular food in Istanbul.

Start with a waffle. Add a layer of chocolate. Top with fresh fruit, sprinkle on some nuts and go.

Turkish waffles are a popular “grab-and-go” food in the OrtakÃ¶y neighborhood of Istanbul, and now Zuhal Sari has brought them to Stadium Village.

On Monday, Sari, who was born and raised in Istanbul, opened the Kitty Corner CafÃ©, which also serves coffee and paninis.

The cafÃ©’s feline-inspired name comes from Sari’s love of cats. She has two, FÄ±stÄ±k and FÄ±ndÄ±k, or Pistachio and Hazelnut in English.

She plans to donate some of the cafÃ©’s profits to Feline Rescue and Animal Ark, two local no-kill animal shelters, and she hopes to one day run her own.

“I committed myself to be nice to animals and do as much as I can for them,” said Sari, who also owns two parakeets.

To share her love for animals, Sari will hang a bulletin board in the cafÃ© for customers to post photos of their pets.

“It’s good to add local flair,” he said. “It’ll give people a reason to come down here.”

Sari began planning the Kitty Corner CafÃ© in September and said the past six months have been hectic.

“I feel like I’m sleeping at the shop; there’s so much work,” said the 29-year-old, who studies business administration at Metropolitan State University.

After Sari moved to the U.S. from Turkey a decade ago, she trained and worked as a hairstylist before studying and working as a medical laboratory technician, she said.

Beyond cats, Sari also incorporates a strong family aspect into the cafÃ©. Her brother and sister work at the cafÃ© with her and brought different perspectives in the planning process.

“We did most of the brainstorming together because of our age difference,” Gokhan Sari said.

The 21-year-old said he’ll work at the cafÃ© when he’s not taking his civil engineering classes at Century College.

The cafÃ© was set to open Monday morning, but due to Internet issues that affected credit card payment, the opening was delayed until 5 p.m., Sari said.

The manager of neighboring Punch Pizza said he’s looking forward to seeing what the Kitty Corner CafÃ© has to offer.

“The more business down here, the better,” Adam Niemiec said.

Sari, who’s a vegetarian, said the cafÃ© will serve sandwiches and salads, including vegan- and vegetarian-friendly options.

Sari said she chose the Stadium Village location because of its proximity to the light rail and the University community.

“I live upstairs, so I love that we’re getting a little cafÃ©,” said marketing sophomore Marisa Tirimacco, who lives in Stadium Village Flats and works at the Dino’s Gyros next to the cafÃ©.

“There are a lot of great restaurants in Stadium Village, but it’ll be great to have a quick option,” Tirimacco said.