Dessa now has a plaque on Scholars Walk. That doesn’t mean learning time is over. 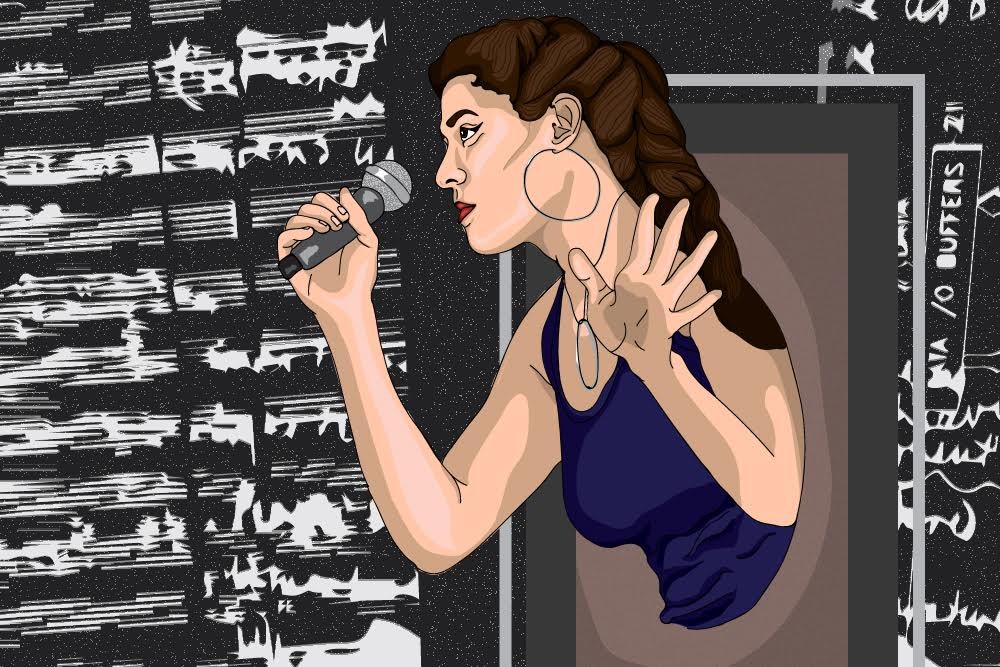 Local rapper Dessa is double-jointed and a triple threat. At least that’s how she labels herself in the first bar of her new song, “5 out of 6.”

And yes, Dessa has the talent — and the flexible joints — to make this true.

In January, the University of Minnesota quietly removed a plaque of Garrison Keillor from Scholars Walk and added one of Dessa, along with others. The plaque features a photo of Dessa, her graduation year and a quote about failure.

“I’m not sanctimonious about failure — it hurts, it’s embarrassing. But it’s also the only reliable tool we have to demarcate the parameters of our capacities, to test our strengths and learn what we can really do. A target you hit every time is a target set too close,” reads the plaque.

So … Dessa’s also a scholar — an unpretentious one at that. And a number of other things she may be too humble to announce.

“She’s rad as hell,” said University mechanical engineering freshman Jack Dockendorf, who has listened to Dessa since he was about eight. “She’s a poet who raps.” It’s hard to tell when these attributes really developed in Dessa.

What is certain, however, is that she is still evolving. As are her talents.

And even though she’s now a publicized scholar and artist fifteen-years post-grad, Dessa still allows herself to be a student.

University philosophy professor and department-chair Valerie Tiberius remembers having Dessa in class. She stood out for being an outspoken, confident woman in a program full of men (philosophy is the least gender-diverse major in the College of Liberal Arts). She also stood out simply because she was an outstanding student.

“There was one time in particular … she came to my office,” Tiberius said. “She was quite convinced that she had an argument that would refute a philosopher we were reading. I was a young professor and thought, ‘Wow, she’s so full of confidence.’ But at the same time I thought, ‘Confidence is good, but really smart students should also learn that they don’t know everything.’”

Years later, during a commencement speech for the College of Liberal Arts, Dessa mentioned that time in the office — how Tiberius had turned the question back to her, ultimately teaching a lesson on intellectual humility.

“That speaks to the kind of student that [Dessa] is,” Tiberius said. “She learns things from people that they’re not explicitly trying to teach her.”

Dessa grew up in ’80s and ’90s Minneapolis as part of a family that relished curiosity.

“She’s had the personality that she has right now from the beginning,” said Dessa’s mother, Sylvia Burgos Toftness. “She always looked you straight in the face and was so very willing to be taught. And to try things! She was always willing to try, and to be a student.”

As a child, Dessa would devour books. Bergos Toftness remembers reading to her daughter at night, glossing over coarser paragraphs in adult science fiction novels.

“I knew from early on that she had a strong literary bent,” Wander said. “She was articulate as a child … interested in language and very good at it — remarkably good.”

Dessa did things besides read, too. She worked with Burgos Toftness in efforts to preserve heirloom seeds. They would listen to Cher and practice harmonies in the car.

At one point, 11-year-old Dessa and her friend set up a cappuccino and biscotti stand by Minnehaha Park (lemonade was too simple). They were driven out by actual vendors, but not before bringing in a couple bucks.

Dessa was part of Minnesota’s first all-Montessori class (Wander said she was “made to order” for the system). She attended Southwest High School (taking public transportation to her job at Orange Julius) before moving to the University where she finished her undergraduate degree in three years.

Some time after Dessa graduated, Tiberius was attending a show at Cedar Cultural Center. Dessa was the opener.

“I didn’t go there to see her or realize that she was a singer,” Tiberius said. “The main act came on and I remember thinking, ‘Oh, Dessa was so much better.’ [ … ] Her lyrics are very — in a way — intellectual. There’s a literary beauty to them.”

Dockendorf agrees: “If you asked anyone to guess what her major was they’d say philosophy.”

A member of Minneapolis rap collective Doomtree, Dessa released her first solo album in 2010. Her fourth, “Chime,” comes out Friday.

Physics and astrophysics senior Taylor Chadwick has seen Dessa perform multiple times, the most memorable of which was during a welcome week event when the artist held her hand.

“I almost cried,” Chadwick said. “She does a mix between jazz, hip-hop and like … almost alternative. I like her old stuff and her new stuff, and whenever she speaks at concerts she’s so eloquent.”

Tom Haley was a graduate student TA at the University when Dessa was enrolled. He worked with her in a creative writing class.

“Her personal essays resonated,” Haley said. “But now she’s doing her own form and format. It’s very essayistic. She’s someone that studies and learns and turns what she gathers [into art] — forging her own path.”

And though it’s easy to map out Dessa’s journey to success, she’s never made it seem a big bowl of cherries. Remember that plaque quote?

“Dessa feels failure,” Bergos Toftness said. “She will cry and be chagrined. She will let it hurt her so she can then deal with it.”

“Good Grief,” a single off “Chime,” alludes to this emotional relationship with failure.

“They say there’s good grief, but how can you tell it from the bad?” Dessa sings. “Maybe it’s only in the fact good grief’s the one that’s in your past.”

Dessa’s scholarship is about always exhibiting a willingness to learn. From failure and from success, grief and elation. This is something people — regardless of their relationship with Dessa — see in her.

“Across all disciplines, the very best people are kind of like Dessa,” Wander said. “They still consider themselves students — not masters — of their art.”

Correction: A previous version misstated the gender-diversity of the philosophy major at UMN. It is the least gender-diverse major in the College of Liberal Arts.