The Gophers had a group of 10 athletes swim or dive at the NCAA meet. 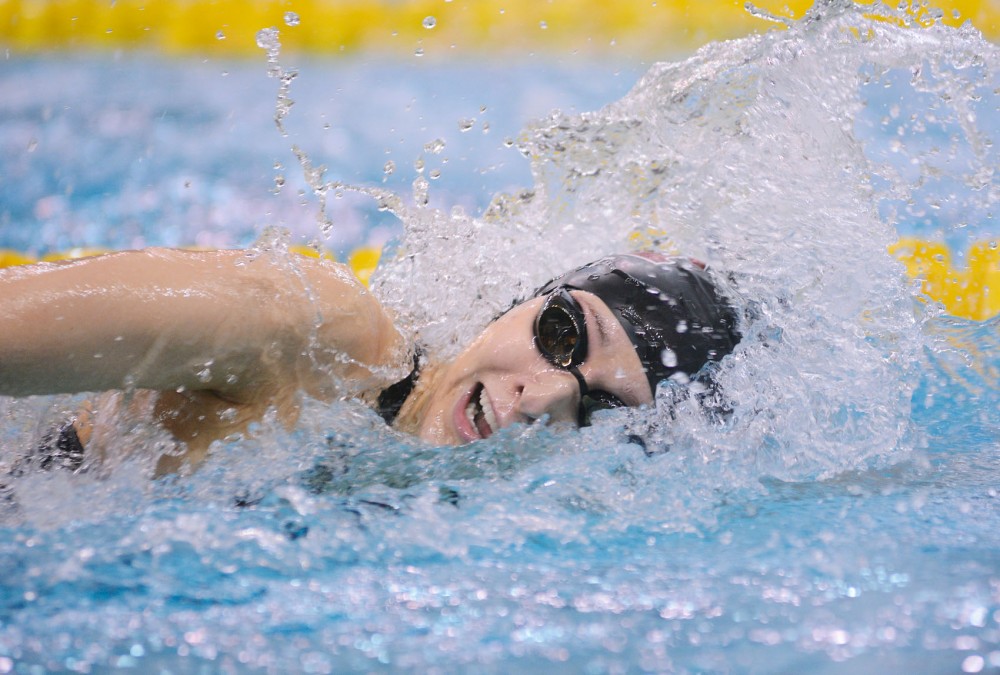 Minnesota junior Jessica Plant swims during the 800 yard freestyle relay during the NCAA Women's Division 1 Championships at the Aquatic Center on Friday.

The Gophers women’s swimming and diving team set a goal this weekend: place in the top eight at the 2014 NCAA Women’s Swimming and Diving Championships — a feat Minnesota has never accomplished.

“I’m really proud of the team’s efforts and really proud to be a top-10 team at NCAAs,” head coach Kelly Kremer said. “That’s a heck of an accomplishment, but we’re not satisfied.”

A group of 10 athletes represented the Gophers at the NCAAs, which featured more than 300 swimmers and divers.

Minnesota started out strong Thursday, placing in the top 15 in every event.

Kremer said Friday was a bit tougher for Minnesota, but the team gained some momentum with a sixth-place finish in the 800-yard freestyle relay.

“That momentum carried right into [Saturday] morning,” Kremer said. “And people like Kiera [Janzen] just wouldn’t let that momentum fade. They came in ready to roll, and it showed.”

Georgia claimed the top spot for the second year in a row with 528 total points. Stanford placed second with 402.5 points, and California rounded out the top three with 386 points.

California, led by four-time Olympic gold medalist Missy Franklin, represented one of the many talented programs the Gophers faced at the NCAA meet.

Franklin, a freshman, finished her first NCAA meet with a victory in the 200-yard freestyle.

“I learned so much more, and I became a lot tougher than I thought I could be,” she said. “It’s been an incredible experience.”

Gophers sophomore Kierra Smith said she thought her team did well against the teams from other conferences.

Smith, who won both breaststroke events at the Big Ten meet, finished sixth in the 200-yard breaststroke.

“I had high goals coming into the meet,” she said. “It didn’t come together the way I exactly planned, but I’m proud of the work I did.”

Though she placed high in those other two events, her best performance of the weekend came with a seventh-place finish in the 1,650-yard freestyle. She beat her personal-best time by about nine seconds.

“I was happy with that race,” she said.

Kremer said the entire junior class has steadily improved throughout the season and because of that, he feels comfortable shooting for the same goal next season.

“I’m sure these guys are already thinking about next year,” he said. “I am, too. I can’t wait to get it started.”

Minnesota senior Maggie Keefer and sophomore Jessica Ramberg both competed for the Gophers this weekend in the diving well.

Ramberg didn’t qualify for the A or B finals after preliminaries.

“That experience benefits you the second year,” Kremer said. “I’m really happy Jess was here to experience NCAAs. She’ll come back with a vengeance, I’m sure.”

For Keefer, this represented her final dives for the Gophers.

“We’re sure going to miss her,” Kremer said. “She’s one of the most decorated divers in our program’s history — male or female.”