Rep. Phyllis Kahn has represented the University area in the state House since 1972. 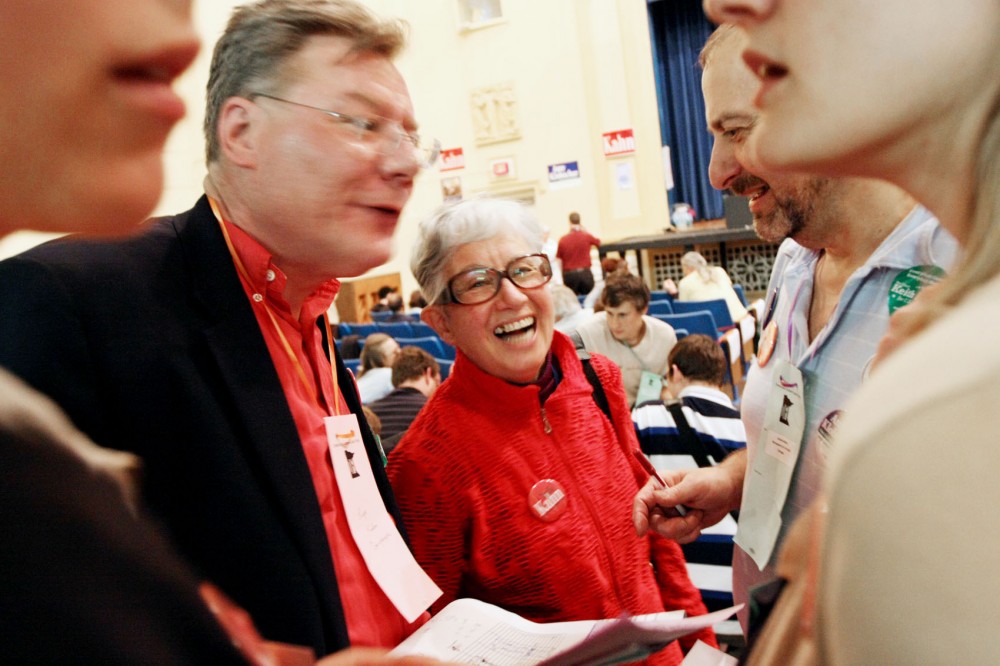 Rep. Phyllis Kahn, DFL-Minneapolis, breathes a sigh of relief on Saturday at the DFL Convention held at Edison High School in Minneapolis, following the second ballot where she was only three votes short of an endorsement.

For the 20th time in her 40-year career as a state representative, Rep. Phyllis Kahn won the Democratic-Farmer-Labor endorsement as the House candidate for the University of Minnesota area.

After six hours and three rounds of voting at the party’s Senate District 60 convention Saturday, Kahn surpassed the 60 percent mark for votes to solidify the endorsement.

Kahn was challenged by 26-year-old Mike Griffin, who rallied support from University students in an attempt to grab the seat that Kahn has held since 1972.

Griffin vigorously campaigned for more than a year and brought busloads of students and residents to the convention to vote and speak on his behalf.

Sophia Nesser, who works for U.S. Sen. Amy Klobuchar, D-Minn., said Griffin had more of a “student’s mindset,” which was a big factor in his outreach and her decision to support him.

While students at the convention overwhelmingly supported Griffin — he estimated the campaign brought more than 60 students on buses — Kahn had a small contingency of student supporters as well.

Andrew Lee, a graduate student at the Humphrey School of Public Affairs who worked at the Legislature briefly, supported Kahn on Saturday.

“I saw how effective she can be on working on conference committees and kind of doing these very unsexy but pretty meaningful things; that it’s not really about cheering or rah-rah-rah, but [a willingness] to stand up to these very technical issues.”

All those who had pledged to be delegates at the precinct caucuses in February attended the district convention Saturday. Convention attendees didn’t have to decide which candidate they supported until Saturday, which left the door open for Kahn and Griffin to do some last-minute campaigning.

In the first round of voting at the convention, Kahn garnered 56.8 percent of the vote, and Griffin grabbed 42.4 percent. Over two more rounds, votes shifted over to Kahn’s side, and some of Griffin’s supporters left the convention. Kahn eventually surpassed the 60 percent mark, and the DFL announced its endorsement of her for the November election.

Before the results came out, both candidates said they would abide by the party’s endorsement and step down from the race if the other won.

After Kahn’s victory was official, Griffin took the stage with his organizers amid a roaring applause from the crowd. Both candidates were enthusiastic about the impact of Griffin’s campaign.

After the endorsement, Kahn received an outpouring of support, and her speech focused on her former opponent.

“I think [Griffin’s supporters] are a terrific addition to the political process, and with their help, we will take back the Legislature; we will defeat these amendments,” Kahn said in a voice all too powerful for her small stature.

“What I’m really interested in doing is looking at how we utilize all of this energy, and we really keep it going,” Kahn said. “If all these people stay involved, it will be absolutely spectacular.”

Now that the endorsement is secured, Kahn said she can focus more on the session at hand.

As a former research associate at the University, she has been a proponent of technological and environmental legislation since becoming a representative. Kahn has authored major pieces of legislation, like the Clean Indoor Air Act and over the years has developed relationships with community members. This experience is one of her strongest qualifications, supporters say.

Some of Griffin’s supporters said they will now work toward helping Kahn and DFL candidates in surrounding districts in November.

“If we can keep these people involved and engaged, not only for this precinct,” Kahn said, “it may be a big factor in taking over the House.”

Griffin said afterward he didn’t know what the future held for him.

“I’m going to go, and I’m going to talk to my organizers about what they want to do next,” he said.

In his speech after the endorsement, Griffin said, “I promise you over the next eight months that I will work to defeat this [same-sex marriage] amendment that’s going to be on the ballot.”

After the convention settled down, Griffin said student involvement was the larger impact of his campaign.

“The endorsement process is long,” Griffin said. “It’s a system that is not as inclusive to young people and students as possible.”

On Sunday, Griffin said he’d learned many things over the course of his year-long campaign.

“One thing I’ve learned is that when people say students don’t vote, that’s not necessarily the case,” he said. “I think students will be engaged and active and mobilized if people are out there organizing them.”

Griffin thanked his supporters in his concession speech.