Minnesota improved to 13-1 in the Big Ten. 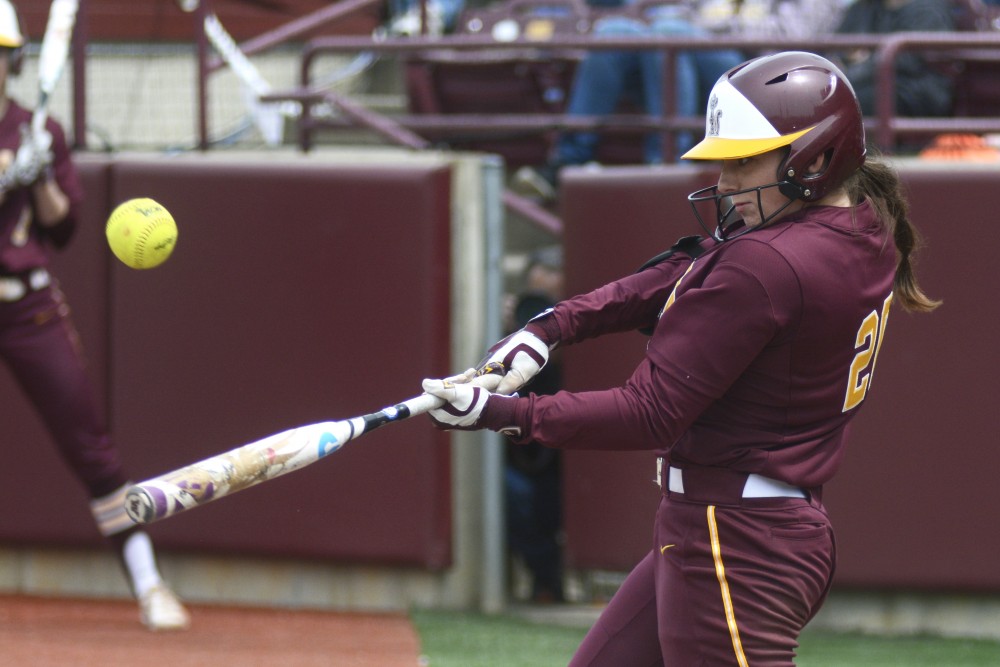 The Gophers kept pace in the crowded Big Ten standings with a sweep of Nebraska over the weekend.

Minnesota currently sits third in the conference, trailing second-place Michigan by half a game and Northwestern by one game. The Gophers will take on the Wildcats in the final series of the regular season May 3-5.

“Nebraska is a team that’s probably better than their record,” said head coach Jamie Trachsel. “I thought our pitchers did a really good job. Overall, I think we played better than Nebraska over seven innings each game and that’s why we won.”

The Gophers began their series in Lincoln, Nebraska with a close 3-0 win. The game was taken over by junior pitcher Amber Fiser.

Fiser pitched the complete game shutout, escaping a bases-loaded jam in the sixth inning and runners on first and third in the seventh to close it out. She finished with 13 strikeouts and gave up six hits and four walks.

The offense finished with nine hits and seven walks but struggled to bring them home. They had at least one batter on base in each inning, but ended up scoring just three runs. Maddie Houlihan drew a walk with the bases loaded in the second inning to score the first run of the game.

Hope Brandner followed through in a bases-loaded situation in the sixth, driving in a run with a single, and Natalie DenHartog added the final run later that inning with a sacrifice fly.

Senior pitcher Sydney Smith carried a no-hitter into the sixth inning, and the bats came alive in the second game of the series as the Gophers grabbed the win 8-3.

Smith’s no-hitter was broken up by the leadoff batter in the sixth inning who singled. Smith battled her way out of a bases-loaded jam later that inning to halt Nebraska’s momentum. She finished with the complete game, allowing three runs on six hits and four walks while striking out three. The performance improved her record to 10-4 on the season.

The Gophers broke open the game in the fourth because of a DenHartog home run, an RBI single by MaKenna Partain and a bases-clearing triple by Houlihan. Ali Lindner added a two-run home run in the seventh.

Minnesota gets the series sweep on Sunday, 9-3

A five-run outburst in the fifth and sixth innings broke open a 2-2 tie in the final game of the series, giving the Gophers a 9-3 win.

Fiser pitched a complete game, giving up two earned runs on six hits and one walk while striking out 10. She also passed several milestones over the weekend. The win on Sunday gave Fiser her 20th win of the season. And on Friday, Fiser passed the 200 strikeout mark, finishing the weekend with 222.

The offense featured a lineup change that included Houlihan in the cleanup spot. The senior responded to the shift by reaching base in all five of her at-bats, with three hits and two walks. She also added three RBIs and two runs. Houlihan lead the team in RBIs for the weekend with five and also drew four walks.

“I kind of found myself expanding the zone,” Houlihan said. “My goal for the weekend was just to make sure I was swinging at pitches — at ones I could hit. I was easily as happy with the [walks] as I was with the hits.”

The bulk of the runs came in the sixth inning that was capped off by a Taylor Chell two-RBI single.

The Gophers will head to Madison for a doubleheader on Wednesday. It is a makeup from the previously scheduled matchup that was rained out on April 17.