Crashing down to Earth

The World’s Toughest Rodeo brings the best in no-fringes, no-holds-barred entertainment to the Xcel Energy Center tonight and tomorrow. 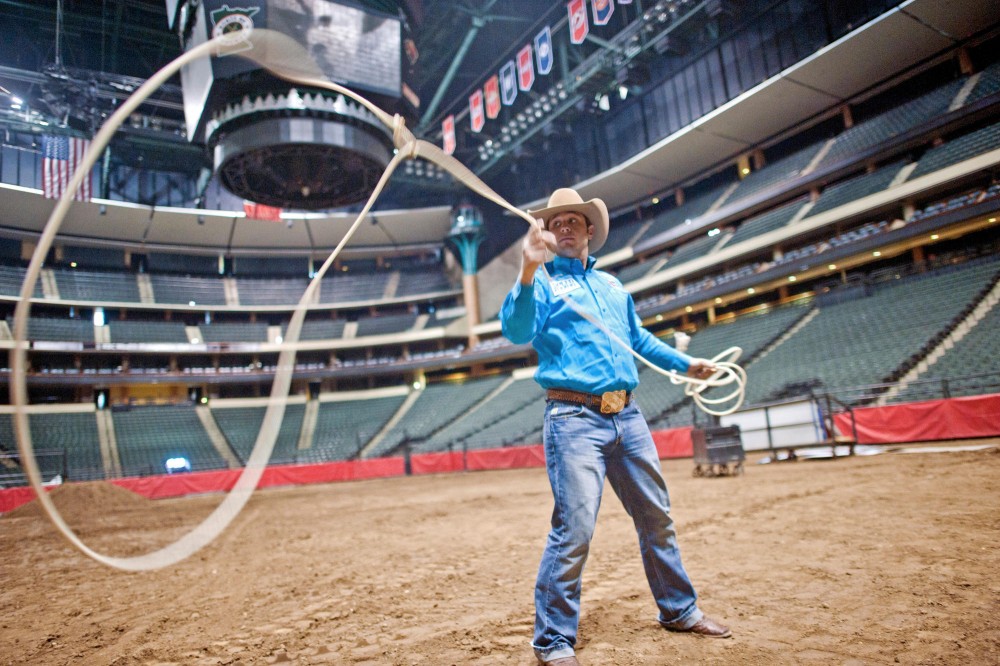 Anthony Lucia will be featured in The World’s Toughest Rodeo on Friday and Saturday at the Xcel Energy Center in St. Paul.

Anthony LuciaâÄôs round face comes alive in peaks and valleys as he whirls a blurred rope up and down around his body. This âÄúTexas TornadoâÄù is one of his classic rope tricks, and even the old rodeo hands stop to watch as Lucia twists the lariat in spirals faster than any eye could see.

âÄúDonâÄôt look so scared, Jora, youâÄôre making me skittish,âÄù he jokes with an Xcel P.R. representative as he lines her up to lasso. A quick flick of his wrist and the lariat drapes gently over her shoulders âÄî tightening precisely around her waist.

âÄúYou ready to try?âÄù he turns his eyes towards me.

The WorldâÄôs Toughest Rodeo, on display tonight and tomorrow at the Xcel Energy Center in downtown St. Paul, is a showcase of hard work and dedication that many Minnesotans are unfamiliar with âÄî the cold is one thing, but saddling up on a wild bronco and bull in the same night is quite another. Unlike most other rodeos, the WorldâÄôs Toughest asks cowboys to compete in multiple events, known colloquially as the âÄúCowboy Ironman.âÄù

Mr. Lucia grew up in a small town outside of Dallas, Texas to a father who thrived in the rodeo entertainment business. Tommy Lucia’s main pull was the animals he brought into his act, especially Whiplash the Cowboy Monkey (look him up. ItâÄôs every inch as good as it sounds). Anthony, however, didnâÄôt get involved in his dadâÄôs performance until he found an abandoned rope in the mud after a rodeo. He cleaned off the orphaned lariat and began practicing in his spare timeâÄîby age 13 he was opening for local rodeos, and by 23 he was a sponsored professional.

Just two years ago Lucia made it into the semifinals of âÄúAmericaâÄôs Got Talent.âÄù When pressed by the producers to push his act forward he decided to try lighting his ropes on fire, and was an immediate smash (they used his flaming whip in the showâÄôs opening credits long after he was cut). Without a rags-to-riches backstory to buoy him, however, the producers decided to cut him out of the âÄúreality show,âÄù and politely informed him that the judges would be voting him out.

âÄúIt was very shady, very backroom. I wasnâÄôt begging on the street by day and roping by night, so they decided they didnâÄôt want me around. I cried a little when they told me I had to go.âÄù

Despite the loss, however, Anthony kept on roping, driven to bigger and more flamboyant shows by the mindset that the âÄúTalentâÄù producers had instilled in him. At one show, however, his flaming lariat came in a little too hot and lit his back on fire. A friend was there to put him out, but not before filling AnthonyâÄôs face and mouth with fire extinguisher foam.

After this foul-tasting incident Lucia realized that he didnâÄôt need gimmicks to sell his act, that his talent and connection to the crowd were enough. He cut the fire out of his act, but audiences havenâÄôt seemed fazedâÄîhis charisma and skill more than make up the difference.

âÄúI feel like I have a connection to the audience, like I can bring them a great night. ItâÄôs all about making them forget whatever happened that day, all of their little trials, and bringing them full-hearted into the moment.âÄù

The whole rodeo seems to run on this premise âÄî if the men and women riding put their hearts and souls into their work, then the audience will ride along with them. Out there on the dirt floor, with a rope in my hand and a smiling cowboy waiting to be lassoed fifteen feet away, I could see where that feeling might come from.