The roast of future president

On Tuesday, students gathered in attempt to laugh away their discontent with the presidential election. 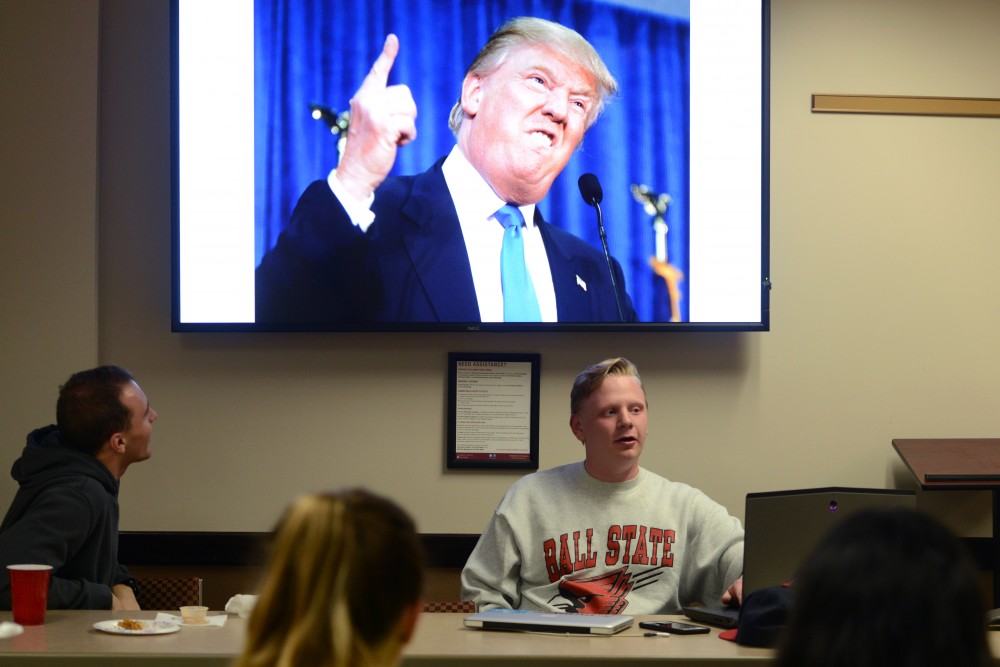 In Coffman Union, a room filled with the disgruntled youth of America was determined to seize what little solace they could in this year’s presidential election through humor.

Last Tuesday, 25 students gathered to enjoy chicken tenders and comedy at the “The Roast of Trump, Clinton, Aleppo, and this Awful Election.”

Young Americans for Liberty, a group not affiliated with any political party but determined to get more students involved in government, hosted the event — the club’s slogan is “Freedom and free food.”

Chaz Fenske — a University of Minnesota senior studying management information systems and a general officer of the club — emceed the event.

“We’re going to be making fun of some candidates in this hell hole of an election,” Fenske said to kick off the meeting.

And so they did. The audience was boisterous and eager to work off their election aggression.

Overall, attendees were well-educated about the political climate, offering obnoxious (but not incorrect) counterpoint dialogue to the roast.

“The roast of Donald Trump, Hillary Clinton, and this whole election aka a dumpster fire,” was Fenske’s first joke of the night.

Donald Trump appeared to be the easiest to roast — the group settled on just looking at several of his tweets for humor.

The best Trump joke of the night killed the audience — both their sense of humor and their beaten souls.

“For the next four years, white people are going to have to say, ‘whoa, I’m not a racist. I just voted for one,’” one of the attendees said.

The roast then moved on to Hillary Clinton as subject, targeting what the group saw as a questionable value system.

“Essentially, if Bernie Sanders said it, and you water it down, then you have what Hillary Clinton kind of believes,” Fenske said.

“Let’s be honest, he never progressed past the maturity of a 17-year-old … like most libertarians,” Fenske said.

“I’m still unsure about who I’ll vote for,” even though the election is just days away,” group newcomer and electrical engineering grad student, Kyle Roberts said.

Even Fenske was unsure about the election.

“I’m not sure at this moment if I’ll even make it to the polls, but if I do I’ll vote for Gary Johnson, more for the effect of the Third Party than anything else,” he said.

Disenchantment with the United States’ democracy rang through the night; Fenske framed the broken ideals, poetically.

“We laugh because it hurts to cry,” he said.