The Obama administration was a target at the rally. 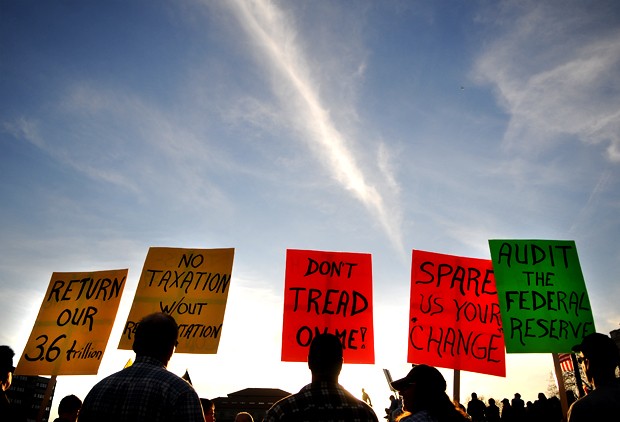 Todd and Lauralee Peterson brought the youngest few of their eight children to the Capitol grounds Wednesday, calling the so-called âÄútea partyâÄù rally there a teaching opportunity. Amid about 8,000 people, the Petersons, who home-school their children in part to teach them about the Constitution and the importance of small government, joined in. The tea parties were held in an effort to protest government spending and broad-reaching government during President Barack Obama âÄôs time in office. âÄúIt just shows [the kids] how two-fold the right side and wrong side is,âÄù Todd Peterson said. âÄúWhere government is headed is the wrong side, and it has been for a while.âÄù Over 500 tea parties were held all over the U.S., Wednesday, according to FreedomWorks , the organization sponsoring the events. Cities included New York; San Diego, Calif.; Madison, Wis.; and Washington, D.C., where many Republican political figures, such as former House Speaker Newt Gingrich , spoke to show their support and further a possible 2012 presidential bid. Rowdy protestors also threw what appeared to be a box of tea bags at the White House, prompting a brief lockdown. Sue Jeffers , who last election unsuccessfully challenged Republican incumbent Gov. Tim Pawlenty for the partyâÄôs nomination, emceed the St. Paul event. âÄúOur message is simple,âÄù she said to the boisterous crowd. âÄúRepeal the pork, cut the taxes, control the spending and get government out of our lives.âÄù The original tea party after which the events were modeled occurred on December 16, 1773. The protest was instigated by the Tea Act, which gave the East India Company power to sell tea at lower prices, thus undercutting colonial tea sellers. Conversely the current protests are about high taxes and government spending. The original protests were over ParliamentâÄôs continued power over the colonies. This comes as Obama announced his plans for tax reform. His plan includes a tax cut to 95 percent of Americans and a plan for small business who are losing money to offset their losses during this downturn against the income they’ve earned over the last five years. The plan also includes a $2,500 tax credit for all four years of college, a tax credit of up to $8,000 for first-time home buyers, and a promise to simplify tax code. Jeffers and other speakers mentioned Obama with tongues in cheek, including pastor Barb Davis White, who unsuccessfully r an for a congressional seat against Rep. Keith Ellison, D-Minn. Davis White issued a special thanks to the president. âÄúWithout him we might not have come together at all,âÄù she said, and was greeted with cheers. Speakers, which included conservative radio personality Chris Baker, drew flippant comparisons to perhaps the most notorious Capitol protests in recent memory âÄî the ones during SeptemberâÄôs contentious Republican National Convention. The crowd laughed when Baker characterized the typical large-scale rally as a left-wing event. He said throughout his radio career, people have asked him why conservatives donâÄôt get together. âÄúAnd I said, âÄòWell, theyâÄôre working,âÄôâÄù he said. âÄúBut we sincerely need to get together more often.âÄù And that was the overall message of the rally, whose organizers and featured speakers called on rally-goers to stay involved âÄî through grassroots organizing and possibly running for office themselves âÄî and continue to spread conservative ideals of lower taxes and small government. Some signs and T-shirts at the event characterized conservatives as the âÄúsilent majority.âÄù âÄúWeâÄôve sat silent for too long,âÄù Baker said. âÄúThis is not a one-time event, this is a beginning.âÄù