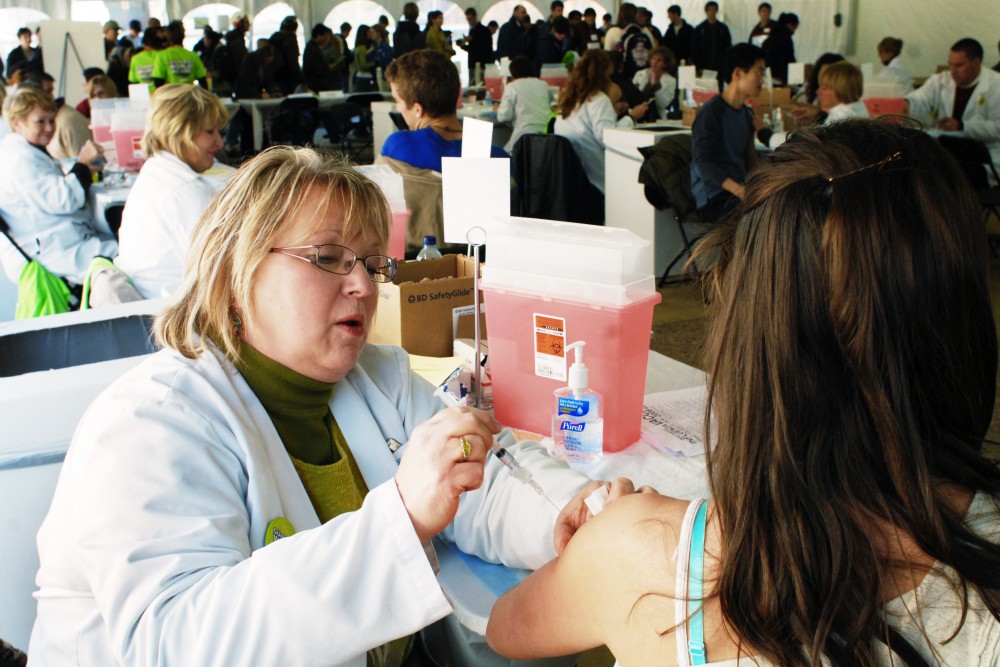 Everyone who received a flu shot yesterday can tell their friends that theyâÄôre in the record books. ThatâÄôs because the University of Minnesota was able to grab 11,538 people for flu shots Tuesday, beating the previous Guinness Book of World Records mark of 3,721 set in 2006. The mark also topped the 7,401 shots that RochesterâÄôs Mayo Clinic staff claimed they gave last week to employees. Dave Golden, an event organizer, said he only expected between 6,000 and 10,000 people to get a shot. âÄúIt went great; that is a really big number,âÄù he said.

Students and faculty went to one of four locations across campus to get shots. Sara Wilkinson , a second-year law student, said she gets a flu shot every year. Tuesday was a perfect day to get a shot, she said, because the process was much quicker than getting an appointment at the doctorâÄôs office. Wilkinson also said the opportunity to get a flu spray instead of the shot was beneficial. She said she sometimes faints when dealing with needles. âÄúFor people that donâÄôt like needles, itâÄôs a good choice,âÄù she said. âÄúI donâÄôt know if it works or not, but at least I tried.âÄù The Minnesota Vikings also came out to help break the record. Defensive end Otis Grigsby and safety Eric Frampton were at Northrop Mall on Tuesday morning. Frampton said he was excited to contribute to the event. âÄúI love giving back,âÄù he said. âÄúI love doing things for people, especially for a cause like this.âÄù Players came out in conjunction with the Vikings Tackling Influenza Program , a partnership between the Vikings and the UniversityâÄôs pediatrics department . Mark Robien of the UniversityâÄôs childrenâÄôs hospital is a part of the program and said he thinks flu shots are important. âÄúThe whole thing weâÄôre about is trying to get the whole idea of protecting your entire house, or team,âÄù he said, âÄúor your entire home team.âÄù David Schwartz thinks thereâÄôs another side to a flu shot, however. Schwartz was in front of Northrop Mall, handing out fliers citing the Centers for Disease Control and Prevention and Time Magazine , among others, to people that warned them about some of the dangers of flu shots. âÄúI just wanted to let people know to be aware about the other side of the story,âÄù he said. Although SchwartzâÄôs flier referenced âÄúnatural immunity,âÄù Schwartz said he wasnâÄôt trying to change anyoneâÄôs mind. âÄúWeâÄôre not preventing anyone from getting it, we just want to get people to look into it before they get it done,âÄù he said. âÄúNo protest, just an education.âÄù Edward Ehlinger, a director at Boynton Health Service , said he came up with the idea to break the world record this summer when he was thinking of ways to get more flu shots to people. He also said this event was a good way to administer more flu shots to college students. College students, he said, travel often and can give the virus to other people. Ehlinger said he sent materials about the event to other Big Ten health officials to tell them about it. âÄúIâÄôve already sent the challenge to other Big Ten health directors,âÄù he said. âÄúWeâÄôll see next year.âÄù However, 11,538 may not be the number that gets sent to Guinness, Golden said. Event organizers will recount the forms that get filled out, Golden said, and then come up with a final number. Golden also said the University needs to send in photo and video documentation, so the world record wonâÄôt officially be broken until everything is processed.