The Board of Regents approved the increase Wednesday as part of President Kaler’s budget. 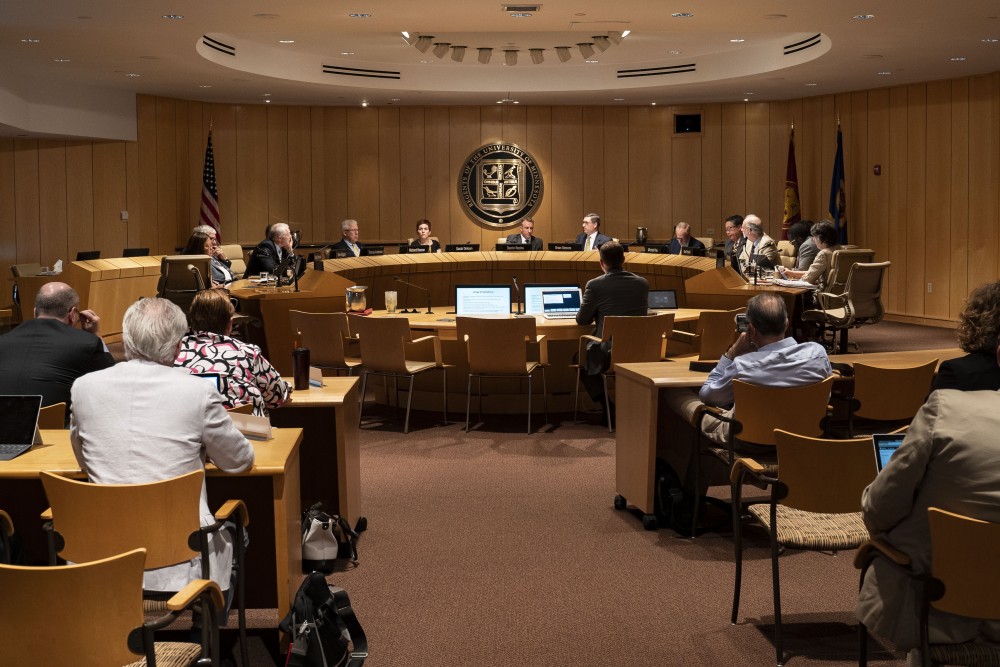 The University's Board of Regents meets on Friday, June 14, 2019 at McNamara Alumni Center in Minneapolis. The meeting covered topics including policy revisions, Board of Regents operations, and University tuition. Four new regents were also sworn in at the meeting.

The University of Minnesota Board of Regents approved a 3 percent tuition increase for most graduate and professional student programs Wednesday.

The increase was part of President Eric Kaler’s 2019-20 annual operating budget, which also included a 2 percent increase for Twin Cities resident undergraduate students and a 1.5 percent  increase to undergraduates on system campuses. In December, the regents also approved an increase of 10 percent for nonresident, nonreciprocity tuition for incoming undergraduates.

Increases in tuition are partly due to the University receiving half of its funding ask from the state Legislature.

Some professional programs will remain at the 2018-19 tuition rates, and some will increase less than the standard 3 percent. According to regent docket materials, these programs cite several reasons for this, including “positioning rates within their competitive market set, holding down overall cost of attendance for their students, and availability of grants or employer payments for instruction.”

However, some programs are increasing rates higher than the standard 3 percent to be comparable with other programs, the docket reads.

Graduate students often receive financial assistance through a teaching or research assistant position. However, for professional students, a larger percentage of tuition is paid by the student, said Scott Lanyon, the University’s dean of graduate studies.

“Obviously, lower tuition would make the overall cost of attending the University more affordable, but at the same time, many graduate students are teaching or research assistants, which comes with a tuition waiver and a stipend,” said Tommy Keller, incoming president of the Council of Graduate Students in an email. “While higher tuition will affect certain graduate students …  professional students overall are probably affected more.”

Blanca Martinez Gavina, a professional student who will serve as a student representative to the board of regents next year, said she’s worried about the tuition increase.

The increase will have an “immeasurable” impact on professional students, she said. Martinez Gavina, a first-generation college student who comes from a low-income background, said she understands tuition can be a large financial burden. The University should provide students with more grants and scholarships for those who can’t afford the high costs, she added.

Josh Clancy, PSG’s incoming president, said tuition is one of the organization’s top concerns. PSG had the option to increase Student Services Fees this year, but elected not to due to fears of rising tuition.

“Tuition is something that is consistently brought up and is a concern,” he said.

PSG tries to do what it can to support students financially, but it cannot control tuition hikes.

“Our hands are tied,” Clancy said.

Harrison Frisk, the outgoing vice president of COGS, said the effects of the tuition increase will be consequential for professional students.

While graduate students can have a majority of their tuition paid for, professional students often have to take on large amounts of debt to get their degree, he said.

Additionally, professional and graduate students are often older, which means they, for the most part, pay their own rent and in some cases have children to support, which can make paying for tuition harder, Clancy said.

“Any tuition increase is going to present a large barrier,” Frisk said.