Benjamin St-Juste’s unconventional path to Minnesota is paying off

The Montreal native is providing secondary depth in his first season with the Gophers. 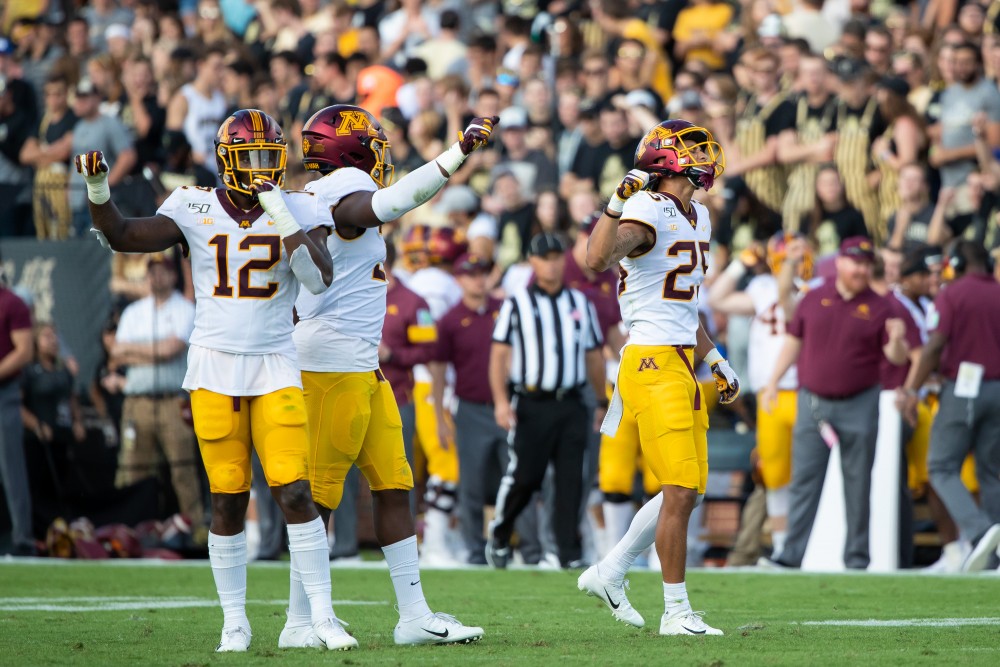 Defensive back Benjamin St-Juste, right, raises his arm with his teammates at Ross-Ade Stadium on Saturday, Sept. 28. (Courtesy of Brad Rempel / Gopher Sports)

Through the first seven games of 2019, Minnesota’s secondary has quietly put together one of the strongest seasons of any of the team’s position groups. The Gophers currently rank No. 7 in the Footbal Bowl Subdivision pass defense efficiency, thanks to a deep rotation of defensive backs.

Players throughout the unit have taken unique journeys to their current roles. Redshirt senior Chris Williamson transferred to Minnesota after playing two seasons at Florida. After beginning his collegiate career as a wide receiver, redshirt junior Phillip Howard transitioned to cornerback in 2019 and recorded his first career interception against Rutgers last Saturday. However, no Gophers defensive back has taken a more unconventional path than Benjamin St-Juste.

“He works hard every single day to get better,” head coach P.J. Fleck said of St-Juste. “He doesn’t talk a lot, he’s a pretty quiet guy, but he knows what he wants to do, he knows where he wants to go and he’s a wonderful teammate.”

A native of Quebec, Canada, St-Juste was a four-star recruit who committed to Michigan in the class of 2017. As a freshman, he played in 12 games for the Wolverines, primarily on special teams, appearing as a cornerback in one game.

The following year, St-Juste suffered a hamstring injury in spring practice, forcing him to miss all of the 2018 season. Although Michigan initially believed he had medically retired, St-Juste chose to enter the transfer portal. When defensive coordinator Joe Rossi learned the cornerback was available, he wasted no time recruiting St-Juste to Minnesota.

“It was one of those deals where he announces on Twitter that he’s leaving,” Rossi said. “Danny Collins, our quality control coach, texts me to add a corner. I literally pull over to the side of the highway to message him.”

In his first season with the Gophers, St-Juste has impressed in his limited playing time as the team’s fourth cornerback. He recorded a career-high five tackles in a 40-17 victory over Illinois on Oct. 5. St-Juste is tied for second on the team with four passes broken up.

“You don’t see too many corners who are his size who can move the way he does,” senior Carter Coughlin said. “He’s a really nice addition to what we already have. We’ve got some dynamic corners, some awesome playmakers, and he fits right in.”

With his promising play, St-Juste could be a fixture of Minnesota’s pass defense in the years to come. He has two years of eligibility remaining after 2019, giving him plenty of time to keep improving and contributing to the Minnesota defense.

“Ben has been doing a great job,” redshirt sophomore Antoine Winfield Jr. said. “He’s made a huge impact on the defensive backs and on our side. I hope he continues to do that for us.”

Thus far, St-Juste has impressed coaches with his intangibles and physical attributes. At 6-foot-3, he has good length for a corner, something Rossi says he prioritizes. Furthermore, his positive attitude and work ethic have made him somebody the coach enjoys working with.

“He’s a kid I’ve really enjoyed getting to know,” Rossi said. “We heard nothing but good things about him at Michigan because there’s a lot of guys there I’ve worked with in the past. He’s incredibly long, incredibly athletic. His flexibility for his size is uncanny. And then he’s a smart kid who cares with great character.”

Although St-Juste is the same age as most college juniors, he received his bachelor’s degree before even joining the Gophers. Last spring, St-Juste graduated from the University of Michigan with a degree in sociology and is currently working toward a M.Ed. in sport management at the University of Minnesota.

With two years of eligibility remaining, St-Juste has plenty of time to build upon the relationships he’s already building with coaches and players. Those around him say that although St-Juste is reserved initially, he makes his personality known with time.

“He stays to himself until you get to know him,” Coughlin said. “I’ve been able to get to know him since he’s been here and he breaks out of his shell but for the most part he’s pretty reserved.”