The U is reassessing the benefits it gives to domestic partners in light of the Supreme Court ruling. 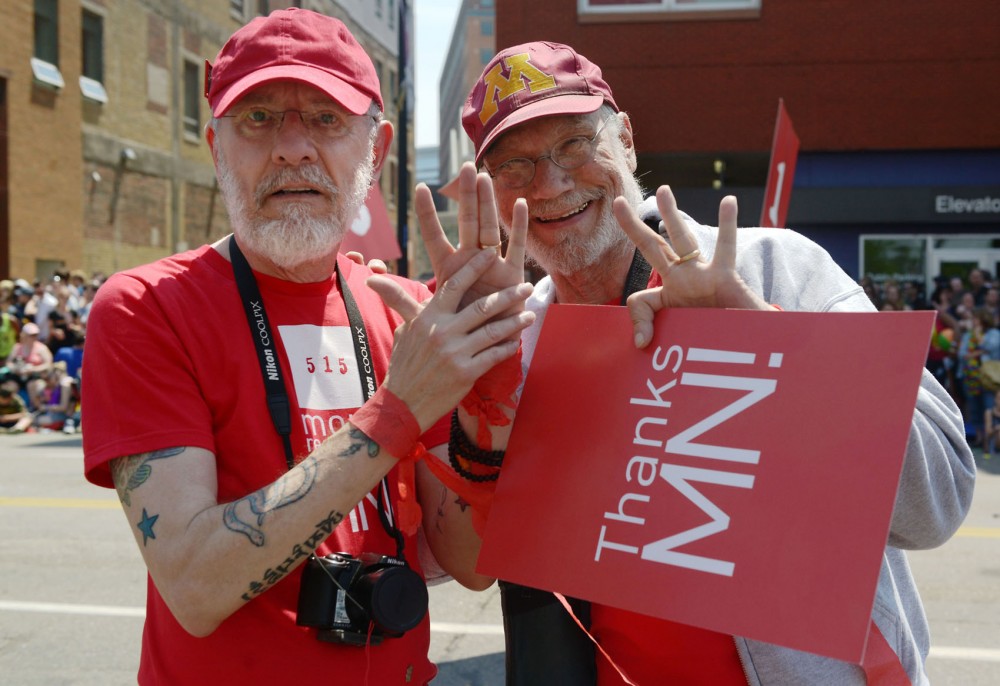 A couple shows off their rings in the Pride Parade on June 30, 2013, in Minneapolis. Many same-sex couples in Minnesota will be affected by the repeal of the Defense of Marriage Act by the Supreme Court and the passing of a marriage equality bill in Minnesota.

In the days leading up to the delayed U.S. Supreme Court decisions affecting marriage equality, Robert Smith III woke up early each morning to see if the cases had been decided.

Once the decisions came out last Wednesday, the University of Minnesota American studies graduate student said, “It was exactly what I wanted and thought what would happen.”

Although legal confusion remains over the Court’s rulings on the Defense of Marriage Act and California’s Proposition 8, one thing is clear: Many married same-sex couples at the University will now receive the same federal benefits as their straight counterparts.

For Minnesota and 12 other states where same-sex marriage is legal, the elimination of DOMA means married same-sex couples will now get the more than 1,100 federal benefits that married heterosexual couples get.

She said the University and institutions across the country will also have to decide if benefits will remain for same-sex domestic partners who aren’t married.

Systems like this one — at the University and elsewhere — “may mean that those in domestic same-sex relationships would have to get married in order to receive certain benefits,” Goodwin said.

University Office of Human Resources Director Dann Chapman said the office is working to make sure tax benefits are figured out before same-sex marriages begin in Minnesota in August, adding the Supreme Court decisions simplified their work.

He said staff will be interacting with leaders from the lesbian, gay, bisexual and transgender community to decide the best options for University employees on issues like same-sex domestic partnership benefits.

“We’re not going to rush a change,” Chapman said. “You can’t expect people to get married overnight just because the Minnesota law has changed.”

University Speech-Language-Hearing Sciences professor Benjamin Munson said he and his partner will be heading to the courthouse to get a marriage license, but they won’t have another big marriage celebration.

“We’re not the standing-in-line in-front-of-the-courthouse, holding-hands-and-crying type,” said Munson, who had a civil union in New Zealand with his partner in 2008.

Munson said he’s glad they will now have federal benefits including inheritance, taxes, social security and hospital visitation rights that even married same-sex couples didn’t have before because of DOMA.

“I look forward to the additional legal protections,” he said. “It’s great that it will make our tax burden comparable to other married couples.”

Autumn Leva, a spokeswoman for Minnesota for Marriage — an organization that supports marriage only between one man and one woman — said members were disappointed by the results of the Court’s decisions but relieved that the marriage debate remains in the hands of citizens of each state.

“[We’re] losing the federal unity of what understanding marriage is and what marriage should be … around the country,” Leva said.

But the DOMA decision didn’t clarify what will happen to these federal benefits for married same-sex couples who move to states that haven’t legalized gay marriage, Duran said.

Goodwin said the decisions suggest married same-sex couples should receive federal benefits even in states where their marriage isn’t recognized.

“These rulings in no way offer any firm clarity on how this is going to play out,” Leva said.

Despite unclear legal issues, Smith said he still knows many same-sex couples who are getting engaged.

“I think it’ll be a packed calendar,” Smith said. “You better have your dry cleaner’s number very handy next summer.”