Up to 1 billion birds die from glass collisions every year in the United States. 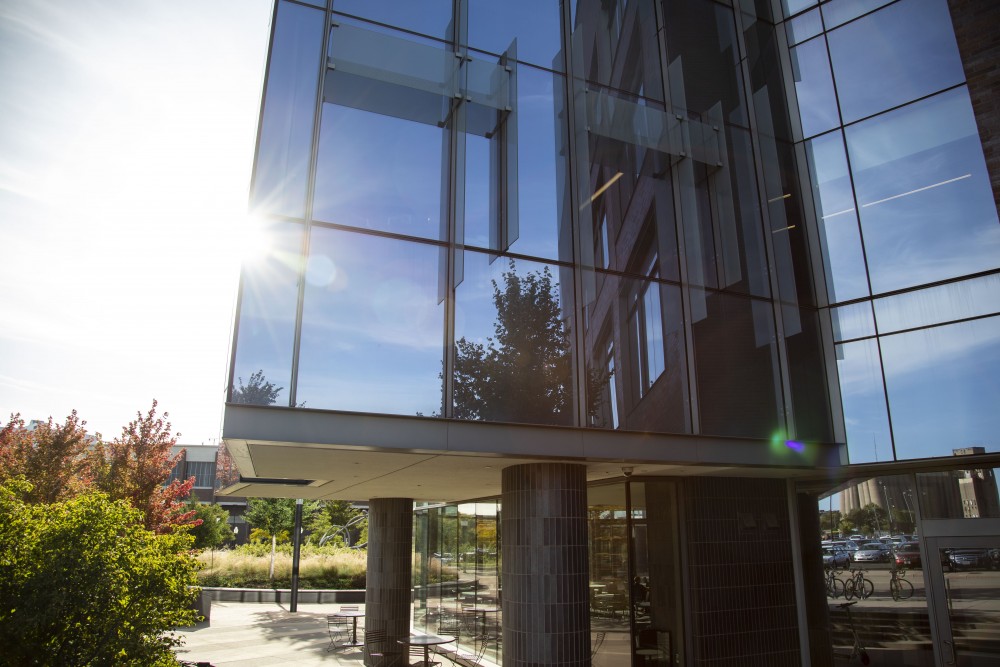 Windows outside the Cancer & Cardiovascular Research Building Building as seen on Thursday, Oct 8.

The University of Minnesota undergraduate student government passed a resolution earlier this month asking for all University buildings to be installed with bird-safe glass after some students expressed concerns for the local bird population.

The resolution asks that all new campus buildings have bird-safe glass, or “fritted glass,”  included in their design and that glass on older buildings be replaced with the same material or given visual markers that help birds avoid the windows.

“Birds can’t perceive glass … to them, it looks like air,” said Todd Arnold, a University fisheries and wildlife professor, noting that the highly reflective glass can look similar to the birds’ natural habitat if trees are nearby.

Kelly Shanahan, from the Minnesota Student Association and the main author of the resolution, said she was inspired to call the University to action after working for the University Raptor Center. There, Shanahan worked with many birds who had been injured due to collision with glass, either suffering from broken bones or brain injuries.

According to the American Bird Conservancy, up to 1 billion birds die from collisions with glass each year in the United States. Experts say the actual number of deaths is difficult to determine.

In the past two semesters of Arnold’s Introduction to Fisheries, Wildlife and Conservation Biology course, students examined bird deaths on the University’s East Bank, West Bank and St. Paul campuses. Arnold had his students survey different University buildings, and in spring 2019, the students from both classes discovered a total of 134 dead birds. Things like fritted glass, Shanahan said, would help decrease the number of bird deaths. Fritted glass is glass that has been printed with a custom pattern, such as dots or stripes, and can also be energy-saving and cost-beneficial.

“Fritted glass is something that was actually developed to be a sustainable and economic way to reduce heating and cooling costs in buildings,” Shanahan said.

Northwestern University in Illinois, which shares Big 10 University status with the University of Minnesota, took its own action in 2018 to make its campus more bird-friendly by using fritted glass in buildings and putting special film on windows.

Some University buildings are already installed with this special glass, according to the University’s Sustainability Director Shane Stennes. These include the Bell Museum, Athlete’s Village and the Health Sciences Education Center.

“As funding is available to do bird mitigation work on buildings across campus, U Services assists in addressing the unique aspects each building represents,” Stennes said in an email to the Minnesota Daily.

Arnold said that none of the dead birds found in his classes were near University buildings fitted with the bird-safe glass.

“Our University’s impact on wildlife is something that needs to be evaluated if we’re going to continue our claims about being a sustainable campus,” Shanahan said.