Gophers ready to host and play on Friday 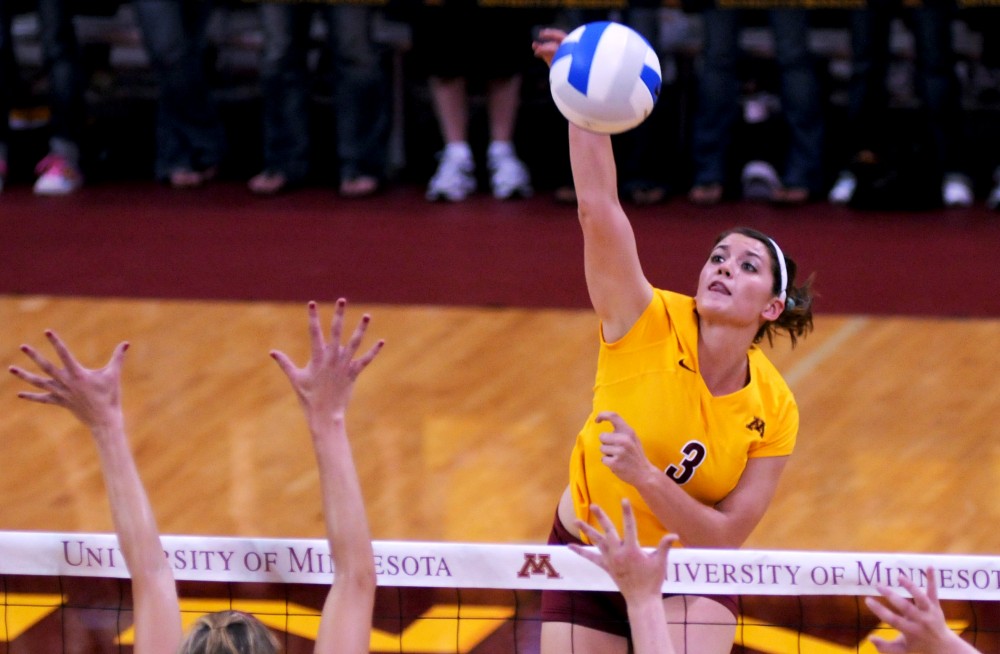 With an eight-match winning streak and a roster that is drawing closer to full strength each day, the Minnesota volleyball team looks ready to enter the NCAA tournament. The Gophers, ranked sixth overall this year, are hosting the first two rounds, taking on North Dakota State in the opening round Friday at the Sports Pavilion. Should Minnesota win, it will face the winner of the Northern Iowa/Iowa State match in round two, which will take place Saturday. Both rounds for the Gophers begin at 7 p.m. Senior outside hitter Kyla Roehrig has been to the tournament three years before this one, and as she is about to play her first home playoff match, she reflected on what it meant to her. âÄúWeâÄôve been shipped everywhere in the past,âÄù she said. âÄúTennessee, New York and then Stanford last year. Now itâÄôs finally our chance to play at home, and I think itâÄôs going to be a great experience, especially for the seniors.âÄù But donâÄôt expect Minnesota to spend much time basking in the light of the moment, as the Gophers know exactly how quickly this tournament can end. Last season, Minnesota lost in the first round of the tournament, as Sacramento State jumped ahead of the Gophers early and sent Minnesota home. The Gophers were not as experienced a team last season however, and have done a better job in tight situations this year. For these reasons, junior libero Christine Tan said she doesnâÄôt expect a repeat of last yearâÄôs exit. âÄúWe learned from last year, the first and second rounds are tough,âÄù she said. âÄúOnce we dropped a set last year, we felt a little pressure and that hurt us last year. This year, we have a lot of the same people on the court so we have some experience and weâÄôve handled those situations better.âÄù Coach Mike Hebert said the teamâÄôs success in pressure situations, and its team chemistry, goes back to the small group sessions in the spring. âÄúThat group can be credited with forging that new identity,âÄù he said. âÄúWhen the freshmen got here, they passed it along to them. Now I think weâÄôre bound as tightly as we have been in a long time.âÄù North Dakota State wonâÄôt necessarily be an easy task for the Gophers right off the bat, however, as the Bison have rattled off a 19-match win streak to send them into their first NCAA tournament appearance. The Bison run a two-setter system, and spread the ball fairly evenly, as five players average at least two kills per set. Freshman middle blocker Chrissy Knuth leads NDSU with 3.1 kills per set, and is hitting .336 this season. But Minnesota has been hitting the ball well of late as well, as sophomore Hailey Cowles, senior Katie Vatterrodt and junior Pamela Luiz have filled in nicely in sophomore outside hitter Brook DieterâÄôs absence. Roehrig is also swinging well of late, averaging three kills per set since Dieter went down with her ankle injury. Tan said the Gophers are happy overall with where they are at right now, as no major adjustments are needed. âÄúRight now, we just need to be crisp,âÄù she said. âÄúWeâÄôre so used to the season that all we need to do now is make sure that we do all the basic things as cleanly as possible. WeâÄôre at a point where weâÄôre just tying up the loose ends and taking care of the little things.âÄù