Sara Groenewegen is 11-0 and has eight home runs in her first year on campus. 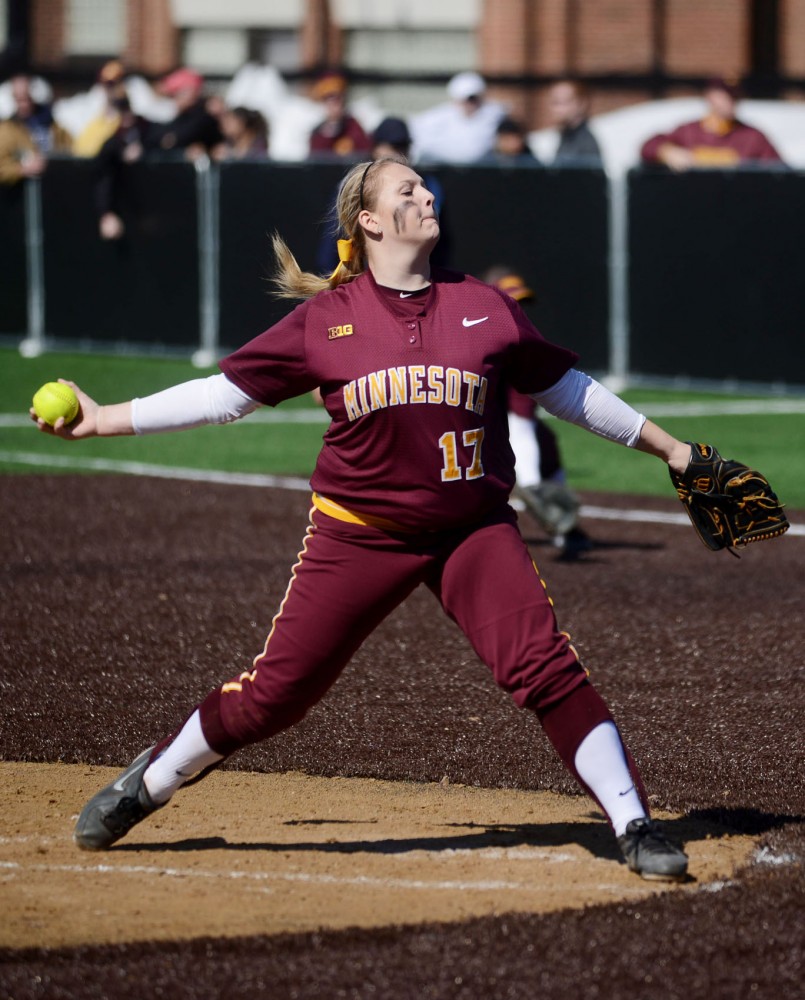 This season has been a dream come true for pitcher Sara Groenewegen.

The British Columbia native has produced absurd numbers, with a perfect 11-0 record in the pitcher’s circle and eight home runs in the batter’s box this year.

She’s been named Big Ten Pitcher of the Week, she struck out 126 batters in 77.1 innings of work and she has taken a no-hitter deep into a game on one occasion.

And she’s done all that as a true freshman — one who turned 19 less than a week ago.

“I’ve said it before, and I’ll say it again — age is just a number,” Groenewegen said.

It may be just a number to her, but to everyone else, it’s something that makes the rest of her numbers that much more impressive.

“I’ve never seen her intimidated by a situation,” Allister said. “She’s tough as nails, and she wants the ball in her hand.”

Her fearlessness allowed her to take down three ranked teams this year and pitch a no-hitter for Team Canada in a junior national competition last year. Her competitive nature fuels her drive to improve both as a pitcher and as a hitter.

Most pitchers rely on designated hitters in the batter’s box, but Groenewegen is different. She swings for herself and takes cuts as the cleanup hitter.

In that spot, she has crushed eight home runs — good for second on the team — and driven in 29 runs.

Still, as much as she loves hitting for herself, Groenewegen said pitching is her top priority.

“I love hitting,” she said, “but pitching is where it’s at.”

Groenewegen is a power pitcher and a power hitter. She smacks home runs and strikes out batters with rising fastballs they simply can’t keep up with.

Gophers first-year catcher Taylor LeMay said that makes her fun to catch for.

“She throws hard and hits her spots all over the zone,” LeMay said. “It’s a ton of fun to catch for somebody who strikes out so many batters.”

In short, Groenewegen is a strikeout pitcher and a home-run hitter. She ranks fourth nationally in strikeouts per seven innings pitched with 11.4, and her eight home runs are good for fifth in the Big Ten.

“She’s always pumping her fist, yelling and getting excited,” LeMay said, “and that gets all of us pumped up.”

Before she excited her teammates with fist pumps and Gophers fans with strikeouts, the girl nicknamed FES — short for “foreign exchange student” — by her teammates was exciting the Canadian Senior Women’s National Team with her skills. Groenewegen helped lead Team Canada to a fifth-place finish at the International Softball Federation Junior Women’s World Championships last year.

She went on to start a game with the Canadian Senior Women’s National Team and picked up a win in her first appearance.

Still, even with the success in her native country, Groenewegen always knew she wanted to play college ball in the United States.

“I know sports here are more competitive than they are back home,” she said, “especially at the NCAA level.”

She laughed when asked why she picked Minnesota.

“I didn’t even know what Minnesota was before I got recruited,” she said, her cheeks changing to match her maroon jersey. “I felt like the coaching staff here sold the program to me, and I knew I wanted to play for them.”

As for moving nearly 2,000 miles to play ball, Allister said it goes back to the same fearlessness that has enabled Groenewegen to find success so far from home.

Groenewegen said her mentality on the field has made all the difference this season.

“It’s easy to be intimidated as a freshman,” she said, “but I just have to have the mentality that I can be successful against anybody I want to be.”