Students are growing food in south Minneapolis farms for a local restaurant. 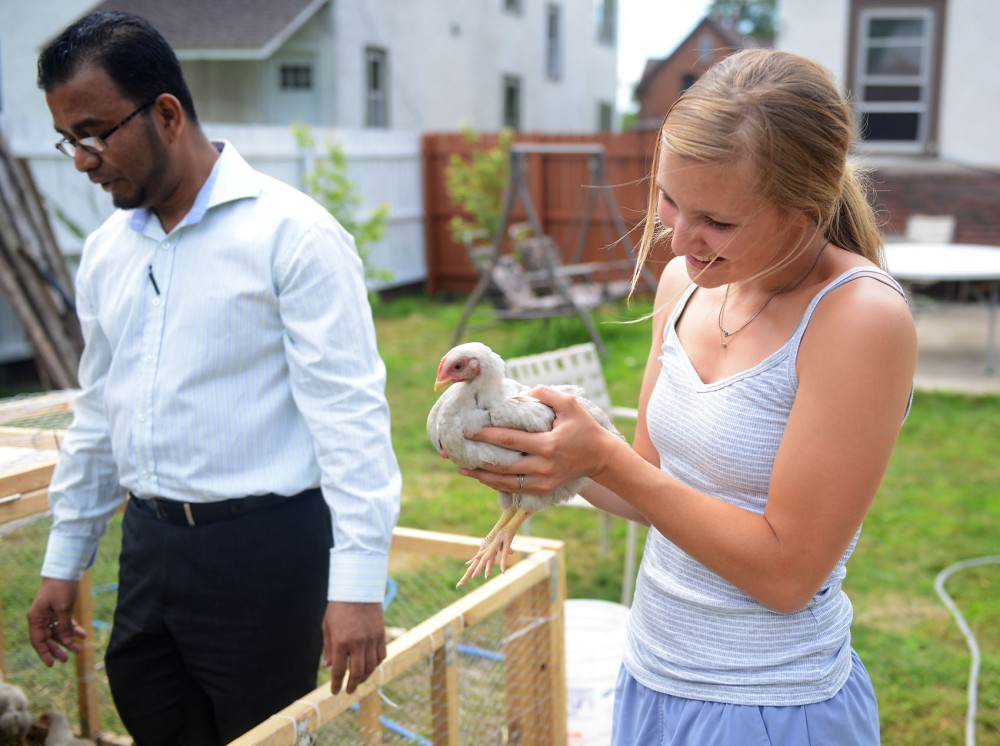 Farm to restaurant coordinator Corrie Weikle is passed a chicken from Gandhi Mahal, owner Ruhel Islam, at one of the plots in the Longfellow neighborhood of south Minneapolis, Thursday afternoon.

But the biology, society and environment senior is doing more than just pulling weeds.

Several University of Minnesota students like Schramm have dedicated their summer to creating a sustainable farm-to-restaurant supply model for a business in South Minneapolis with hopes of transforming the way people think about food.

The project started last summer after Julia Frost-Nerbonne, environmental sustainability program director for the Higher Education Consortium for Urban Affairs, noticed her students wanted to farm but had no means to do it.

Frost-Nerbonne partnered with Ruhel Islam, the owner of Gandhi Mahal restaurant in South Minneapolis, to start a garden that would provide him with fresh, local food.

This summer, the program has a dozen gardens near the restaurant, which will provide Islam with about 10,000 pounds of produce.

Islam said he hopes his restaurant can be entirely self-sufficient in the next five years through the gardens and greenhouses.

He paid the gardens’ startup costs and will pay the student workers for the produce.

“This is my dream,” Islam said. “Since I was a little boy, I was very passionate about food.”

Islam is originally from Bangladesh, where food shortage is a problem.

But food insecurity isn’t just a problem for other countries. To tackle food disparities at home, HECUA also works with north Minneapolis youth to teach them how to grow their own gardens.

After his days in the gardens, Schramm works every night on a research paper for the project, which will act as a template for future urban farmers.

“We plan to make this a regular fixture,” Frost-Nerbonne said.

Although it’s only worked with Gandhi Mahal so far, HECUA plans to partner with more restaurants and community members in the future.

But the cost of transportation and cold food storage could cause setbacks.

“The reality is, the deck is stacked against us,” Frost-Nerbonne said.

The project is trying to raise funds through a Kickstarter campaign, which will allow them to purchase essentials like rickshaws for transportation, chicken coops and a cold storage system.

In addition to purchasing supplies, the project hopes to use the funds for licensing fees to become an official business.

“It gives us a much greater connection to our food,” she said. “I think that’s really beautiful.