Amanda Zahui B. was a force down low as the Gophers beat North Dakota. 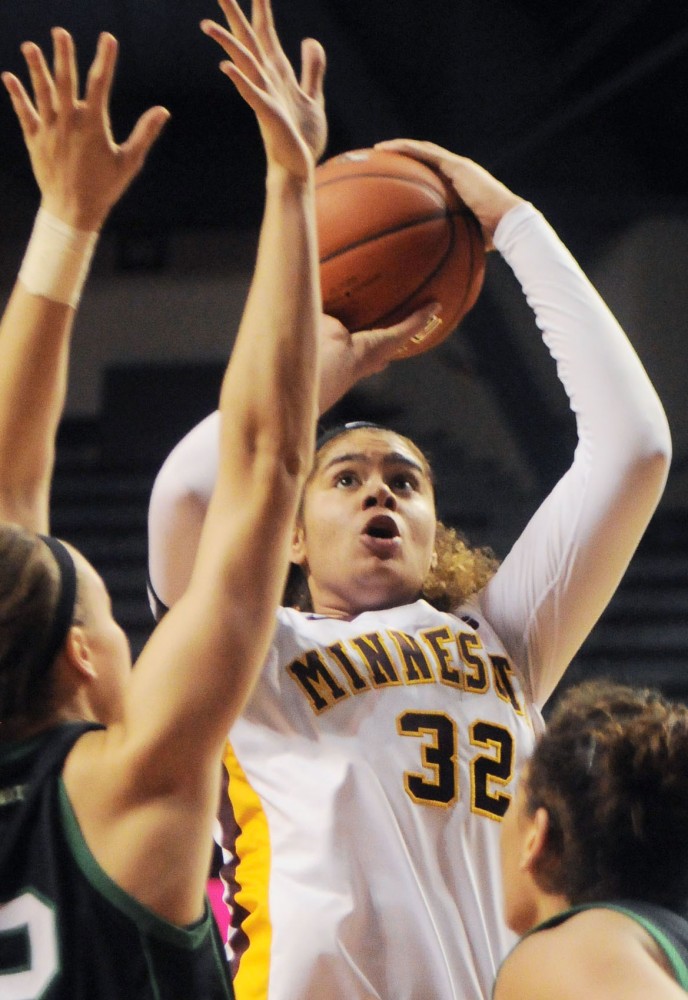 Rachel Banham didn’t play Sunday because of a right knee injury, and that spelled trouble for the Gophers — until the second half.

Minnesota (9-2) topped North Dakota 46-44 but trailed for most of the game, and by double-digits at halftime.

“We found out what our team looks like without Rachel,” head coach Pam Borton said. “Rachel … is a great scorer, and she makes everybody else look like they’re a great scorer. She facilitates; she makes things easy.”

Minnesota played a haphazard first half, shooting 6 of 22 from the field for just 18 points. It also turned the ball over 11 times.

In the second half, the Gophers bounced back with a steady diet of redshirt freshman center Amanda Zahui B.

She led the way for the Gophers with 25 points and 12 rebounds, scoring nine straight points for her team in the second half.

Borton said Zahui B. did everything in her power to get the Gophers the win.

Zahui B. said her mindset was to score every time she was down the floor in the second half.

“I had to establish myself as a scorer,” she said. “I didn’t really do it in the beginning.”

Still, the Gophers found themselves deadlocked with North Dakota at 44-44 with 20 seconds left on the clock.

Minnesota called a timeout, and Shayne Mullaney drove to the basket and hit a layup that gave the Gophers a 46-44 lead with three seconds remaining.

“I just knew we had to make a play,” Mullaney said. “The whole game was kind of rough.”

With Banham out, Mullaney had more responsibility from a ball-handling standpoint, and she delivered. Borton said the game showed how far Mullaney has come as just a sophomore.

Banham “tweaked” her knee in the first half of Thursday’s 74-67 win over Miami and was helped to the locker room. She came back in and played the entire second half, finishing with a game-high 27 points.

She didn’t play at all against North Dakota (3-3).

The Gophers, who have only 10 players on the roster, had just eight players available Sunday after injuries.

Borton said she expects her star player to be back by the next game, and she said keeping her out against North Dakota was more of a precautionary move.

“With us going into a 12-day break, it was probably the smart thing to do for the long term of our season,” Borton said. “There are bigger games down the road.”