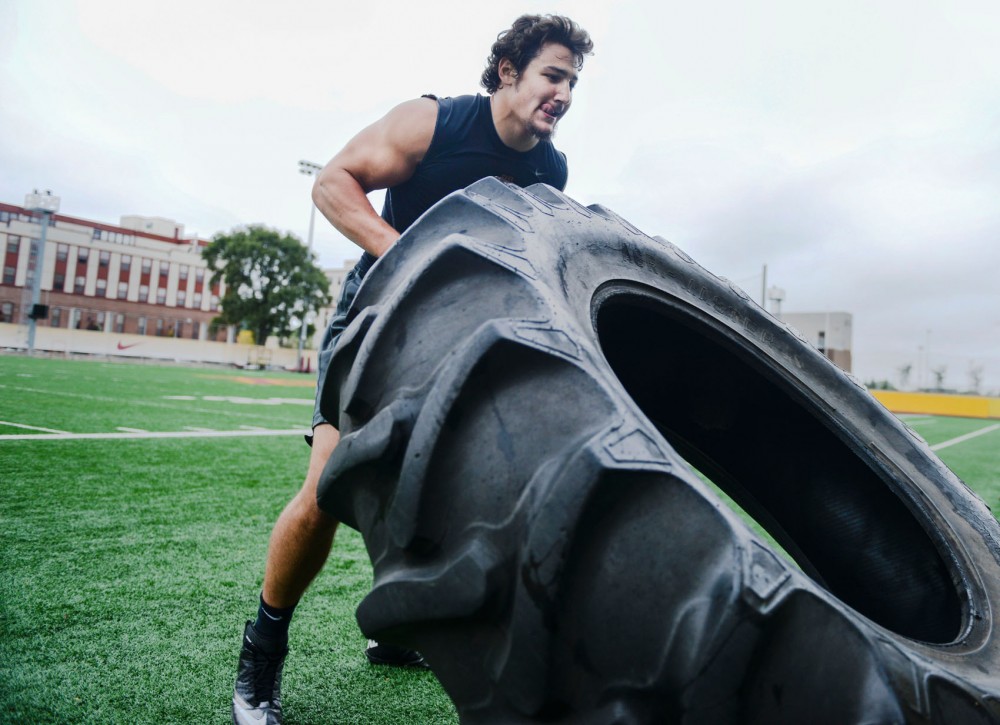 Former gopher linebacker Mike Rallis does tire lifts during his workout on Friday, Oct. 4, 2013, at the Gibson-Nagurski Complex. Rallis was one of five athletes to try out for the World Wrestling Entertainment earlier this month in Orlando, Fla.

“I was going nuts like my favorite team had just won the Super Bowl,” he said. “I picture myself in that situation when I want to dream about reaching the top.”

Rallis is now getting a shot to live out that dream. He was one of five athletes to try out for the WWE earlier this month in Orlando, Fla., and was invited back for a second tryout in December.

The Carlson School of Management double major played for the Gophers from 2008-12 and was the team’s second-leading tackler last season. He said he was hoping for a shot with an NFL team but has since moved on to the WWE.

“They kept talking about how it’s not just a job — it’s a lifestyle,” Rallis said. “And that’s exactly what I’m looking for.”

Rallis first became interested in WWE after his older brother, Matt, introduced him to the sport in the late 1990s.

He never wrestled competitively but followed the WWE throughout high school and college, even as he pursued a football career.

After his career with the Gophers, Rallis chased his NFL dream. But when the summer went by without a professional offer, he started considering the WWE.

Rallis reached out to longtime WWE announcer Jim Ross and said he spent about an hour on the phone with him.

Rallis said Ross told him “the best way to make a great impression is to come in and show you’ve been working your butt off.”

Rallis also reached out to Minnesota head strength and conditioning coach Eric Klein, who provided him with a training program specifically tailored to the WWE tryout.

Rallis dubbed the training program, based on mixed martial arts conditioning, “The 26 Days of Badassness.”

He said some of the workouts were the toughest he’d ever endured.

Rallis flew to Orlando in early October for the tryout.  The five hopefuls participated in workouts measuring strength and explosiveness and learned basic wrestling moves, he said.

On the third day, Rallis had a chance to show off his personality. He said he hasn’t developed an exact wrestling persona yet but hinted the potential persona could play off his Greek heritage.

He said the WWE officials told him they were pleased with his on-camera charisma.

On the last day, the five athletes got a backstage tour of WWE tapings. Rallis said he met Dusty Rhodes, Triple H and Alberto Del Rio — some of the wrestlers he grew up watching.

The officials told Rallis after the last workout they wanted him to come back in December, he said.

“I left it all out there in the ring those three days,” Rallis said. “For them to say that you did a good job, it feels good there’s some payoff for that.”

Rallis isn’t the only Gophers football player interested in the WWE. Many current players are into it as well.

“If you went into the locker room and just started naming [WWE wrestlers], I feel like a lot of people would know who you’re talking about,” senior linebacker Aaron Hill said.

Rallis said that one day during camp last year, the players skipped dinner and spent an hour imitating their favorite WWE wrestlers.

Then last winter, Rallis and his younger brother, current Gophers linebacker Nick Rallis, brought a plastic wrestling belt into the locker room and hung a poster with league rules.

With that, the Locker Room Wrestling League, or LWL, was born.

“Guys had fun with it,” Rallis said. “And then we started filming it and developing our own story lines.”

Rallis said the team had big plans for the LWL, but summer break spoiled them.

“It never really took off like we wanted it to,” he said. “But we had fun with it.”

Nick Rallis said he thinks the WWE is a perfect fit for his older brother because of his passion for physical fitness.

Mike Rallis has continued working out since the end of his Gophers career. He even took up pickup basketball to satisfy his competitive drive.

“I miss that something to be passionate about,” he said. “I’m hoping this can be the next step for me.”

Hill said the WWE would be a good fit for Rallis and said he would even consider trying out himself if Rallis is successful.

Now, Rallis is training for the next tryout. Klein volunteered to make him another training regimen, which will last about eight weeks.

“This year, I got to strap on an NFL helmet,” Rallis said, “I also got to step into a WWE wrestling ring, and I don’t think a lot of people can say that — especially not in the same year.”