So far this season, the team is passing the ball much more often than last year. 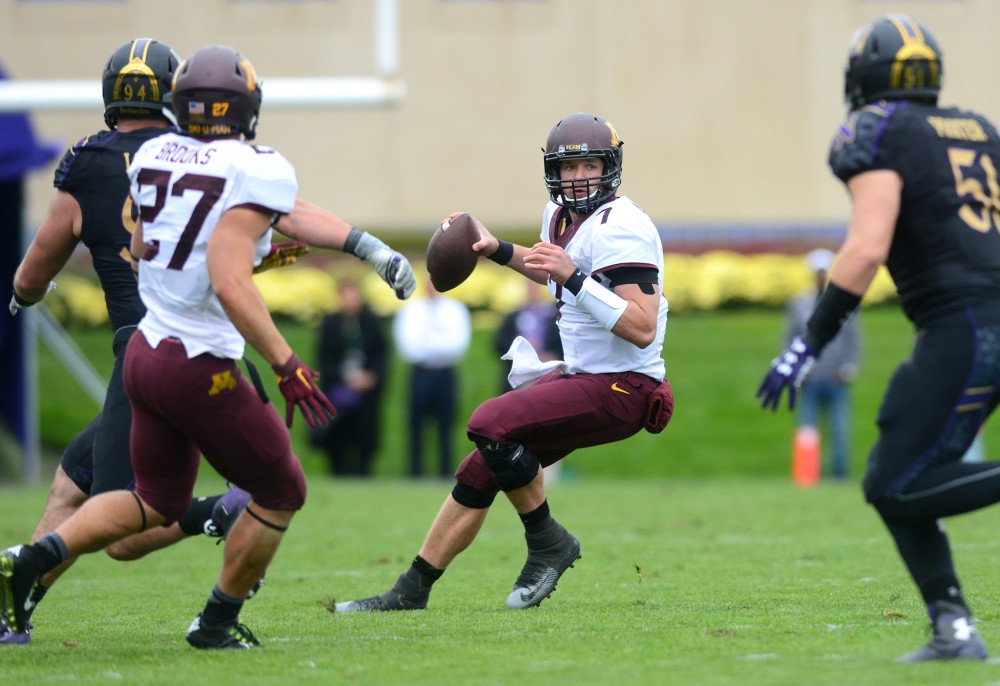 Quarterback Mitch Leidner prepares to throw the ball at Ryan Field, where Minnesota fell to Northwestern University 27-0 on Saturday afternoon.

Ryan Falk
The Gophers offense has struggled this season, and the team is taking unique measures to right the ship.
After Minnesota gained only 173 yards against Northwestern University, the team did something it doesn’t usually do. On Sunday, the offense met as a whole to watch film, instead of just by position group.
“First time with this group,” head coach Jerry Kill said. “They needed to understand the big picture.”
Kill blamed himself for the poor performance offensively and said he was watching the game tape until midnight on Sunday.
Kill said the blowout loss to Northwestern has him ready to get back to work because he knows Minnesota fans are restless.
“I’ve been more motivated this week than I’ve been all year because I’m not happy; the fans aren’t happy,” Kill said. “Everybody’s got a right not to be happy.”
Redshirt junior quarterback Mitch Leidner especially struggled against Northwestern, throwing for only 72 yards on 21 attempts and turning the ball over twice.
However, Kill said it was important that the players understand it wasn’t one player not executing, but the entire offense as a whole.
“Every one of them had a breakdown or two,” Kill said.
Kill declined to comment on whether Leidner would start this weekend’s game against Purdue. Freshman quarterback Demry Croft replaced Leidner in the fourth quarter against Northwestern but also struggled.
“Offensively, as a unit, we’ve got to come ready to play and get those juices flowing and get excited to be out there,” Leidner said.
The offense looks different this season than in previous years under Kill. The Gophers have been a more pass heavy team so far than they were last year.
The Gophers attempted 32 passes against Northwestern, which Kill said was too many. The team also attempted 35 passes in their season opener against TCU and 45 against Colorado State.
“That isn’t who we are,” Kill said. “That’s not how we’re going to be able to win in the Big Ten.”
Kill said they needed to find a way to get the ball to their skill players more often, especially the two running backs: redshirt freshman Rodney Smith and freshman Shannon Brooks.
“We’ve got two great running backs,” Kill said. “We need to play to those guys’ strength. We need to run the ball.”
Minnesota only ran the ball 33 times against Northwestern and averaged 2.2 yards per carry. Two weeks ago, the Gophers ran 36 times against Ohio University, averaging 5.7 yards a carry.
The offensive line has also faced injuries all season, and the unit was dealt another blow when redshirt senior offensive lineman Joe Bjorklund left in the second quarter
against Northwestern.
Offensive coordinator and offensive line coach Matt Limegrover said fixing the line is key to the offense hitting its stride again.
“Once that get’s worked out and gets back on track, then the other things will start to come,” Limegrover said.
The offense’s struggles have made things difficult for the Gophers, but Kill said adversity is nothing new for the team.
“When you got your back against the wall, you feel sorry for yourself, or you can bow up and compete,” Kill said. “We’re going to bow up and compete.”
Delete Image
Align Left
Align Center
Align Right
Align Left
Align Center
Delete Heading