The Gophers were defeated by Purdue in extra sets on the road on Saturday. 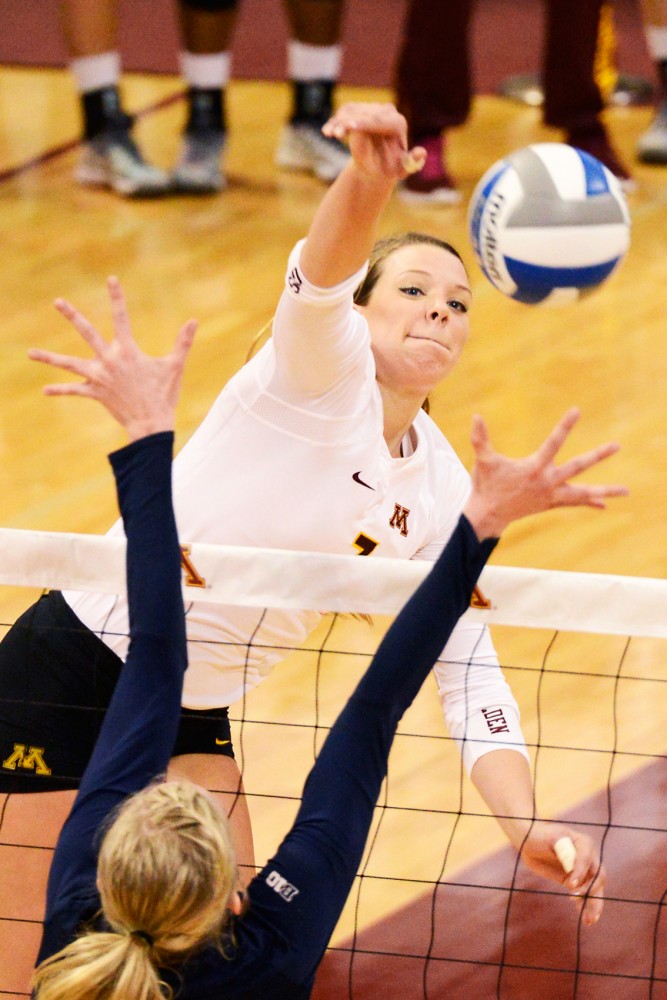 Middle blocker Hannah Tapp spikes the ball against Penn State in the Sports Pavilion on Nov. 14, 2015.

Emily Polglaze
The Gophers came close to making a comeback on the road on Saturday but came away with their second conference loss of the season.
Minnesota rallied after being down 2-0 in its match at Purdue but ultimately fell to the Boilermakers 3-2.
“We made a few too many unforced errors, and uncharacteristically we struggled in the serve-receive,” head coach Hugh McCutcheon said. “I’m proud of the way our athletes battled. We were able to gut it out in that third set and take it to a fourth and fifth. It’s just a shame we couldn’t finish it.”
No. 3 Minnesota (24-4, 16-2 Big Ten) began the match strong, getting out to an 11-8 lead  in the first set. No. 15 Purdue (22-7, 13-5 Big Ten) answered back quickly, though, going on a run to go up 17-12.
The Gophers tied the score at 20-20, but Purdue took a timeout and closed out the set to win 25-22.
The teams remained close in the beginning of the second set, but Purdue took the lead at 14-11. Minnesota came back with four points capped off by two kills from junior middle blocker Paige Tapp to claim a 15-14 lead.
The Boilermakers took the set from there, though, winning the second set 25-19. Minnesota hit .051 to Purdue’s .300 in the second set.
“I think as a team we started a little slow,” senior captain and outside hitter Daly Santana said. “Our serve and pass wasn’t as consistent, so we talked about fixing that.”
The third set began similarly to the first two, and though Minnesota had an early lead, Purdue went up 18-13, and Minnesota called a timeout.
The Gophers stayed close from then on, and the set was tied 23-23 on a Boilermakers attack error. Purdue got to set point at 24-23, but an intense back-and-forth ensued.
Minnesota spoiled set and match point for Purdue nine times.
The set was undecided until a Purdue attack error and a kill from junior middle blocker Hannah Tapp gave the Gophers a 34-32 victory.
The Gophers made an energetic comeback in the fourth set and took a 17-11 lead.
Purdue added eight more points in the set, but a kill from Santana took Minnesota to set point, and Hannah Tapp finished the set with a kill for a 25-19 victory, tying the match at 2-2.
The Gophers hit a match-high .520 in the fourth set.
Purdue quickly put up four points in the fifth set, and though Minnesota was able to come within one point three different times, the Boilermakers took a solid lead at 8-5 and eventually earned the 15-9 fifth set victory.
Minnesota bested Purdue in kills, assists, hitting percentage and digs but couldn’t obtain the road win.
The loss snapped the team’s 15-match winning streak, which was tied for the program record set in 2000.
The Gophers remain in first in the Big Ten despite the loss and have two regular-season matches remaining.
“I think we learned a lot about ourselves,” Hannah Tapp said. “Obviously we hate to lose, but if we can learn something from it and in turn set up to be successful in the
postseason, then I guess we’ll take it.”
Delete Image
Align Left
Align Center
Align Right
Align Left
Align Center
Delete Heading