A&E talks with Portugal. The Man about their new LP and their profound love for The Beatles. 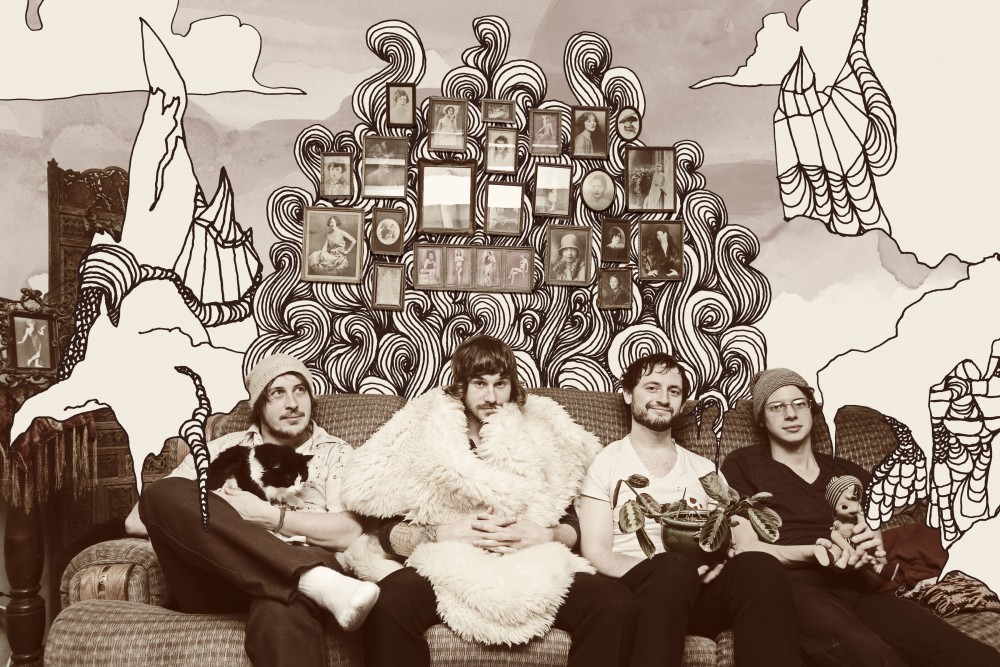 Portugal. The Man are from Alaska. Maybe that’s why their Snuggie is so advanced. PHOTO COURTESY EQUAL VISION RECORDS

Portugal. The Man ALBUM: âÄúThe Satanic SatanistâÄù LABEL: Equal Vision Records Alaska natives and Microsoft Word grammar flipper-offers âÄúPortugal. The ManâÄôsâÄù fourth LP, âÄúThe Satanic Satanist,âÄù is by no means a large departure from the type of rainbow-colored, soul-infused pop of their former works. But theyâÄôre OK with that; they just want to make tunes that reflect the oldies radio-inspired sing-alongs of their childhoods. A&E chatted with vocalist/guitarist/lyricist John Baldwin Gourley , avoiding the most obvious question (âÄúWhat does your band name mean?âÄù*) and instead accidentally unleashing the musicianâÄôs love for The Beatles , which, as it turns out, is vast. If âÄúThe Satanic SatanistâÄù was to your bandâÄôs career what one of The BeatlesâÄô albums was to theirs, which would it be? I guess it would be closest to âÄúRevolver.âÄù ItâÄôs dark at times, but really itâÄôs just a collection of songs. ItâÄôs not the concept album that album âÄúAbbey RoadâÄù turned out to be, and itâÄôs not crazy s—like the âÄúThe White Album .âÄù Honestly, when I came down to it, we talked about The Beatles so much when we put this album together, just because they really focused on what everybody was trying to do. Everybody was trying to pull off these crazy psychedelic sounds and forgetting the one thing necessary to the music, which was the songs. [Long discussion about The Beatles âÄ¦] The Beatles gave everybody pop songs with substance; there was a history to every song. They told stories about their lives, and they said what needed to be said. Those songs were so huge for a kid, to imagine these scenes that were playing out. ItâÄôs not often you find a lyricist in a band that can write songs as well and a songwriter being able to write lyrics. ItâÄôs a weird handoff to be handed both. Being from Alaska, are you asked to explain Sarah Palin all the time? We are from obviously different scenes. We donâÄôt run with the same crowd. Alaska being the place that it is, you know the groups; you know that person. You know people that are exactly like her, you know where sheâÄôs coming from. The thing I compare it to the most is the dad of one of my best friends growing up. He is the type of guy that read his kid The Book of Revelations before bed. Speaking of dads, you originally considered the name âÄúPortugal. The ManâÄù for a book about your father. Can you summarize one hypothetical chapter for this book? There was a point when I gave my dad a tape recorder and had him record all these stories; he has a really great gift for telling stories. We gave him a tape recorder, and heâÄôs hidden the tapes somewhere. I wanted to take his stories and make a character out of it, make it fictional. Now I feel like itâÄôs more of a family thing. I hear you guys travel by van rather than bus. What is your van like? We had a van that was the worst piece of s— IâÄôve ever known in my life. It broke down every tour we did and cost us thousands of dollars to fix every couple weeks. We have a new one that does really well. After touring as much as we have and making no money for this long, the idea of spending 30, even 20 thouâÄô a month on a bus is out of reach and almost unnecessary. What is one of your favorite albums this year? Fever Ray [a project of Karin Dreijer Andersson of The Knife] is so amazing âÄî so, so good. ItâÄôs one of those things you really canâÄôt define. Hearing it with the wrong reference points gives you the wrong impression of it. I first heard The Knife with the wrong reference point and it made me think of techno, but when you get into it, itâÄôs metal, itâÄôs punk rock. ItâÄôs âÄî in such a classy way âÄî the darkest thing IâÄôve ever heard, but also itâÄôs light and itâÄôs beautiful. She really has a way with songs and sounds and a crazy way with songs. Both Animal CollectiveâÄôs âÄúMerriweather Post PavilionâÄù and Dirty ProjectorsâÄô âÄúBitte OrcaâÄù are being called the albums of the year. Are you a fan of either? You know, we actually just listened to both. Dirty Projectors live is so amazing. I think itâÄôs a really great movement; itâÄôs something new. ItâÄôs so hard to create something new. I donâÄôt know if itâÄôs something that I necessarily connect with on the sort of level I connect with albums. That comes from a Beatles kid. * GourleyâÄôs response when Emotionalpunk.com asked the question: âÄúI’ve already answered this like four times in the last week. [pauses] Portugal is a man’s name as âÄúZiggy StardustâÄù is David Bowie … but the country is representing a group of people âÄî and the band is not just one person …âÄù