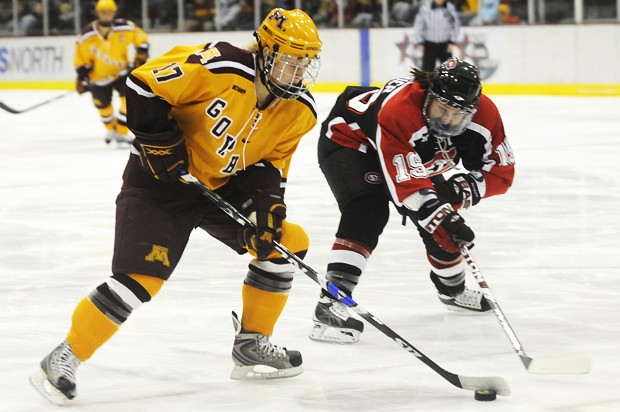 The Minnesota womenâÄôs hockey teamâÄôs second season starts tonight. The No.1 seeded Gophers (28-3-3 overall, 23-2-3-2 Western Collegiate Hockey Association ) take on the No. 8 seeded Bemidji State (6-23-5, 3-22-3-2) in a best-of-three series this weekend as part of the first round of the WCHA playoffs. The first game will be at 6:07 p.m. Friday followed by 4:07 p.m. Saturday and Sunday, if needed. Sophomore Jen Schoulli s said this weekendâÄôs games are the biggest of the year so far. âÄúIf we donâÄôt win these, we arenâÄôt making it to the WCHA championships,âÄù she said. âÄúItâÄôs a new game.âÄù This season, Minnesota has won all four matchups against the Beavers, outscoring them 26-2. Coach Brad Frost said Bemidji has just as good of a chance to advance as Minnesota does and the Gophers have to give it their best effort if they want to win. The GophersâÄô best effort will include playing an intense 60-mintues of hockey every game, he said. BemidjiâÄôs goaltending is one of its strongest positions. First-year Zuzana Tomcikova held Wisconsin scoreless throughout the first period last Saturday, recording a career-high 49 saves in the loss. Schoullis said the Gophers canâÄôt take Bemidji lightly. âÄúThey are very well coached; theyâÄôre hard workers,âÄù she said. âÄúI think we are one of the hardest working teams in the country. We have a lot of skill up front and in back; our goalies are playing well.âÄù First-year goaltender Alyssa Grogan was named the WCHA Defensive Player of the Week and the WCHAâÄôs goaltending champion. She earned goals-against average of 1.37 during conference games. In front of Grogan, first-year Monique Lamoureux came out of the regular season as the WCHA scoring champion. She scored 61 points against conference opponents. The last Gophers hockey player to earn the title was Erica McKenzie in 2005-06. Frost said that if his team comes prepared this weekend, the results will hopefully take care of themselves. âÄúWe knew we had to win games to win the championship,âÄù Frost said. âÄúWe accomplished our first goal, but now itâÄôs kind of the second season.âÄù