Räty hangs up skates after loss to Sweden

Noora Räty made her announcement via her personal Twitter page. 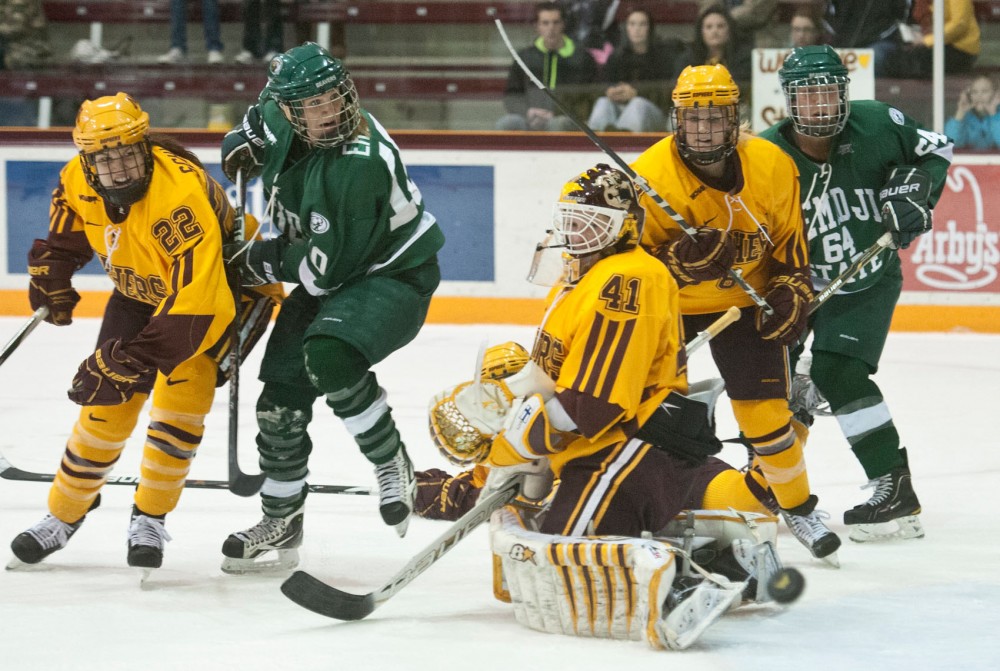 Minnesota goalie Noora Raty blocks a shot during a game against Bemidji State on Jan. 21, 2012 at Ridder Arena.

RÃ¤ty, 24, has been part of the Finnish national team since she was 15 and is one of the top female goaltenders in the world.

She is currently competing in her third Olympics, but Finland was eliminated from medal contention after a 4-2 loss to Sweden on Saturday.

“[B]efore the season started, I made a decision that my national team career will end here in Sochi,” RÃ¤ty wrote in a letter she released on Twitter.

RÃ¤ty played for the Gophers from 2009-13 and was in net for back-to-back national championships.

She said in the letter that she will hang up her skates for good if she can’t play in a competitive league next season. She played a few games in a Russian league earlier this season and wrote that she didn’t feel challenged enough.

In North America, there is the Canadian Women’s Hockey League. A number of former NCAA players gravitate to it, but players are not paid at that level.

In her letter, she called for the formation of a professional league in North America.

“I don’t feel that women’s hockey can grow or get any better in the future if the USA or Canada [doesn’t] get a professional league started soon,” RÃ¤ty wrote. “That is the next critical step that our sport needs to take, or our sport will never be respected like it should be.”

Gophers head coach Brad Frost, who coached RÃ¤ty for four seasons, said he hopes to see the formation of a professional league within the next decade.

“What they need certainly is attendance and people that are drawn to the game of women’s hockey,” Frost said Saturday after his team beat Wisconsin in front of announced crowd of 13,573 in Madison, Wis. — an NCAA record for attendance at a women’s hockey game.

The Olympics has helped add to the national interest in women’s hockey.

“It’s drawn more attention to the sport, so hopefully in the next five to 10 years, we’ll have something where our players can get out there after college and continue to train,” Frost said.

With such a league not available, RÃ¤ty wrote that the stress of working full time while also training for the Olympics was a challenge.

Still, her retirement is conditional.

“I would love to take on the challenge and try playing with men,” RÃ¤ty wrote.

Frost said the retirement wasn’t really a surprise to him, but he pointed out that the letter was written just after Finland’s loss.

“It was within 24 hours within the game, and a few months from now, she may change her mind,” he said. “Who knows? I mean, she’s still pretty young.”