The event is the largest medical device conference in the world. 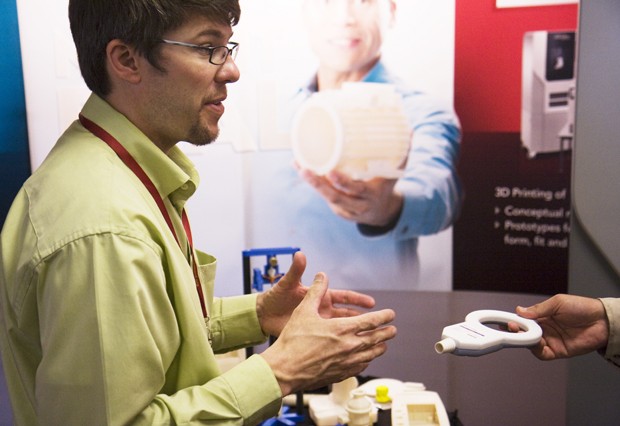 Matt Havekost of Stratasys explains how a 3D printer makes intricate prototypes to a conference attendee at the 2010 Design and Medical Devices Conference on Wednesday.

Minnesota has the greatest density of medical device companies in the world, and once a year all the different sectors of this highly competitive industry come together in a unique way on the University of Minnesota campus. The annual Design of Medical Devices Conference, which began Tuesday at both the Radisson University Hotel and McNamara Alumni Center, is the largest medical device conference in the world and hosts more than 500 companies in the industry. The variety of people representing the medical device industry is the strength of the conference, according to Dr. William Durfee, a mechanical engineering professor. Durfee, who is the conferenceâÄôs program chairman, said academic researchers, executives representing both large and small companies, lawyers, patent attorneys and venture capitalists are all well-represented at the conference. Dr. Marie Johnson, program director for the Institute for Engineering in Medicine and co-chairwoman for the conference, said having all the different parts of the medical device industry in the same building provides a great opportunity for the attendees to network. âÄúThe whole ecosystem is here, and it is a great place to concentrate on the amount of time you can spend with them,âÄù Johnson said. Dr. Paul Iaizzo, an associate director for the Institute for Engineering in Medicine, said the medical device âÄúecosystemâÄù can be created outside of its natural setting. âÄúIt is a neutral playing field where an academician and different companies can come together in a nonthreatening form,âÄù Iaizzo said. The conference inhabits the second floor of the Radisson University Hotel with booths mostly representing medical device companies from all over the United States. One booth is occupied by Surgical Technologies, which offers contractual support to medical device companies. Sherman Glavan, who is a sales technician at Surgical Technologies, said the conference allows his company to touch base with its clients. âÄúWe do a lot of our business locally, and [the conference] is in our own backyard,âÄù Glavan said. âÄúYou always want to be in touch with your customers.âÄù Also occupying a booth is Mike Selzer, a CEO-in-residence at the University Office for Technology Commercialization. With its presence, Selzer said the OTCâÄôs goal is to let the hundreds of medical device companies know the University has ideas it is willing to either license or transfer into commercial organizations like those present at the conference. âÄúWe just try to meet people and let them know what we are doing,âÄù Selzer said. âÄúUsually good things happen if there is a meeting of the minds.âÄù The four ballrooms on the second floor of the hotel are occupied with technical and scientific sessions ranging in topic from tissue engineering to health care reform pertaining to the medical device industry. Some of the presentations are scientific researchers out of the academic world, according to Durfee, who said these presentations shed light for companies on what may be happening with medical devices in the future. âÄúThe major players have to track it and see the glimmer in what could be 10 years from now,âÄù Durfee said. âÄúIt gives companies a chance to catch up on the research side.âÄù However, Durfee said the presentations vary greatly, and one prime example of this is the three-in-five competition. Johnson, who was the chairwoman of the competition, said a committee picks 10 projects that took pre-existing science and applied it to an overall need in the medical device industry. The contestants then presented their device to a panel of judges representing different parts of the industry. The presenters, who are both students and professionals, show three slides in a maximum time of five minutes. Afterward, they are asked questions for five more minutes. Johnson said the competition, which is in its second year, provides valuable feedback the presenters would not otherwise be able to receive. âÄúIt is important to hear from the people funding the projects, medical doctors and engineering folks to see if there really is commercial value,âÄù Johnson said. The graduate students participating in the conference come from around the world, and Durfee said it is the reputation of the area that contributes to its widespread popularity. âÄúMinnesota is known for medical technologies, and I think people around the world know that,âÄù Durfee said. âÄúYou see the conference is in Minneapolis, and you know that would be a great medical device conference to go to.âÄù Although the growing attendance forced the conference to spread to McNamara Alumni Center, Iaizzo said having the conference on campus allows people to see the value of the University. âÄúIt is essential for that,âÄù Iaizzo said. âÄúWe will expand and figure out new classrooms on campus, but we will not leave.âÄù The conference will end Thursday with tours of a number of the UniversityâÄôs labs.