Harry Potter and the rock band for hire

Massachussets duo Harry and the Potters will make you dance like a hippogriff. 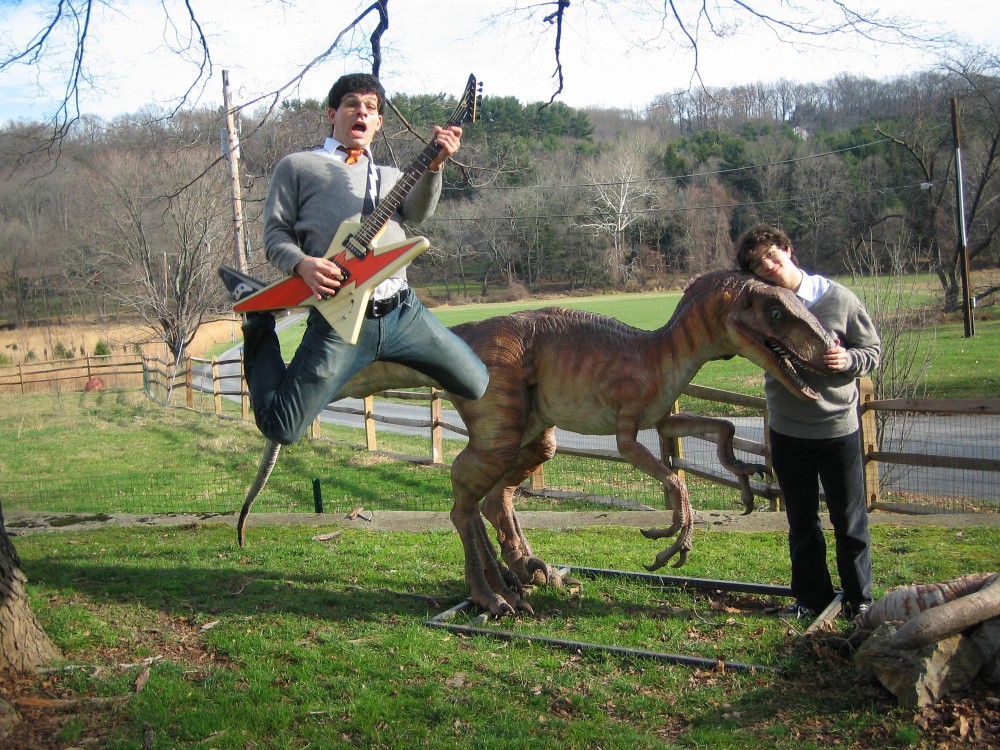 Paul (left) and Joe DeGeorge are clearly in violation of the canon with that dinosaur.

What: Harry and the Potters

The currency-sucking vacuum of J.K. RowlingâÄôs âÄúHarry PotterâÄù franchise has been powered by a laundry list of consumer merchandise âÄî much of which would appeal only to the neediest of children with the most impressionable of parents. From the not-quite-right vibrating Nimbus 2000 to booger-flavored jellybeans to âÄútroll glue,âÄù no canonical stone of the âÄúHarry PotterâÄù universe has been left unturned in the retail economy of the muggle world.

So even with this relentless capital drive, it is somewhat surprising that the most rewarding tangential creation surrounding this beloved book series has never netted Rowling or Warner Bros. a single cent or pence. In fact, East Coast punk act and wizard rock pioneers Harry and the Potters prefer to largely operate in the walls of a public forum. Since 2003, brothers Paul and Joe DeGeorge have been spreading rock, love and magic over one library audience at a time.

That is to say Harry Potter is spreading rock, love and magic over crowds of bookworms young and old alike. As is the case with any worthwhile fictitious fan project, this Massachusetts duo is not without its own unique mythology. In his seventh year at Hogwarts, Harry Potter harnessed the power of a time-turner in order to seek out his fourth-year self. Together, they formed a band with the goal of combating the evils of the wizarding world through the unparalleled power of rock âÄònâÄô roll.

âÄúIn the books, HarryâÄôs constantly employing the power of love as a means of combating Voldemort,âÄù Paul DeGeorge, the older of the two Harrys, said. âÄúWe love to play with the mythology as a means of explaining how our band conceptualized and also to play with the idea that heâÄôs using rock music as a weapon against evil.âÄù

With Paul on guitar and vocals and Joe on keys (both in traditional Gryffindor garb) the two Potters have played more than 500 shows since their backyard-shed beginnings. While the group does dabble in rock club territories on occasion, (theyâÄôll be playing at the Triple Rock in Minneapolis) the library setting has always been their preferred point of contact.

âÄúIt gives us a really cool forum to play our music to a really wide audience range, too,âÄù Paul said. âÄúParents are never going to say to their kids âÄòOh, you canâÄôt go down to the library.âÄôâÄù*****

While their six full-lengths all toe a punk rock line, there is a notable tenderness to the music. Their spastic aesthetic keeps every song just a little bit off tempo, which gives it all an appropriately endearing tone of youthfulness. Paul admits that Harry and the PottersâÄô greatest influence rises from the similarly playful âÄô90s rock group They Might Be Giants âÄî a group that seems wholly appropriate for the wizarding band paradigm.

âÄúThereâÄôs something about the way that [They Might Be Giants] writes music thatâÄôs accessible to a wide audience range,âÄù Paul said. âÄúItâÄôs also a band that enables you to grow up with them. There are a lot of really smart adult jokes in the music while still being accessible to kids.âÄù

While the upcoming July 15 release of the film seriesâÄô final installment may foreshadow a softened contemporary fervor towards the worldâÄôs favorite boy wizard, Paul and Joe DeGeorge have seen no signs of a muted interest on the road. Between the help of âÄúcool parentsâÄù and a great support relationship with an international roster of libraries, the group sees themselves slowing down before fizzling out. Not to mention their other magically-mused interest, the Harry Potter Alliance. The brothers assisted in founding the nonprofit organization in 2005. It focuses on engaging young adults in social issues through the themes of Harry Potter. Paul DeGeorge still serves on the board of directors.

âÄúItâÄôs a really interesting and unique approach to activism where youâÄôre able to re-contextualize global issues like fair trade and genocide into a language young people can understand like âÄòHarry Potter,âÄôâÄù**** Paul said.

While plenty of fictionally influenced subcultures may match âÄúHarry PotterâÄù in its vibrancy, the DeGeorge brothers help assert that RowlingâÄôs minions may be the most purposeful. Even with a billion-dollar film series, a massive mecca of a theme park and enough peripheral toys to overstuff a wizard stocking, Harry and the Potters seem to be the biggest success at actually bringing RowlingâÄôs books to life.