Headed into Frozen Four, Matson defined by his determination

Taylor Matson had never finished a season healthy before this year. 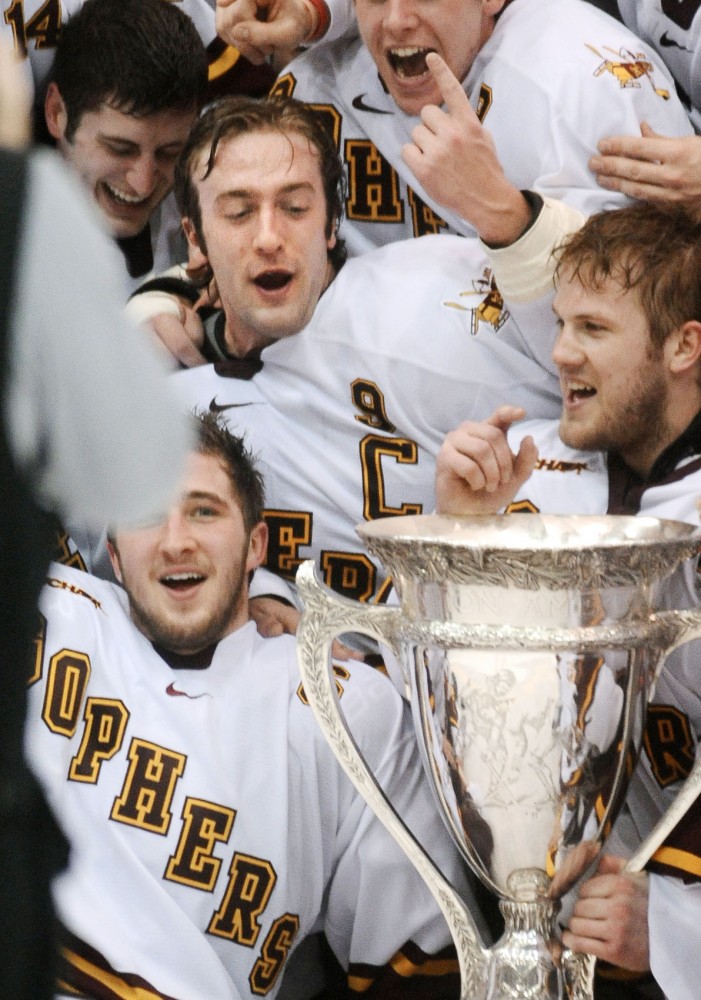 Taylor Matson has never had a beard this long before. He’s never been a part of a playoff run like this before, either.

In fact, until this season, the senior center had never finished a full year with the Gophers healthy.

Just last year, Matson was reduced to watching as his team lost two consecutive games to Alaska-Anchorage in the first-round of the WCHA playoffs.

He said watching the team lose was more painful than the minor ankle injury that kept him out.

Thursday, his Gophers team is the in the NCAA semifinals in Tampa, Fla., with a chance to advance to Saturday’s title game.

“It’s obviously been extremely frustrating,” Matson said Monday of his injury streak. “This year, one of the main goals was to stay healthy all season … and getting a chance to play in the Frozen Four — it doesn’t get much better than that.”

Matson said the team worked every day in the summer with the hope of reaching the stage they’re on now.

Although the Anchorage series served as motivation for the team this offseason, this year meant a little more for the senior class as a whole. Before this season, Matson and the rest of the senior class have missed the NCAA tournament.

“There’s been so much riding on this season, and as a senior class, we set our hopes so high … just because we’ve taken a lot of heat since we’ve been here for not accomplishing as much as we should have,” senior Nico Sacchetti said. “That was the biggest goal for us, and we’ve just got to keep going now.”

Matson has prided himself on outworking everyone on the ice in his career, and at the beginning of this season, he was rewarded for it.

He was chosen to captain the team in his final season with the Gophers — a dream come true, he said.

“It’s honestly everything to me,” Matson said. “I grew up watching the Gophers, and to see all the captains come through … and to be on that list with those guys is something I’m very proud of.”

Sacchetti said no one on the Gophers deserved the captaincy more than Matson.

“He’s wearing the ‘C’ because the last four years, there’s no question he’s been the hardest worker on our team,” Sacchetti said.

Matson leads with passion on and off the ice, and it’s infectious throughout the team.

He centers the third line but plays on the penalty kill and the power play, too.

His skill set isn’t elite, but he makes up for it in hustle, teammates say.

“His work ethic is unbelievable, and you can see that in the game,” freshman Seth Ambroz said. “He just doesn’t give up. He’s relentless … and so many people respect the hell out of him on this team.”

Ambroz said he has learned a lot from playing on Matson’s line, and he tries to model his game after the captain.

Nick Bjugstad, who leads the team with 25 goals this season, had the same reaction last year.

“He really was a mentor to me when I came in — I watched him work really hard and just kind of fed off him,” Bjugstad said. “He’s definitely a great leader … and everyone on the team looks up to him.”

In his final season, Matson set a career high in both assists (15) and points (23), but he said his main focus is on being a leader.

“I’ve always been kind of the guy that pushed people to their limit and motivated guys on the ice and been that positive guy when everything is maybe not as positive on the ice,” Matson said.

No quit in Matson

Matson snapped an 18-game goal-less streak in the final of the NCAA West Regional against North Dakota to propel his team to a 5-2 win and help earn a trip to the Frozen Four.

That cold streak ate at Matson as it ran its course.

“It was really frustrating … throughout the season, but to put one in against North Dakota — especially the game-winner — was awesome for our team.”

Regardless of this weekend’s result, Matson has already written his name in the Gophers’ record books.

Each year, everyone on the team participates in a drill called “four corners.” Players run up and down the stairs in each corner of Mariucci Arena while completing a lap around the concourse in between each repetition.

Matson finished the feat this season in 2 minutes, 10 seconds — shattering the previous record by 16 seconds.

“It took me like an hour to recover afterwards,” Matson said. “I’ve never actually pushed myself where I did the drill as hard as I could. It’s kind of nice to leave a record behind.”

“I don’t think his body knows how to quit,” Sacchetti said. “It’s just one of those things where he is so committed to working hard, and you just have to respect a guy like that.”

Whenever Matson talks about the Gophers, his passion for the program is clear.

He said the reason he came to Minnesota was to play for the Gophers and work to hang more banners in Mariucci’s rafters.

This season, Matson got to hang his first one after his team won the WCHA regular season title. Now at the Frozen Four and with the national championship in sight, he has a much bigger banner in mind.

“It really is hard not to think about it, but really, we’re trying to just focus on Boston College this weekend because they are the heavy favorite,” Matson said.

Whether Minnesota wins or loses against Boston College on Thursday, this weekend will be Matson’s last with the program.

“I’ve never been a part of a closer team,” Matson said. “[My college career] is going to end this week, and I’m just trying to enjoy every moment of it.”