Blake Cashman leads a revitalized defense to the win

The Gophers held the Boilermakers to just 10 points on Saturday. 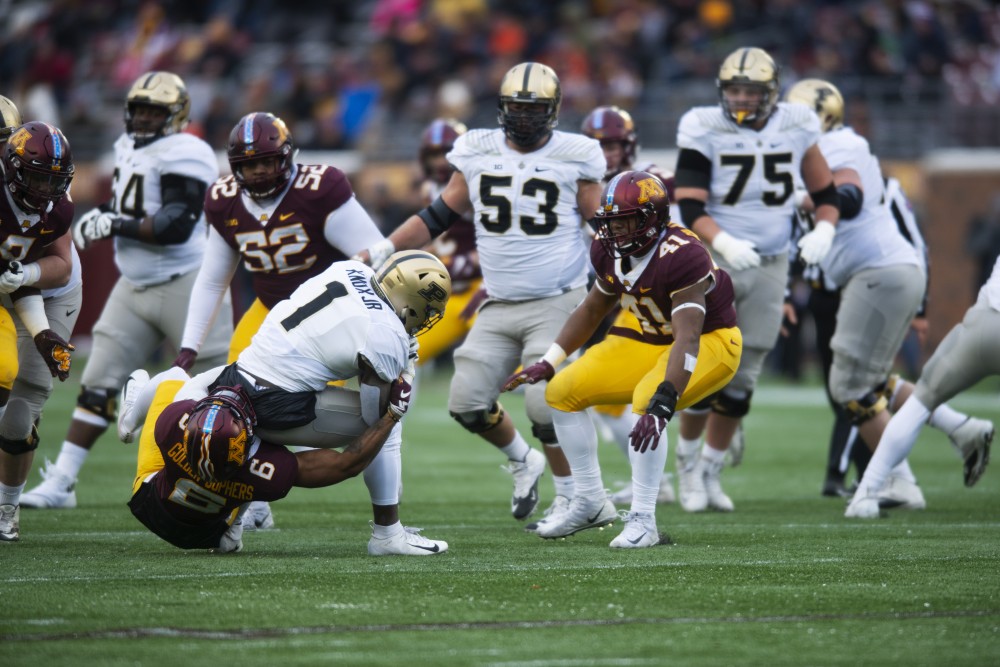 Defensive back Chris Williamson tackles Purdue during the game on Saturday, Nov. 10 at TCF Bank Stadium. The Gophers beat the Boilermakers 41-10.

What a difference a week can make.

Last week the Gophers gave up 646 yards and 55 points on defense against Illinois, allowing nine plays over 20 yards.This week against Purdue, who beat ranked opponents in two of the last three weeks, the Minnesota defense shut down the Boilermakers, giving up 233 yards and 10 points with the longest play from scrimmage only going for 17 yards.

The Boilermakers came into the game with the fourth best offense in the Big Ten but were unable to convert one third down the entire game, finishing 0-12.

“We didn’t change our defense … the defense works. But we got back to us,” said head coach P.J. Fleck. “What’s killed us in the past is explosive plays, I don’t think there were any explosive plays tonight — zero.”

The turnaround comes six days after the team fired defensive coordinator Robb Smith and replaced him with defensive line coach Joe Rossi. Rossi and Fleck hoped to instill a sound, simple and fast defense in the last three games of the year.

“This was a very emotional, draining week for a lot of us,” said Fleck regarding the coaching change. “I thought Joe Rossi called a tremendous game … I thought [he] handled [the coaching change] with a ton integrity, character and professionalism.”

The defensive energy came from senior linebacker Blake Cashman, who set the tone early on a critical fourth down play in the second quarter.

On fourth-and-one at its own 34-yard line down, Purdue lined up to go for it. The Boilermakers quarterback David Blough ran it to the right and Cashman burst through the line and tackled Blough for a loss, giving the Gophers optimal field position. The Gophers were able to get a field goal to extend the lead to 13-3.

“He’s on the cover of the game day program for a reason,” said Fleck.

Cashman rebounded quickly from last week finishing with a team-high nine tackles, 0.5 sacks and a forced fumble which he recovered and took 40 yards for a touchdown.

“It started with the guys up front … I just sat there for the quarterback and he came,” said Cashman. “He tried to stiff arm me and I hit his arm down and I saw there was an opportunity to go for the ball and so I seized that moment.”

The touchdown gave the Gophers the momentum to start the second half, extending the lead to 20-3, and that was all the team needed to finish off the Boilermakers.

Cashman is a semi-finalist for the Burlsworth Trophy, which honors the most outstanding football player in America who began his career as a walk-on. The senior has a team high 81 total tackles this season.

The Gophers rebounded from giving up 430 yards rushing to Illinois, giving up 88 yards on 30 carries.

“I thought we did a great job stopping the run. … I’m just really proud of our team’s response as a whole,” Fleck said.

The Gophers will look to show this performance wasn’t a fluke as they take on Big Ten West-leading Northwestern next week at TCF Bank Stadium with an opportunity to become bowl-eligible.

“We’ve seen that we can play at such a high level, but we also see we can lay a goose egg and get blown out by teams,” said Cashman. “It was a great win, they have a phenomenal offense, defense as well. We are gonna come in tomorrow and hit the reset button … and continue to prepare at a high level so we’re ready come Saturday for Northwestern.”