A workshop on Thursday night at the University of Minnesota demonstrated the importance of allies to the LGBT community. 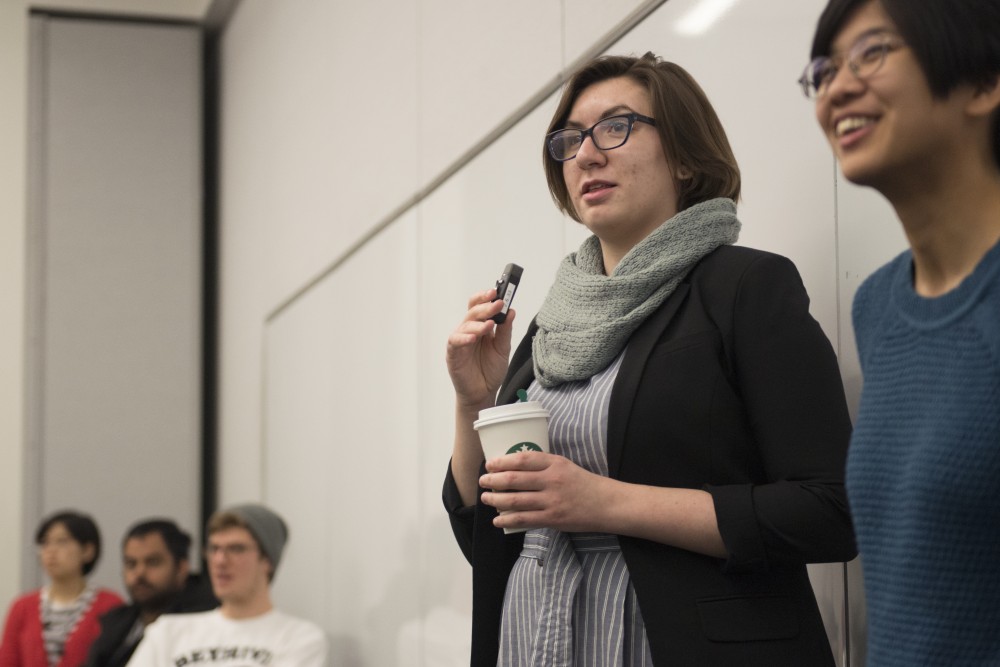 Jessica Schalz speaks about ways to be an LGBTQIA+ ally in CSE during during a workshop in Bruininks Hall on Thursday, March 8.

Through a workshop Thursday at the University of Minnesota, the LGBT community attempted to counter discrimination against less recognized genders and sexualities through reiterating the role allies can play in LGBT acceptance.

The workshop, called “Being an Ally,” was held at Bruininks Hall Thursday evening to discuss the importance of allies to the LGBT community, as well as ways allies can play a larger role in uplifting marginalized sexualities and genders.

The hour-long event was organized primarily by Women in Science and Engineering and Out in Science, Technology, Engineering, and Mathematics — two student groups focused on creating a more inclusive environment for LGBT students at the University.

Organizers and presenters at the event said that it is often difficult for students to express their true gender identities on campus, especially for those who are not cisgender.

Other students involved in organizing the event said STEM programs in universities across the country often fail to be inclusive in their messaging.

“A lot of other STEM-based universities will … not talk about the human side of their work,” said James Cox, a junior studying chemistry at the University who is the president of oSTEM. “That kind of just makes it a difficult environment for somebody who doesn’t follow the prototypical scientist stereotype of like white, cis, straight.”

Because of this, among other factors, members of the LGBT community are statistically underrepresented in STEM fields nationwide.

A 2015 study by Rice University sociologist Erin Cech shows that the makeup of LGBT workers in government STEM-related jobs is much lower than it should be.

Furthermore, LGBT students often consider leaving STEM fields due to discrimination. A 2016 report by the American Physical Society found that, among physicists, “over one-third of LGBT survey respondents ‘considered leaving their workplace or school in the past year’ after experiencing or observing harassment or discrimination.”

Organizers of the event hoped to reverse this trend by training student allies to respond to instances of homophobia and transphobia on campus, whether it be initiated by students, professors or teacher assistants.

“The goal for this workshop specifically is how to make sure that all of our communities are inclusive of each other,” Schalz said. “Having student groups acknowledging their peers as non-binary or queer is critical in being in classrooms with them.”

Katie Manderfeld, a junior studying computer engineering, was one of the presenters at the event and described the unique opportunity for allies to use their privilege to defend their fellow students.

“I hope people just think about either what they’re saying or what other people are saying,” she said.

One of the major themes of the presentation was how the power of privileged communities is something that can be used to amplify acceptance for the members of the LGBT community.

“I genuinely think allies are the most powerful people in any movement,” Schalz said. “Allies tend to have more privilege and more social power than the marginalized group itself.”