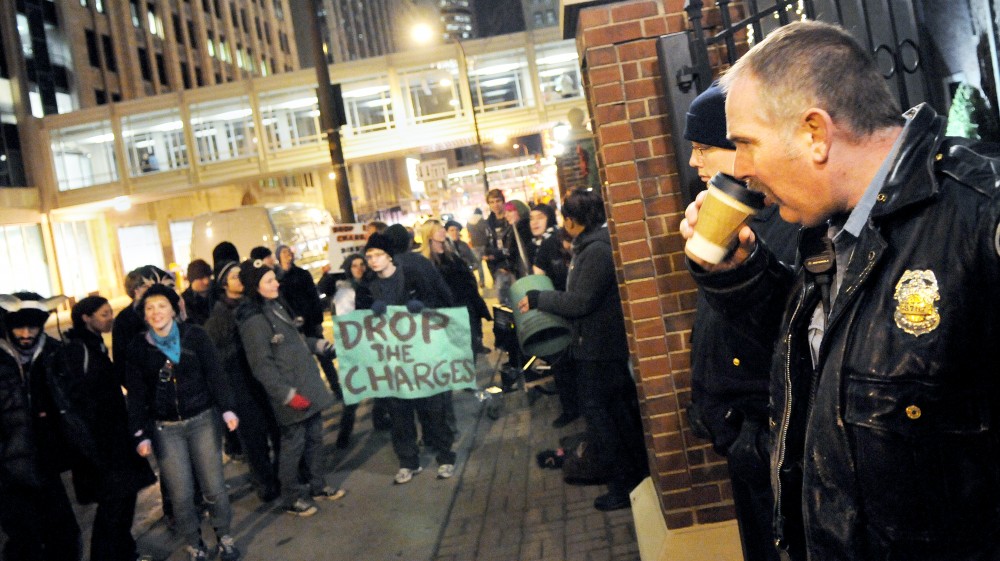 The RNC 8 and supporters protested Dec. 2 outside a fundraiser for DFL gubernatorial candidate Susan Gaertner, who is also Ramsey County Attorney and head of the office prosecuting them. Gaertner's office dropped terrorism-related charges for the eight activists Thursday.

When the Ramsey County AttorneyâÄôs Office announced late last week that it will drop terrorism charges âÄì but not other non-terrorism felony charges âÄì against the RNC 8, both the prosecutors and the accused felt like theyâÄôd made progress. Ramsey County Attorney Susan Gaertner said the step signified the best approach to serve justice against the eight activists, accused of plotting to violently disrupt SeptemberâÄôs Republican National Convention. The RNC 8 said the dropped terrorism counts signaled long-awaited relief after months spent pressuring GaertnerâÄôs office. But despite the dropped charges, first leveled in December under MinnesotaâÄôs version of the controversial PATRIOT Act, both sides still face a steep legal battle. The dropped terrorism charges have changed the game, to be sure, but in whose favor is yet unclear. In the cases against the RNC 8, the only certainty for both sides has been a historic outcome. However the charges end up âÄì falling away, going to trial, marring the criminal records of eight young activists âÄì will be momentous in the law enforcement and political organizing communities.

Political power play?
The RNC 8 each carry two felony charges for conspiracy to riot and damage property, which could bring significant prison time if convicted. Gaertner said sheâÄôs confident her office can prove the charges beyond a reasonable doubt. The prosecution team is burdened with proving that the activists, who after their preemptive arrests never actually made it to the RNC, intended violent interference, including kidnapping delegates and using explosives. The activists and their allies have vowed to redouble the political pressure on Gaertner, also a DFL candidate for governor, until she lets the remaining charges go. The two felonies still carry a possibility of several years in prison upon conviction. For the prosecution, the heat is off for filing charges against protesters based on an anti-terrorism statute passed in immediate reaction to 9/11. Supporters of the RNC 8 ridiculed the statute and the charges, and the suggestion that the eight activists could live the rest of their lives labeled as terrorists âÄì a powerful and troubling identifier in a post-9/11 world. The RNC 8 could face a new kind of difficulty gaining support for their cause, at least compared to before. The terrorism counts sounded harsh and excessive to some, allowing the RNC 8 to wrangle skeptics to their side. Without the terrorism counts, that support-generating distaste for the PATRIOT Act becomes substantially less relevant. Dismissing those charges, Gaertner said, was done to avoid distracting jurors who might be put off by the word âÄúterrorism.âÄù Gaertner acknowledged that while the statute covers the alleged actions of the RNC 8, such cases likely werenâÄôt its express purpose. Speculation swirled since GaertnerâÄôs office first tacked on the terrorism charges in December. Critics used the charges to bolster their argument that authorities had waged a war on dissent and political opposition. Back then, the RNC 8 called the trumped-up charges a political power play, claiming they would be something for the gubernatorial hopeful to tout. Now, the RNC 8 call the chargesâÄô dismissal a similar political move âÄì this time, a response to mounting political pressure put on by RNC 8 supporters and specifically DFL voters. âÄúOriginally they thought it made a much more glamorous prosecution,âÄù said Jordan Kushner , an attorney for RNC 8 member Luce Guillen-Givins . âÄúAt the end, it couldnâÄôt be politically justified, in part because it canâÄôt be legally justified.âÄù But Gaertner, who says sheâÄôs no stranger to critics who accuse her of playing politics, maintains that her aggressive prosecution of the RNC 8 is not only justified, but necessary. The activists still face years in prison if convicted. Sentencing is unaffected by the dropped charges, Gaertner said. âÄú[People say] either weâÄôre too soft on criminals, or weâÄôre too harsh on criminals,âÄù she said, âÄúbut we just have to shut out that background noise and make the decisions that we think are right.âÄù As for the claim that politics influenced the dismissal of terrorism charges, Gaertner said thatâÄôs not the case. âÄúIf the defendantsâÄô lawyers donâÄôt like this decision, I suspect itâÄôs because they realize itâÄôs good trial strategy that will help us achieve a successful result,âÄù she said. The tactical element isnâÄôt lost on RNC 8 member and University of Minnesota student Max Specktor . âÄúTheyâÄôre playing the game, theyâÄôre being more strategic with what theyâÄôre charging us with,âÄù he said. âÄúIt makes me think that the prosecutors are more serious about this now because theyâÄôre actually trying to make a case that isnâÄôt as ridiculous.âÄù
Disagreement about dissent?
Since their arrests more than seven months ago, the RNC 8 have claimed their surveillance, arrests, detainment and charges result from one thing: suppressing dissent. The RNC 8 say law enforcement agencies targeted them for their anarchist views and political organizing leading up to the RNC. TheyâÄôve consistently maintained that they never planned to hurt anyone or do anything illegal. Instead, they say, they had only been exercising their First Amendment rights to speech and assembly. Attorney Kushner said the pending felony charges are baseless and clear evidence of the governmentâÄôs criminalizing dissent. âÄúTheyâÄôre not based on anything that anyone did,âÄù he said. âÄúTheyâÄôre accused of conspiring to commit illegal acts and in reality theyâÄôre being prosecuted for their political organizing activities.âÄù In rallies outside GaertnerâÄôs campaign events and elsewhere, supporters of the RNC 8 have vilified officials they believe targeted them. And thereâÄôs a sense among the activists that the method worked. âÄúLook what happened in the last four or five months of us putting pressure on her,âÄù RNC 8 member Rob Czernik said, referring to the dropped charges. âÄúIt obviously had an affect.âÄù Until now, it was easy for the activists to highlight the shock value of the terrorism charges, which to the public could easily sound harsh and excessive. And the RNC 8 certainly capitalized on that. They have traveled across the country to speak on college campuses âÄîthey plan to visit more later this month âÄî and have been featured in the national media, including an appearance on MSNBC last week. But perhaps a bigger challenge lies ahead. âÄúWeâÄôve been defining the charges based on the terrorism enhancement and now thatâÄôs gone,âÄù Czernik said. âÄúHopefully people will realize theyâÄôre charging us with the same stuff, just with different language.âÄù Specktor said heâÄôs been trying to put a positive spin on things. Now, he said, the focus of the activistsâÄô outcry can shift from the use of terrorism charges to the core issue of stifling dissent. âÄúInstead of saying what we did wasnâÄôt terrorism, we can say what we did wasnâÄôt a crime either,âÄù Specktor said.
An uncertain upshot
The prosecutors now continue to prepare their case. The activists continue their push to drop the other charges and garner grassroots support. And even with last weekâÄôs significant dismissal of the terrorism charges, Czernik said the eight arenâÄôt getting ahead of themselves. âÄúItâÄôs too early to celebrate,âÄù he said. âÄúThis isnâÄôt the end game; this is just the opening salvos in a long, drawn-out chess match.âÄù