The area has seen an increase in Asian restaurants over the past years, garnering mixed reactions from owners. 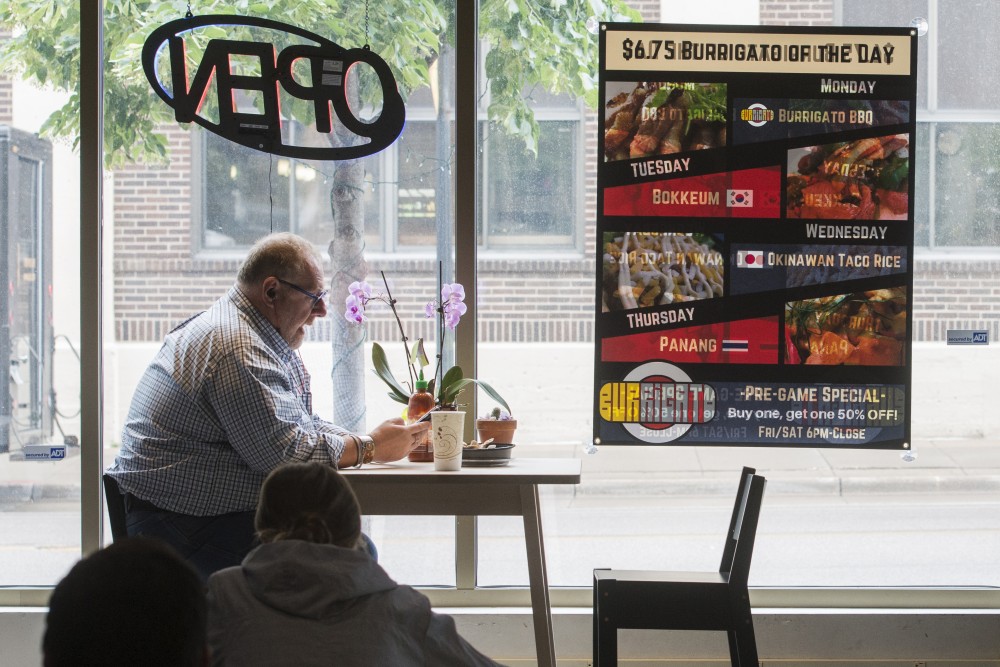 Customers eat at Burrigato on Tuesday, June 26. Burrigato opened in April 2017 and features a unique menu of Asian burritos.

Dinkytown is no stranger to change, and neither are the palates of its customers.

The area has experienced a gradual proliferation of Asian restaurants over the past few years, leading to heightened competition between businesses serving similar cuisine. Many restaurants have noticed the increase, but some owners feel that their brand of food is unique enough to distinguish them from the crowd.

Kiet Phan, co-owner of Vietnamese-Chinese Camdi Restaurant, said the rise has brought more customers to the area, but lately the store has seen less lunchtime activity. Not all of the competition comes from similar businesses. Phan is concerned the food court in the recently-renovated Athletes Village will eat into that lunch rush.

While Camdi is one of Dinkytown’s oldest Asian restaurants, the new faces in town have also adjusted to the changing landscape.

Asian fusion restaurant Burrigato opened April 2017. When co-owners Korra Ektanitphong and Daniel Ringgenberg were looking for a space, Ektanitphong said they chose Dinkytown because there was less direct competition. She was surprised at how quickly the restaurant demographic shifted after Burrigato’s opening.

“When I went to the U, you [didn’t] think of Dinkytown when you want Asian food,” she said.

Ektanitphong said all the restaurants are feeling the effects of “over-saturation,” especially with the addition of Raising Cane’s Chicken Fingers to Dinkytown. Burrigato’s plan to combat this involves an emphasis on store-to-door delivery and a more universal rebranding so customers unfamiliar with Asian foods can find the menu accessible.

Just on the other side of Dinkytown is K-Bop. Although K-Bop specializes in Korean cuisine, owner Eric Nakamoto said he isn’t worried about Bonchon’s arrival.

Nakamoto and other owners noted that summer seasons are typically slow while students are away. But K-Bop sees an increase in business every summer, he said.

The two hot pot destinations in the area model a case of direct competition. LePot and Tasty Pot both offer hot pot, a Chinese dish with simmering broth and various ingredients.

Lepot owner and recent University graduate Zhongshuang Su said he wasn’t surprised by the influx of other Asian restaurants, adding businesses like K-Bop and The Cove encouraged him to open his restaurant in Dinkytown in May 2017. While he said the competition draws more people to the area, he did not anticipate another hot pot restaurant to open nearby at around the same time.

“If you have more restaurants, you will have more customers,” said Su. What the competition is serving doesn’t matter, as long as his restaurant’s food is good, he added.

While fast-casual Asian fare has picked up steam nationally, what’s happening in Dinkytown may just be a coincidence, said Randal Gast, president of Dinkytown Business Alliance. The rise in number of restaurants in Dinkytown brings sustainability into question, he said.

“Is the market big enough? That is the challenge,” said Gast.