The veteran quarterback has a total of six touchdowns so far. 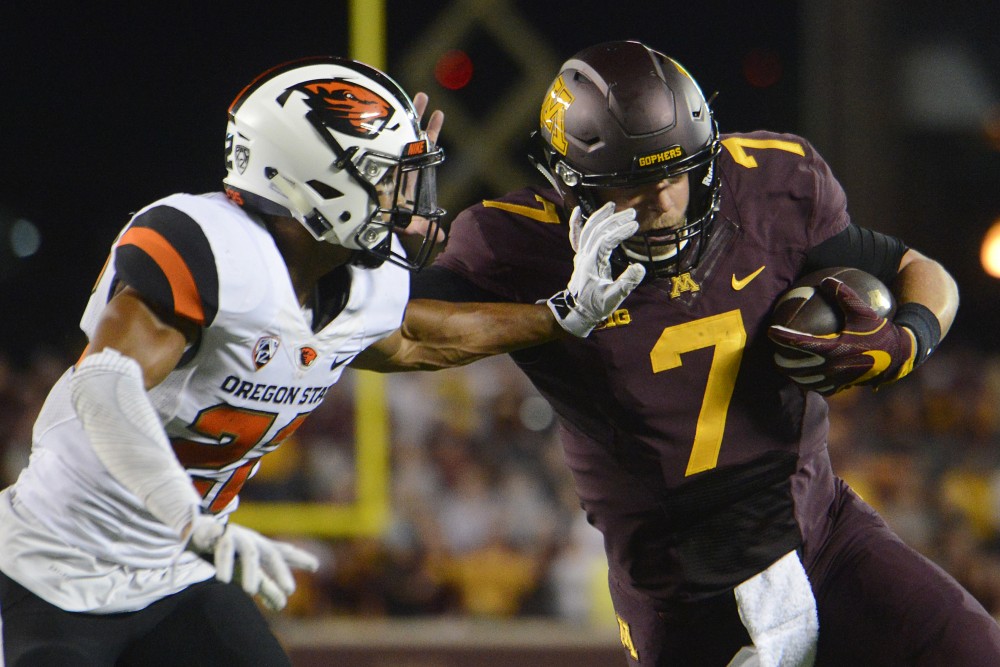 Redshirt senior Mitch Leidner has drawn plenty of criticism over his four-year career for the Gophers.

The veteran quarterback has silenced critics through the first two games of the season, racking up six total touchdowns with zero turnovers so far against non-conference opponents.

Leidner failed to throw more than two touchdown passes in every game last season. He completed four touchdown passes last game against Indiana State, along with a 193.27 quarterback rating in the Gophers’ victory over the Sycamores.

Leidner’s improvement has shown against non-conference foes. He threw two interceptions and only 184 yards against Kent State in 2015. Leidner has yet to turn the ball over this season.

The Gophers added offensive coordinator Jay Johnson to the staff after the 2015 season. Johnson said that Leidner has already had improvement between weeks one and two.

“I think just being in that game-day routine and the influence that you have on game day,” Johnson said. “I thought he saw the field much better and put our offense in position to have positives.”

Leidner said he contributes part of his success to Johnson’s new style of offense, as Johnson doesn’t have the offense learning entirely new plays every week.

“When we start watching film, I already know what our offense is going to be, so I can watch film on that day and just get ahead and look at different formations and that kind of thing,” he said. “Before, if I [watched] film on Sunday, we might be getting a whole new offense on Tuesday, so [it was] kind of pointless because I [didn’t] know what we’re going to run.”

The redshirt senior has excelled at finding different receivers to target.

“I’m seeing a different [Leidner] off the field, on the field as well,” Wolitarsky said. “The work this guy has put in is amazing and is definitely something I look up to.”

Conference play will be a big test of Leidner’s skills.

The Gophers struggled in the Big Ten last year and lost five of their last six conference games. Leidner threw six interceptions and only seven touchdown passes through that stretch. Minnesota’s conference struggles led to a regular season losing record.

But Leidner’s promising start gives the team some hope.

“[He’s] more of a leader. It’s something where we are peers. I’ve got to do good to make him look good. He’s got to do good to make me look good,” said sophomore center Tyler Moore. “It’s one of those things where he just wants to push you, and he wants you to get better, and he wants to do these things. It’s the right thing, and he’s got a great head on his shoulders. I really like where he’s going.”