Gophers feeling energized as Payton returns to the floor 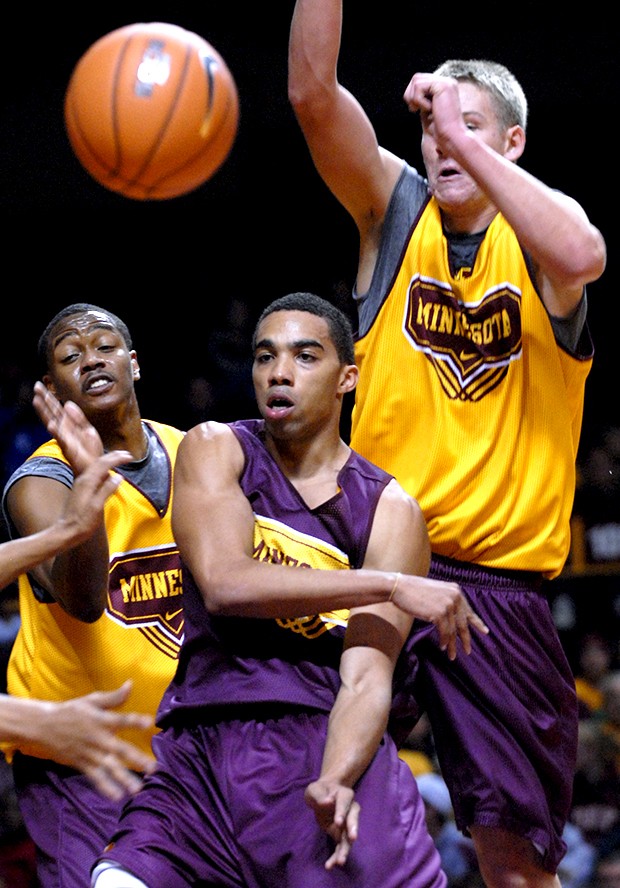 Tubby Tip-off at the Barn

According to coach Tubby Smith, Kevin Payton âÄúnever shuts up.âÄù Not that itâÄôs a bad thing. The junior guard isnâÄôt one of MinnesotaâÄôs top contributors, but he is a vocal leader on a team that doesnâÄôt have many of them. After a six-game suspension for academic reasons, the team is glad to have him back. âÄúGuys are going harder in practice, and it seems like a completely different team with him here,âÄù junior Damian Johnson said. âÄúHe just brings a lot of energy to this team and helps guys sustain his focus.âÄù Payton played in the final minute in a win against Northwestern on Sunday, and will travel with the team for their game at Illinois tonight, at 6 p.m., broadcast on the Big Ten Network. The game has serious implications on the GophersâÄô NCAA tournament chances. With three games left, they are in a four-way tie for fourth place with Ohio State, Penn State and Wisconsin. Penn State beat them on ValentineâÄôs Day and the Gophers play Wisconsin on March 4. Which means itâÄôs a good time for Payton to be back. After SundayâÄôs game, Smith said that Payton filled a vocal leadership void on the team, saying, âÄúTrying to get Al [Nolen] or Westbrook to say something? TheyâÄôre mummified most of the time. We have to find a way to pry their mouths open most of the time.âÄù âÄúHeâÄôs been helpful in that area,âÄù Smith said Wednesday. âÄúHeâÄôs always talking and communicating the right things to the guys. ItâÄôs one thing to talk, but you have to be able to say the right things.âÄù Smith announced PaytonâÄôs suspension Jan. 21, and the junior didnâÄôt practice or play with the team until the week leading up to the Northwestern game. In the final minute, with the Gophers holding more than a 20-point lead and after every other player had been in the game, the crowd began chanting for Payton. When Smith put him in, Payton took several passes from teammates but opted not to shoot. âÄúItâÄôs always good to get back with the team,âÄù Payton said. âÄúI missed these guys a lot. I felt really isolated without them, so it was a lot of fun being back. The time away helped me out mentally.âÄù Payton played in all of the teamâÄôs 31 games as a freshman under Dan Monson, but lost much of his playing time when current point guard Al Nolen joined the team last season. That was also SmithâÄôs first season with the Gophers, and he has developed an affinity for Nolen and has started him in all 26 games. Payton has played less than four minutes per game this year and hasnâÄôt scored. But, as Gophers players indicated Wednesday, scoring isnâÄôt everything. âÄúHe just brings energy and passion to the team,âÄù Westbrook said. âÄúWhenever I come out of the game he always has a word of advice. Him being back has helped me a great deal, personally.âÄù