Eighty-one Minnesota teams competed in the event this weekend. 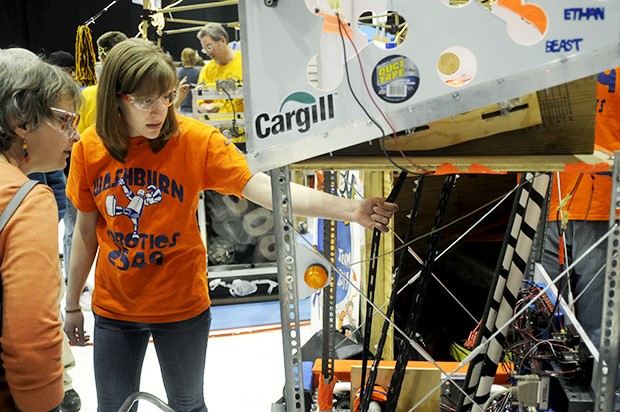 About 2,000 high school students put their technical and teamwork skills to the test this weekend with robotics competitions at Williams and Mariucci arenas. University of Minnesota engineering students mentored one Minneapolis team from Washburn High School that was among the winners and will travel to Atlanta to compete nationally mid-April. The 102 competing teams were tasked with building a robot specifically for a game thatâÄôs newly designed each year by the nonprofit FIRST (For Inspiration and Recognition of Science and Technology). Though this marks the 18th year since FIRST began the program, itâÄôs only the second regional competition held in Minnesota. Last yearâÄôs Minnesota contest at Williams Arena hosted 54 teams, 16 from out of state. With an additional venue this year, nearly double âÄî including 81 Minnesotan teams âÄî tested their machines on campus, said Mark Lawrence , who chairs the stateâÄôs FIRST regional planning committee. The number of Minnesota FIRST teams competing throughout the country has dramatically increased since 2005 when only one competed. One of the teams competing in Mariucci for the first time was the Washburn Millerbots. Last year, Cargill approached the school looking to sponsor an urban team, said Washburn engineering teacher Sara Etzel , so she and physics teacher Peter Grul started one. It was exhausting, Etzel recalled, as the two had been the teamâÄôs only mentors. But this year several University students from Theta Tau , a co-ed professional engineering fraternity, helped guide the team as they designed and built their robot.

Mechanizing ideas
Aerospace engineering sophomore Josh Imobersteg met Etzel at an outreach event for high school students earlier in the year and wanted to help out. When the six-week robot building season began in early January, he and several other fraternity members started going to weekly work sessions to brainstorm and build, along the way showing students things like programming and power tool use. Building the nearly 5-foot-tall, 120-pound contraption, which could move autonomously or via remote control, pick balls up off the ground using a conveyor belt and deposit them by opening a remotely controlled hopper door, wasnâÄôt trivial. The kit of parts that came with each teamâÄôs $6,000 regional competition entry fee did not come with assembly directions, and the team had to scrounge the hardware store to supplement it. Though theyâÄôre allowed to spend up to $3,500 on additional parts, Etzel said the Millerbots only spent an extra $900, preferring instead to spend the sponsorship money provided this year by Cargill and a NASA grant on entry fees and the teamâÄôs travel costs. So far, theyâÄôd already spent $10,000 just to enter two regional contests, and between travel and entry fees, a trip to nationals will take about $12,000 more. Washburn junior Ambre Salokar worked on the bumper, which consisted of plywood, a pool noodle and cloth. She said working with their University mentors had been fun. âÄúTheyâÄôre not so serious, theyâÄôre OK with everything,âÄù she said. She added that, perhaps most importantly, âÄúthey let us do the work.âÄù Lending their engineering background without taking over the project was the main goal, Imobersteg said. It was a challenge at times, he said, but he found it was effective to ask the team why they were proposing a certain design. âÄúThat actually made them stop and think a lot,âÄù he said. The best part for Imobersteg was seeing the team take an idea and turn it into something that actually worked. âÄúWho cares if we win, who cares if we lose, we did something cool, we made it work,âÄù he said.
On to Atlanta
But winning didnâÄôt seem quite so unimportant Saturday afternoon as the Millerbots advanced through the final rounds. The weekend consisted of a series of two-minute matches between two alliances, each made up of three randomly selected teams, in which robots on the field and human âÄúshootersâÄù on the edge got points for depositing âÄúorbit ballsâÄù into trailers hitched to the opposing teamsâÄô robots. On Saturday afternoon, after a day and a half of matches, the top eight teams each chose two other teams to complete their alliances and competed in a series of final rounds. While the Millerbots werenâÄôt in the top eight, a team from Florida had noticed they worked well with others and chose them along with a Wisconsin team. Despite a tense couple minutes after a quarterfinal- round collision, during which Etzel, Grul and the team worked frantically to fix knocked-loose wire and dislodged conveyor-belt axle, the alliance was successful. After six final round matches, the competition floor erupted when the three teams realized theyâÄôd won the contest. Saturday evening, as they crated up their robot to be sent to Atlanta where theyâÄôll compete with it in less than two weeks, Etzel said she was exhilarated. At the end of several days of competition and the âÄúhundreds and hundreds of hours we put in,âÄù this weekendâÄôs contest âÄúmakes it all worthwhile.âÄù