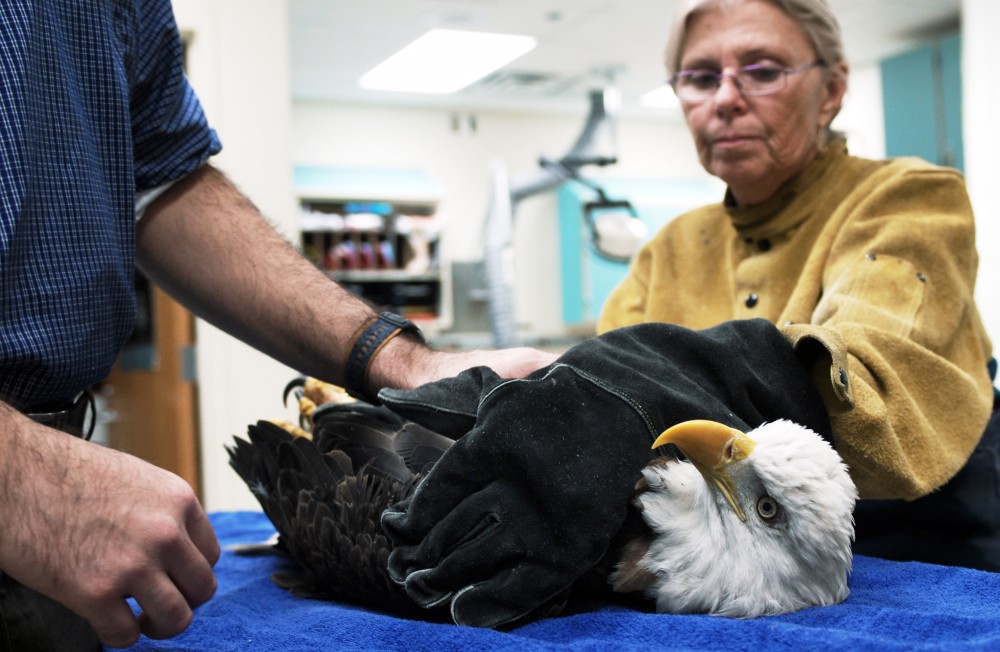 With Minnesota deer hunting season in full swing, a University of Minnesota group is working to persuade hunters to reconsider their choice in ammunition. Co-founder of the UniversityâÄôs Raptor Center Pat Redig is in the process of organizing an interdisciplinary group to do statewide surveys asking hunters what it would take to get them to switch from lead bullets to copper, which are more expensive, but less toxic. Lead is toxic to bald eagles and humans, and there has been a whirlwind of controversy about whether people can be harmed by eating a deer that was shot with a lead bullet. Food pantries across the state even temporarily pulled venison that was donated by hunters off their shelves from fear of lead poisoning. Redig, a well-known researcher in the raptor lead-poisoning field, started the Raptor Center in 1974. Since then, every bald eagle that receives clinical treatment is monitored for lead. After the fall deer hunting season, eagles typically have much higher concentrations of lead in their blood, because they eat the remains of deer that hunters leave behind, Raptor Center veterinary resident Luis Cruz-Martinez said. It only takes about 30 milligrams âÄî an average Tylenol tablet is 250 milligrams âÄî of lead to kill a bald eagle, but even smaller amounts of lead can cause harm to respiratory or neurological processes, Cruz-Martinez said. âÄúMost of the birds that we see here are unable to stand, they are unable to fly and they are gasping for air,âÄù he said. There were studies done this summer by the Minnesota Department of Natural Resources that showed lead bullets break into many fragments that spread throughout an animal on impact. Cruz-Martinez said when consumed, these fragments could contain enough lead to cause harm to pregnant women and children. But Erik Zabel, an Epidemiologist with the Minnesota Department of Health, said there has never been conclusive evidence of someone getting lead poisoning from eating venison. While itâÄôs unlikely someone would show symptoms from consuming very small traces of lead, it could cause subtle effects on brain development, especially in children younger than 6 years old, Zabel said. There needs to be more monitoring to see if adults can be negatively affected from eating venison that contains traces of lead, Zabel said. Cruz-Martinez said this isnâÄôt an attack on hunters, but rather a chance to work with them. âÄúWeâÄôre not against hunters,âÄù Cruz-Martinez said. âÄúMany of us who are working on this are hunters.âÄù Redig said he has gone on hunting trips in the past and the anti-hunting claims some of his critics have made are untrue. University applied economics professor Jay Coggins is also a hunter and is working with the Raptor Center on the project. Coggins is trying to figure out just how much more expensive it will be for hunters to use copper bullets, and if they are willing to pay that price in a struggling economy. Coggins said he expects that his group will meet some resistance, based on history. When lead shells were banned for waterfowl hunters in the 1990s, there were a lot of skeptical hunters, he said. âÄúHunters are a very tradition-minded group,âÄù he said. âÄúThey typically donâÄôt like to see change.âÄù