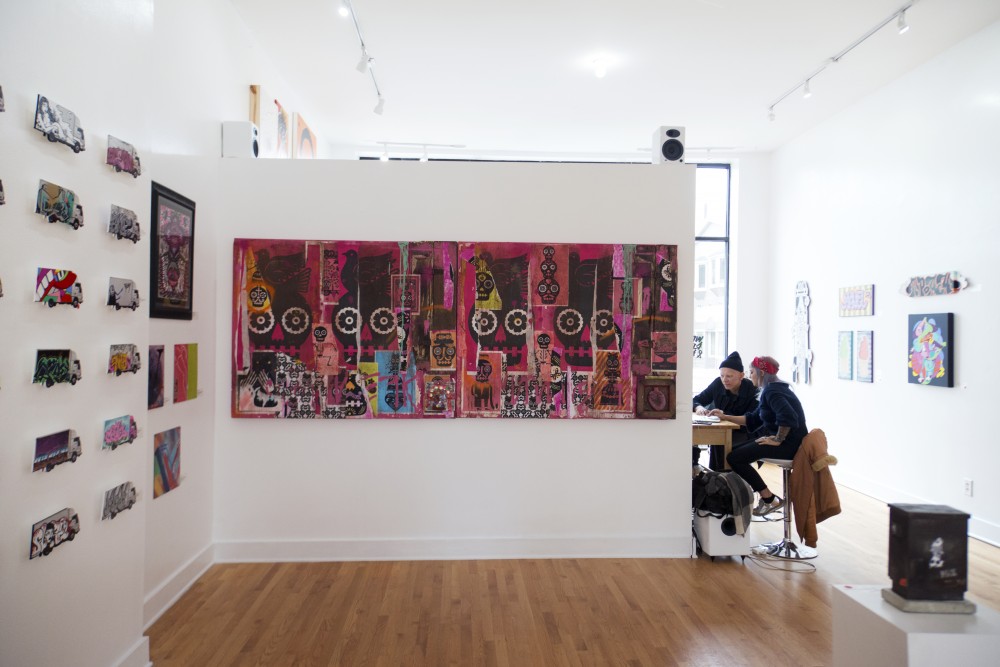 One person’s art is another’s vandalism. But in Minneapolis, times are changing.

Opened on Sept. 15, “Writers, Rebels, & Rejects” features graffiti and street art in a setting where it’s seldom seen: a gallery.

Hosting the work of many local, out-of-state and even international artists, Gamut Gallery is displaying pieces traditionally thought of as public blemishes to paint a new idea of “art.”

“Just because it’s street art doesn’t mean it’s vandalism. But not just corporate sponsors deserve the right to our eyes,” said Cassie Garner, Gamut’s gallery director and exhibit curator. “Bringing them into a gallery helps people see that these people are artists, they are doing legit things, you just don’t see it if you’re just looking at monikers on an electrical box.”

Gone are the days of pompous events and musty conversation.

Started by 12 friends in a basement, Gamut has grown into a beautifully creative space. With vibrant and unique art hanging wall to wall — blended with a patio accented with French-cafe style lighting hanging over-head. Garner says this is the potential future of art galleries. With purchases ranging from $3 to $3,000, Gamut’s mission is to support the new-age art collector — the one whose display case may be a college dorm room, and not a mausoleum-esque study with dusty carpets.

“Writers, Rebels & Rejects” is cemented around Minneapolis streets. The East Coast has water towers, the West is huge on toy train shows. Minnesota?

“I was sitting here stirring my gears and it hit me: white box trucks. They’re all over Minneapolis,” Garner said. “It’s actually super dope and has never been done before.”

Dope it is. Hanging on the wall, looking like a convoy out of a “design-your-own-racer” video game, each artist has a 5-foot-12-inch truck that they painted on show.

Also on display are miniature electrical boxes that replicate those sitting on the side of railroad tracks, which truly speaks to the writer culture.

“I love old rusty metal objects and I love the layers of information that walls and utility boxes have on their surfaces in their layers of graffiti, posters and buff,” artist Biafra said. “The utility box sculpture felt like the perfect opportunity to combine all of those interests.”

As a long-time legend in the Minneapolis scene, Biafra is noticing changes in local art culture as well.

“The crowd for graffiti shows used to be pretty much just other graffiti writers and their friends,” Biafra said. “Now, more and more people are interested in it. Sometimes it’s people I would never suspect, which is always fun. It still catches me off guard.”

“I’m always inspired by the gift of life,” Daze said. “I want to create something beautiful every day I live.”

It’s these types of artists that turn an exhibit like “Writers, Rebels & Rejects” into more than an art showing. Moniker after moniker, bottle shake after bottle shake, expressiveness is slowly painting itself onto the city one tag at a time.

Gamut will be hosting a finale of the exhibit on Oct. 13, featuring live writing by Black Daze, DJ-ing and good vibes for one and all. Hurry in, though, as Gamut won’t be hosting an exhibit like this one for many-a-moon.

“You won’t come to another exhibit like this for over a year here,” Garner said. “We like to keep it fresh and interesting, because it’s easy to get bored.”