Women improve to 13-1 with victory 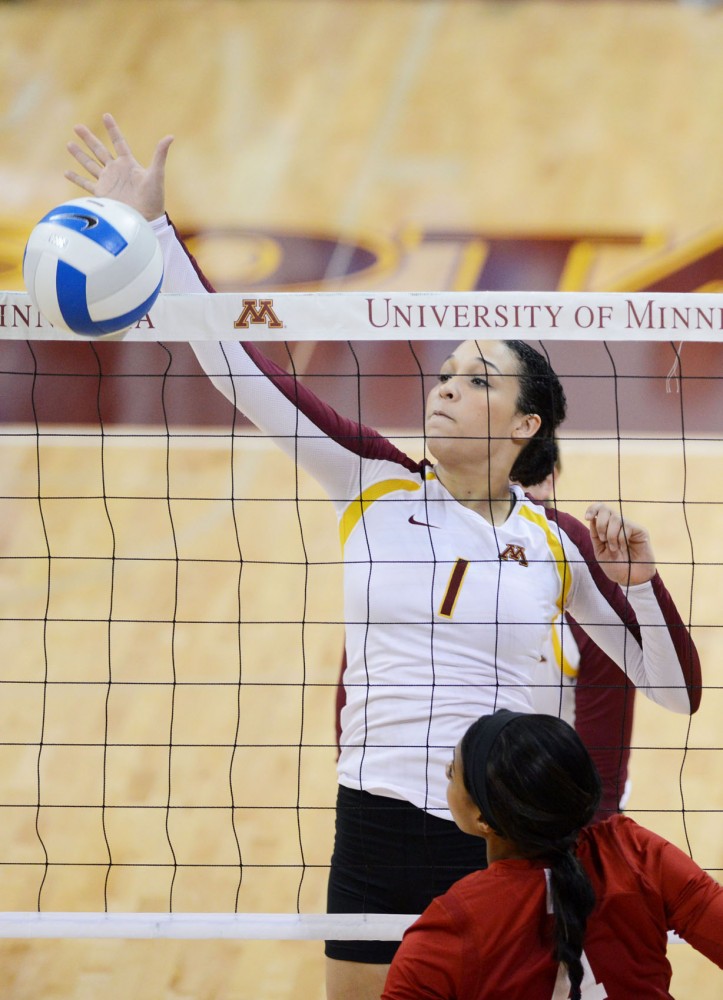 Outside hitter Daly Santana blocks the ball Wednesday night against Indiana at the Sports Pavilion.

The Gophers beat Indiana in straight sets in their Big Ten opener at the Sports Pavilion on Wednesday night.

Not that there was really ever any doubt.

Minnesota is No. 9 in the nation and was tabbed to finish second in the conference this year, while Indiana is unranked and was not picked to end in the Big Ten’s top six this season.

Minnesota head coach Hugh McCutcheon said his team was good but not perfect and had a few problems such as service errors.

“The only issue I had with the way we played was toward the back end of that third set,” McCutcheon said. “We made a few unforced errors that I thought were uncharacteristic of us tonight.”

Though the Gophers made a total of eight service errors — half coming in the third set —sophomore outside hitter Daly Santana’s jump-spin serving game was on point. She totaled all of her team’s five aces on the night, three of which came during a nine-serve breakaway in the second set.

“That’s the Daly we expect,” McCutcheon said. “Not necessarily however many aces she has … just the fact that she was able to get back there, really assert herself from the service line and give ourselves a chance to score some points.”

Santana said she didn’t let the pressure of her long service run get to her.

“All of us have been working on a lot of things in practice,” Santana said, “so I just went back there and said, ‘Do what you do in practice.’ And I feel like we all did.”

McCutcheon said his middle blockers senior Tori Dixon and freshman Hannah Tapp have invested a lot of time into the defensive system, but he said Santana and Wittman made the extra effort to combat the Hoosiers’ right side.

Wittman said the chemistry between the Gophers’ hitters was palpable.

“We have plenty of hitters on the court, on the bench, that can help us at out any time,” Wittman said. “That makes our offense really scary to go up against because at any point, someone can hit from the front row and the back row.”

Minnesota improved to 13-1 overall. The Gophers will next play Purdue at home on Sunday.