Minnesota bounced back after it lost the first meet of its season a week ago. 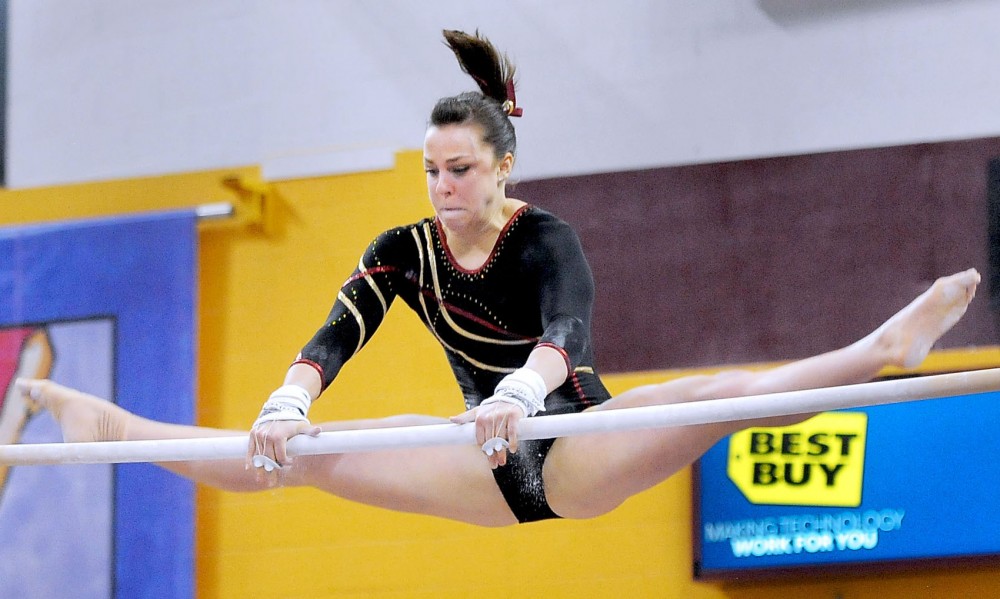 Senior Kayla Slechta competes on bars, March 9, 2013 in a quad meet at the Sports Pavilion.

Minnesota’s women’s gymnastics team responded after a less-than-stellar performance against Nebraska last weekend with a 196.025-195.9 win over Ohio State this weekend.

“We felt good going in, and I think that’s the most important thing,” head coach Meg Stephenson said. “But the kinds of corrections we want to make are going to take more than just two practices.”

With back-to-back road meets, the Gophers’ practice time has been limited.

Still, the Gophers looked unaffected by their brief preparation this week.

“We like the short weeks because we’re in that competition mode all the time,” she said. “So we just want to get back in there.”

This isn’t the first time Minnesota’s dealt with back-to-back away meets this year. The Gophers traveled from Washington to New Hampshire to Minnesota within a week earlier this season.

Slechta said the previous experience with travel helped this time around.

The Shakopee native led the Gophers with quality scores on floor exercise, vault and the uneven bars — all above a 9.8.

“I had some goals … on how I wanted to perform my gymnastics,” Slechta said. “So I was feeling really good [out there].”

Her bars routine helped start Minnesota on the right foot.

Still, the Buckeyes jumped ahead 98.15-97.85 in the middle of the meet before senior Justine Cherwink provided the team with a spark on floor exercise.

“I think one of the highlights of tonight is that we had Justine Cherwink start us off on floor,” Stephenson said. “And she just did a great routine with a 9.85.”

Gophers junior Kylie Schermann and sophomore Lindsay Mable also had great routines this weekend. Schermann scored a 9.875 on floor exercise, while Mable earned a 9.9 on vault.

With Zach Liebler out with an illness and Matt Frey limited after hyperextending both knees, the Gophers entered the contest against Air Force a little shorthanded.

It didn’t seem to faze the team, though, as Minnesota bested the Falcons 434.2-431.55. It was the Gophers’ second-highest score of the season.

“It wasn’t the most awesome meet we’ve ever had, but we were good enough to win,” head coach Mike Burns said. “We were definitely dealing with some adversity, so it was nice to see them be able to put it all together.”

While Matt Frey was limited with an injury, he had the highlight performance of the night, hitting a personal best, 15.4, on the parallel bars.

“He went out and did the most amazing set he’s ever done,” Burns said. “When Matt hit that routine, holy smokes. We went nuts. We were jumping around like a bunch of mad men.”

Gophers junior Ellis Mannon provided another lift for Minnesota with a win in the all-around competition.

The meet Saturday night opened a monthlong road trip for Minnesota. Burns said he thought the meet was a good starting point.

“It was definitely a hard-fought battle and a good victory,” he said.