The Gophers set a new record Sunday with 1,383 fans in attendance at home. 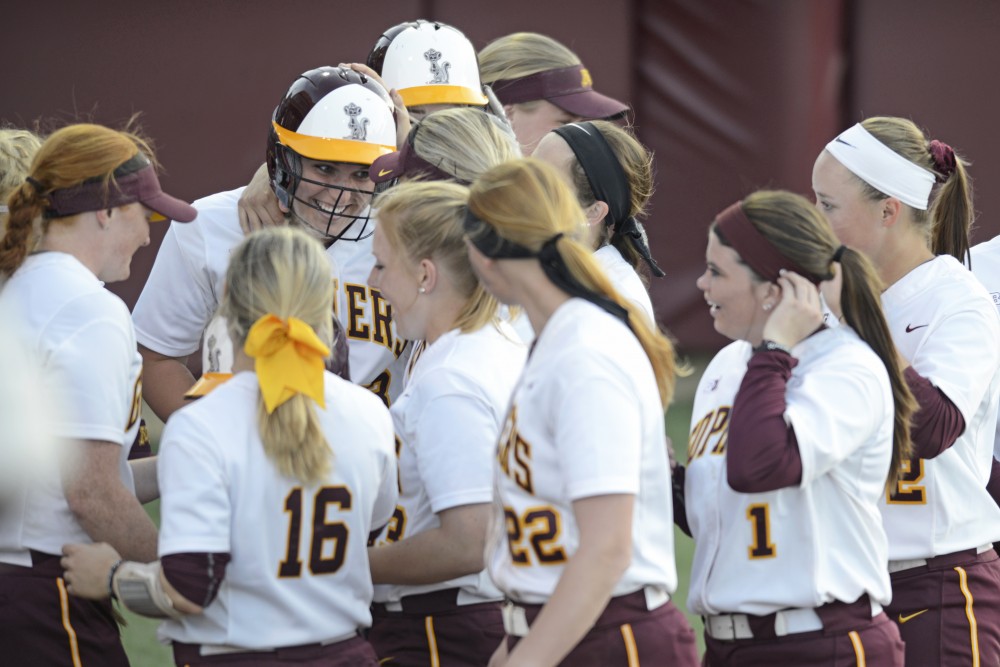 The Gophers congratulate Freshman catcher Kendyl Lindaman after she hits a home run on Friday, April 21, 2017 at Jane Sage Cowles Stadium. The Gophers won 5-0 against the Iowa Hawkeyes.

Three wins over the weekend culminated in a record-breaking home crowd for the Minnesota softball team.

“Today’s crowd was unbelievable,” head coach Jessica Allister said. “We are fortunate to have who I think are the best fans in the country.”

The series finale turned into a pitcher’s duel with neither team able to get much offense going early on.

Senior Sara Groenewegen paced the Gophers in the circle and took a no-hit bid into the sixth inning. Groenewegen now boasts a record of 22-2 along with a 0.52 ERA and 203 strikeouts.

“I do have an added little bit of motivation just knowing I’m no-hitting a team into the sixth inning,” Groenewegen said. “I’m going to try anything it takes because obviously a no-hitter is a pretty big deal, but I’m happy with a win at the same time.”

The Gophers were able to get on the board in the bottom of the third when, after third baseman Danielle Parlich reached on a single, right fielder Maddie Houlihan hit a sinking liner to left that bounced past a diving Cheyenne Pratt and rolled all the way to the wall.

Houlihan was able to round the bases for an inside-the-park home run, which gave Minnesota a 2-0 lead.

“I was just looking to make an adjustment from my first at-bat,” Houlihan said. “Once I was rounding second and I saw [the ball] was still at the wall, I knew there was a chance I could get home. It was exciting to be greeted by my teammates.”

Houlihan would score Parlich once again with a fifth inning single, which provided an extra cushion heading into the final two frames.

But the cushion wasn’t needed.

Groenewegen — with a bit of help from her defense — shut down the Hawkeyes for a complete-game shutout, her 15th full outing of the season.

Friday’s game contained a major milestone for a Gophers freshman.

As if the display of power as a freshman wasn’t enough, Lindaman tied the record with eight games left in the regular season.

“I think it’s pretty cool to see how easy [Lindaman’s] transition has been from high school ball to here,” said Groenewegen. “She’s done a tremendous job, and I’m really proud of her.”

Saturday’s tilt was more one-sided as the Gophers won 9-1 in their shortest game of the season at one hour and ten minutes.

Minnesota jumped to an early lead with a three-run first inning and didn’t look back. The Gophers scored in each inning, highlighted by home runs from Houlihan and Dani Wagner.

Freshman Amber Fiser earned the win in the circle in four innings and gave up one unearned run on four hits.

The Gophers remain in first place in the Big Ten and have swept two rivals in the last two series.

“I think it’s huge that we’ve gotten two sweeps in the past week,” Groenewegen said.