U students freeze to protest violence in Syria

About 25 students participated in a flash freeze at Coffman Union. 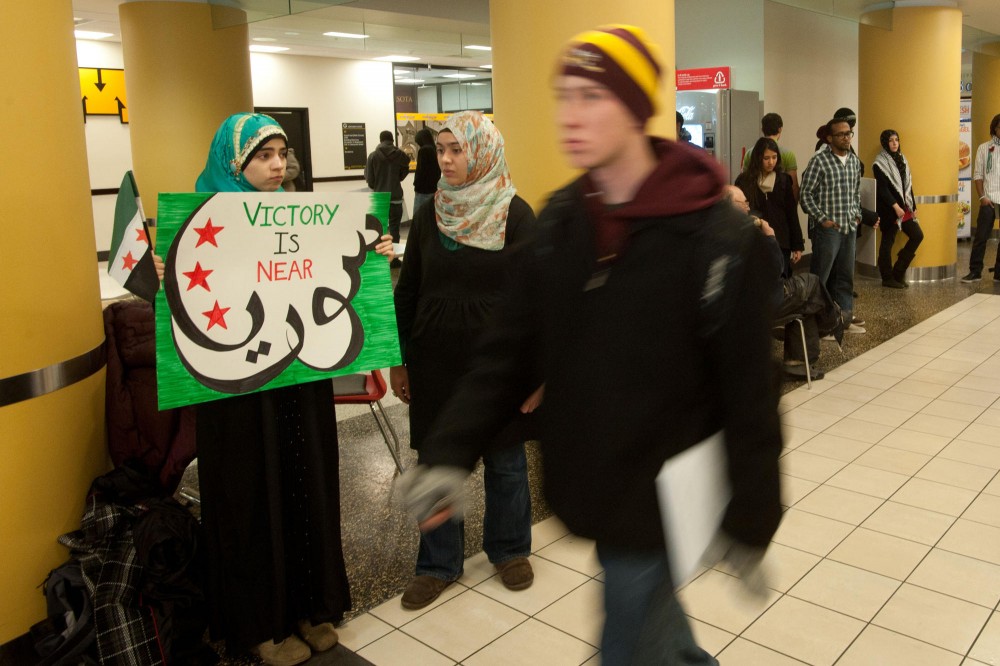 An Syrian Augsburg student demonstrates in support of the opposition movement in Syria on Friday in Coffman Union.

In the middle of Coffman Union, a group of people stood motionless as confused students and staff walked by.

The flash freeze was in protest against the Syrian governmentâÄôs violent response to a 10-month uprising. Among the participants were University of Minnesota students and staff with family in Syria.

The U.N. estimates 5,400 people have died in the Syrian crackdown. A revolt began mostly peacefully but has become more violent as a strong-armed element has developed and citizens have joined the fight against the regime. The U.S. has long called for Syrian President Bashar Assad to step down, and officials say his regimeâÄôs demise is inevitable.

University communications student Amina Maameri said she decided to organize the flash-freeze event after being personally compelled to spread awareness of the violence in Syria.

When Maameri showed up at 2 p.m. at the meeting place outside Coffman, she was pleasantly surprised at the number of people that showed up, she said. About 25 students met Maameri to participate in the event in support of Syrian refugees.

Tyler McNeal, who witnessed the flash freeze, said he didnâÄôt know what it was so he looked it up online.

âÄúSeeing the students made me interested in knowing more,âÄù he said. âÄúIt really opens your eyes to another perspective other than the American one.âÄù

Maameri said people would stop and ask what the participants were doing but that the most powerful part was the discussion after.

Participants gathered and discussed what took place, how everyone felt while participating in the freeze and the reason everyone did it âÄî Syria.

âÄúSyrian people talked about their personal experiences,âÄù she said. âÄúThe tone in the room was very powerful.âÄù

Syrians told stories of friends who suffered jail time and harassment from security forces for demonstrating peacefully. Some participants who shared stories didnâÄôt give their names for fear of repercussions for their family still in Syria.

During the meeting, Maameri passed around fliers advertising Free Syria hoodies available for purchase through the Syrian American Medical Society. Proceeds from the sale will go to a fund for sending winter essentials to Syrians.

Under sanctions from the U.S. and others, SyriaâÄôs economy is groaning, leading to power and heating shortages during a frigid winter.

Maameri said she wanted to organize a fundraising dinner to continue raising money. âÄúThe goal is to educate people,âÄù she said.âÄúThe first step in making a change is raising awareness. We may not have a direct impact, but we can do something.âÄù