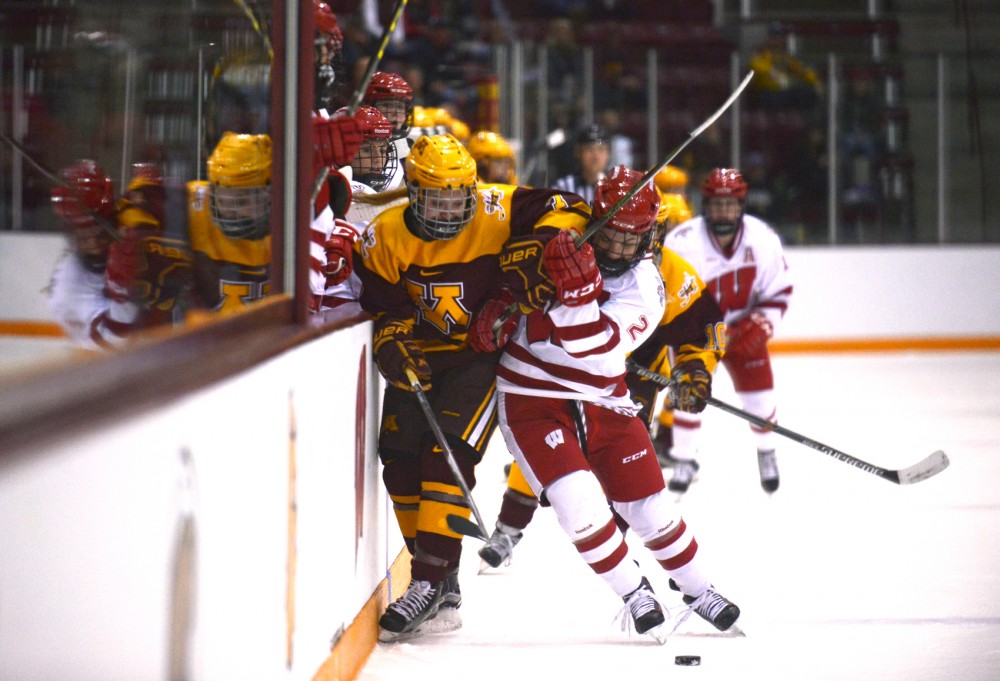 Gophers forward Taylor Williamson and Badgers defender Melissa Channell battle for the puck Sunday at the 2016 WCHA Final Face-off Championship game at Ridder Arena. The gophers were defeated by No. 1 seed Wisconsin 1-0.

Emily Polglaze
The Gophers came up short in round five of the border battle this season.
Minnesota and Wisconsin played for the fifth time this season Sunday in the Western Collegiate Hockey Association playoff championship game, and the Badgers came away with a 1-0 victory at Ridder Arena.
The loss is the first time the Gophers didn’t win the WCHA regular season or tournament since 2012.
“Overall not happy with the outcome, but in regards to the process part and what we ask of our players, they did everything that they could here tonight,” head coach Brad Frost said. “They played with a lot of passion, so I’m proud of them for that.”
No. 3 Wisconsin’s stout defense kept scoring chances slim for the Gophers early on, and the teams left the first in a scoreless draw.
Junior forward Sydney McKibbon scored for the Badgers more than halfway through the second period, and the 1-0 lead was all Wisconsin would need.
No. 2 Minnesota’s 35 shots were all turned away, and the team couldn’t come up with an equalizer despite outshooting the Badgers 14-5 in the final period.
Frost said on Friday before the game that special teams could be the difference against a defensive team like Wisconsin, and the Gophers went 0-4 on the power play Sunday.
Minnesota moved on to the WCHA Final Face-Off title game after defeating No. 8 North Dakota 2-0 on Friday.
Sophomore defenseman Sydney Baldwin put the Gophers ahead with a power-play goal in the first period.
Senior forward Amanda Kessel extended her team’s lead with a diving goal in the second period.
“I’m face down on the ice, and I just see a puck in the air. And it’s behind the line, so I’ll take it,” Kessel said. “I think those are the kind of goals we’re going to get in playoffs.”
North Dakota had an opportunity to get back in the game when Minnesota was called for two penalties toward the end of the second period, but the Gophers successfully killed both.
Minnesota’s penalty kill prevented North Dakota from getting a shot-on-goal in almost two minutes of five-on-three play.
North Dakota only had five shots in the third period and was barely in Minnesota’s zone. Senior goaltender Amanda Leveille earned her 10th shutout of the season in the victory with 21 saves on the night.
With the WCHA playoffs concluded, the Gophers were chosen as the No. 3 seed in the NCAA tournament. The team will host Princeton in the first round.
“We have a team motto that the biggest game of the year is the next game,” Leveille said. “We have an opportunity to win next Saturday and to finish what we’ve started.”
Delete Image
Align Left
Align Center
Align Right
Align Left
Align Center
Delete Heading