Congresswoman Ilhan Omar recently spoke with the Minnesota Daily more than a month since the killing of George Floyd. 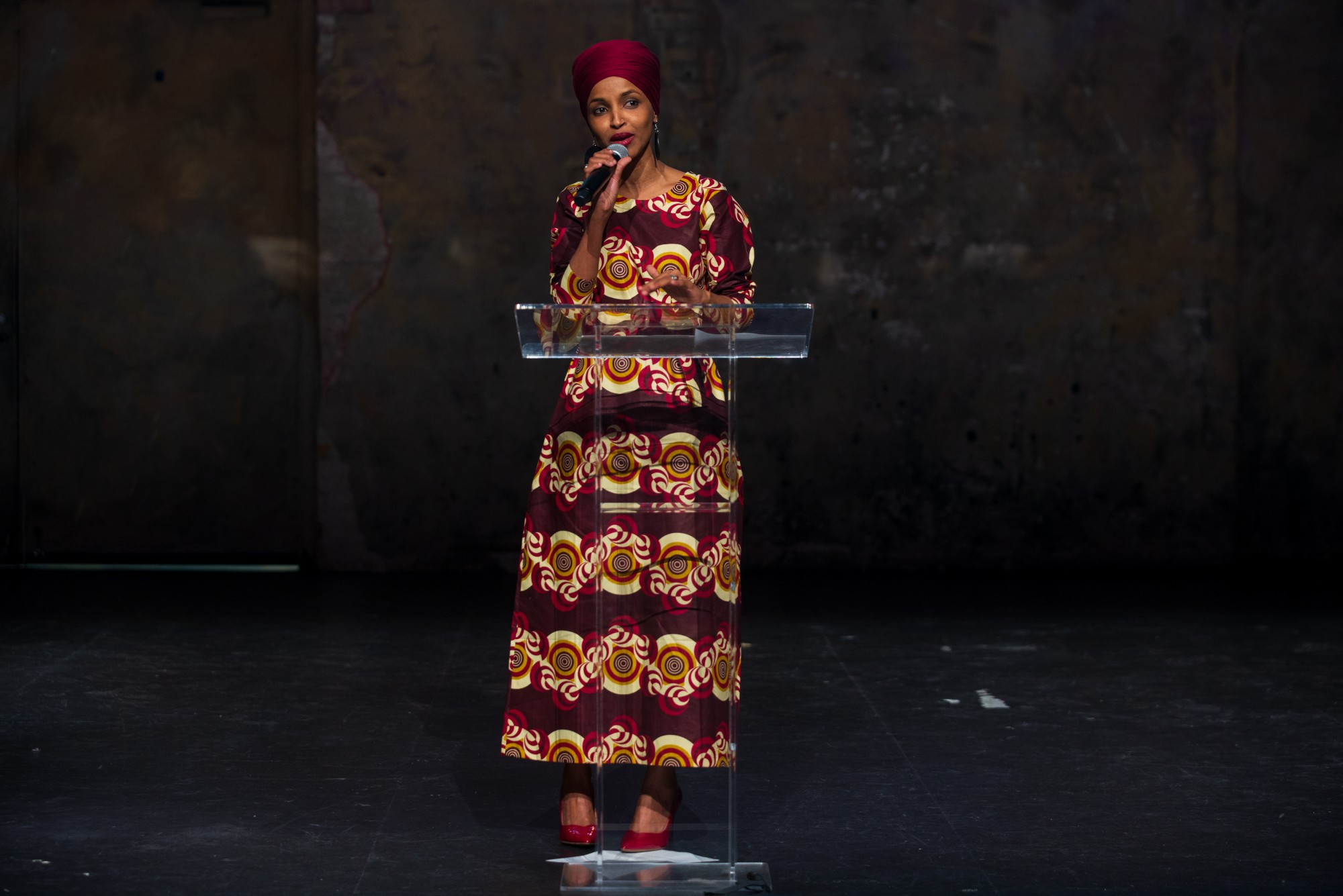 Congresswoman Ilhan Omar addresses an audience at Ilhan Omar 2020 Reelection Kickoff: “Send Her Back to Congress” at Aria on Thursday, Jan. 23, 2020. (Nur B. Adam / Minnesota Daily)

It’s been more than a month since George Floyd was killed. I think life has been different for everyone. But if you can sum it up, how has your life in Washington, representing that district where it happened, been different?

I think here for us personally, it’s been challenging to be part of the community that is really dealing with the killing of George Floyd and how that is a representation of many of the systemic injustices that they both face too often and how police killings always happen in our community. And we march and we rally and we mourn. Oftentimes realizing that not only is justice delayed, but it’s denied. And I think at this moment, everything feels a little different … And so myself and other House Democrats moved with me to pass the George Floyd Justice in Policing Act in order to establish new standards for policing and ban the use of chokehold[s], stop no-knock warrants for racial profiling and qualified immunity for police.

We found ourselves in moments of crises as a nation, and I think the ability for this bill to be for and to every single life that was taken by our policing system that was supposed to protect and serve really is, you know, exciting.

The actions by Democrats within the Minnesota Legislature can almost mirror some of the actions taken by Congress in terms of a pretty broad bill … The Senate introduced smaller bills that don’t do all those things you just listed. So what’s next in terms of actually getting those things passed and signed into law?

Pressure. In life, what I know is that ultimately, elected officials serve the people. And once there is enough pressure and sentiment shift in the public, we will see … these bills enacted. And I think back to our fight for marriage equality and for a really long time, many, many politicians wouldn’t commit to the idea that love is love and equality for people. And we fought to get that, and Minnesota was one of the first states to be able to do that. And we did that with conversations with our neighbors. We did that with sharing stories. We did that with changing hearts. And this is what we need to do to be able to see the transformative change we’ve been fighting for.

Going beyond legislation, you’ve also talked about dismantling systems of oppression that go beyond police departments. That also drew some criticism. What did you mean by that?

If we’re going to dismantle systematic racism in this country, we must radically transform our approach to criminal justice and invest in restorative justice practices.

As you know, the criminal justice system has been built to criminalize people of color and Indigenous people, disproportionately sending them to prison for minor offenses and trapping them in a vicious cycle of incarceration. So in order to dismantle the system, we have to reorganize our economy and our society — and that’s going to require systematic change. It will mean an end to homelessness through a piece of legislation that I’ve introduced, like Homes for All. It means eliminating health disparities in our institutions by enacting things like Medicare for All. It means protecting all people, including working families, people of color and … poor folks who are subject to the climate crisis … You don’t have to study this.

If you … spend a day walking in any of our major cities, you will see that there are people sleeping on the side of the street and experiencing homelessness in one of the wealthiest nations in the [world]. And that’s due to systematic social and economic neglect that often doesn’t recognize the humanity of people. If you spend time in our schools and in our streets, you will see disinvestment in education in particular parts of the city.

For us, it’s North Minneapolis and some parts of South Minneapolis. You will see the school-to-prison pipeline in the way that you invest in police officers in our schools and not … in social workers and mental health workers and nurses to care for our children. You’ll see that in food insecurity. You have children who are experiencing hunger in our country who are expected to show up and test the same way as their counterparts who come from families who are food secure. So we need to feed the bellies before we can feed the brain. Because we know there is a linkage between poverty and the ways in which there’s a lack of education investment and health investment, and how that leads to crime in our community … And how that leads to longer and worse health outcomes. And so for me, I think about the whole system and how it’s failing because it’s not addressing the issues that need to be addressed.

Can you talk about some of the ways communities and grassroots organizers are responding to these issues? I think we’ve seen a lot of that, especially here in Minneapolis.

We have, and that’s the beauty of our city. We are truly always engaged in community building and showing up for one another. And we’ve seen that throughout the COVID-19 public health pandemic. We’ve seen that through the economic crisis, that has been the result of the country’s pandemic. And we’re seeing that now, as we deal with the challenges that arose from the uprising that our city has gone through because of the killing of George Floyd. We’ve seen food distribution centers show up in almost every corner of Minneapolis and across our district, whether it is in Richfield, or in Brooklyn Center, or in Golden Valley or St. Louis Park.

My office has really turned into a rapid-response center where we have helped countless numbers of constituents fill out and receive their unemployment benefits to help small businesses get the grants and loans that are available to them. We turned our office into a distribution center … in providing not only food but medical and other essential supplies. We’ve delivered and distributed 20 tons of food in North Minneapolis and in South Minneapolis and in Cedar-Riverside … Delivering fruits and vegetables and milk to community members.

Nonprofit organizations have all stepped up to really support and we’ve been with them and raised over $300,000 to support them in their effort in providing support to the community. We’re seeing safety kits show up and people distributing masks and hand sanitizers and other things that people can use. And seeing the enormous response in urging people to get tested.

I think as we also heal from the trauma that many of our communities have been dealing with in the past months, we’re also seeing people care for each other’s mental health and show up for one another when there’s been a need. So I know that we’re all struggling with paying rent and mortgage, and so there’s been a community effort to keep and support people in keeping them housed … But when it comes to uplifting one another, that’s a place where we can all find joy in. And you can really see that everywhere.

A lot of people first heard your name in 2018, but before that, you were a local state representative for a lot of the neighborhoods around the University. Has that experience helped inform you since going to Congress and in the last month or so?

Yeah … I used to even before that, I used to work for the University of Minnesota Extension department, and my work was concentrated in … addressing the insecurities many of our communities have and …  as I got the opportunity to represent the neighborhood I grew up in and in the community that nourished me to be who I am today, I really prioritized advocating to end food insecurity and the housing disparities that we have with a lot of the issues with rent and injustices that exist within the evictions that many young people deal with across our state. And addressing investment in education and really looking at issues like sexual harassment and assault.

One of the pieces of legislation I led was championed by a lot of the young people I represented, and that was to end the statute of limitations on sexual assault cases … and this really was opportunity for me to figure out how to turn the cries and the anguish of many of my constituents into legislation and to champion those causes. And now, it’s informed what I do on a national level, whether it’s learning about the challenges people had during COVID-19 — paying their rent and introducing the rent and mortgage cancellation bill — or looking at the challenges we have carrying the burden or student debt and introducing the student debt cancellation bill … I think as someone who represented [this district] in the state House and to do that on a federal level as well, I fight to make sure a better world is created than the one I grew up in, not only for my children but for the generations to come.

This interview has been edited for clarity and length.