A University of Minnesota student group, MinneCinema Studios, made a horror film for the 48 Hour Film Festival Project. 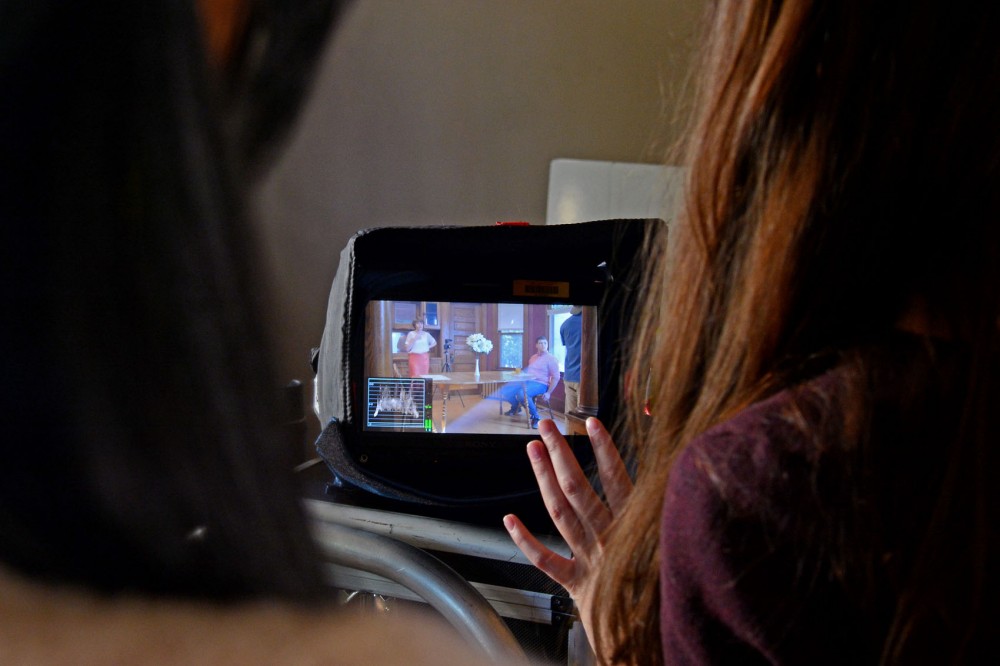 Rtusha Kulkarni and Julia Marshall of the student group MinneCinema Studios watch a play back of their submission for the 48 Hour Film Horror Project. Participating groups were given 48 hours to create an original horror movie, which will be shown at the Mall of America on Thursday evening.

Chance Wellnitz
Aman wakes up sitting at an unfamiliar table, zip-tied to his seat. Classical music fills the room as he pulls against his binding. He looks to see two cameras pointed at him, recording him, one to his left and one right.
A woman enters with breakfast.
“Good morning, Dave,” she says, cheerfully. “Don’t worry, I made sure it was no-pulp. Just the way you like it.”
Dave has never seen this woman before in his life.
A few minutes later, writer-director Rtusha Kulkarni yelled “cut” from off screen, and the actors went back to practicing their lines. The actors — Elina Walchuck and Nicolas Jacques — are students at the University of Minnesota and members of MinneCinema Studios, the U’s only hands-on filmmaking group. In fact, everybody bustling around the film set is a member of the group.
The finished film, “C:\DAVE\OCT 2-8” premieres Thursday at Theatres at Mall of America as part of a block of the 48 Hour Film Horror Project. The annual festival challenges local filmmakers to create four-to seven-minute films in 48 hours. On a Friday night, teams draw their sub-genre and they’re given particular elements to include in their work.
On the following Sunday night, they turn in their completed film.
Not only did MinneCinema accept the challenge, they also finished their film before the deadline.
Kulkarni, a studies in cinema and media culture senior, co-founded MinneCinema with her friend and roommate Julia Marshall, a junior marketing major. The two loved watching and discussing movies together, but the U already had clubs for that, she said.
“There were a lot of film-watching clubs, but nothing to help aspiring filmmakers to improve their craft,” Kulkarni said. “So we decided to start one together.”
MinneCinema started as more of a resource for film students to network and find help to complete their own projects, but the group revamped this year, she said. It’s offering
multiple opportunities for filmmakers to produce — the 48 Hour Horror Film Project is just one.
“There’s more consequence for not finishing [the 48 Hour film],” Kulkarni said. “Whereas, if it were just a personal project for members to finish, it’s very easy for people to be like, ‘Oh, it’s just my club thing. It’s not a deadline I have to complete or anything.’”
Members responded positively to the new direction. She said the group’s mailing list contains more than 200 members, and 50-plus people regularly attend the bi-weekly meetings.
At one point on the Friday when the group drew their sub-genre, there were 15 people huddled in Kulkarni’s apartment pitching ideas.
With her web mini-series “Residence,” a comedic mockumentary on dorm life, Kulkarni was no stranger to writing on a team. However, she said she’d never been on that large of a team. The 48 Hour Horror Film Project presented another challenge: Kulkarni doesn’t watch many horror films.
“I actually get really bad nightmares,” she said, laughing.
Kulkarni, along with many involved in writing the film, is more of a comedy writer.
“I learned very young that people don’t like smart alecks, and humor is a good way to make friends,” Kulkarni said.
However, she and the other writers had to catch themselves while pitching ideas because the tone would often shift to a parody of horror conventions. Not only did the group want to expand their range by making a serious horror film, they wanted to expand upon what a serious horror film could be.
The group drew the found footage sub-genre, which presented a unique challenge to studies in cinema and media culture junior Joe McNairy as the director of photography.
“[It was a struggle] to make really cool and artsy shots but also be found footage,” McNairy said — the group was aiming for more than just “Paranormal Activity.”
Unlike the writers,
McNairy and editor and sound editor Sebastian Swanson had some experience in the genre. The two worked together on a short horror film this past spring semester.
“The concept of horror relies on the idea of suspense,” Swanson said. “[Sound] functions as a signal to the audience to know when something scary may happen, and you
can use that as a trick to make them anticipate something and not deliver it.”
With sound editing, it’s not just about capturing the dialogue on set; it’s about capturing something larger, he said.
“It’s about building a soundscape,” the biological science senior said.
Despite his knowledge on the subject, Swanson, like many people involved with MinneCinema, isn’t a film student. He was interested in photography and later applied those concepts to film. From there, his interest grew, he said.
Kulkarni has received positive feedback from most members.
“This really created a bond between a lot of us,” she said. “And it got people … really, really excited to make another film, which is so fun to experience. If anything, I think everyone is just pumped to make as many films as possible.”
48 Hour Film Horror Project screening
Where Theatres at Mall of America, 401 South Ave., Bloomington
When 7 p.m. Thursday
Cost $10.50
Delete Image
Align Left
Align Center
Align Right
Align Left
Align Center
Delete Heading