Julia Courter and Paula Rincon-Otero are 6-2 in doubles this year. 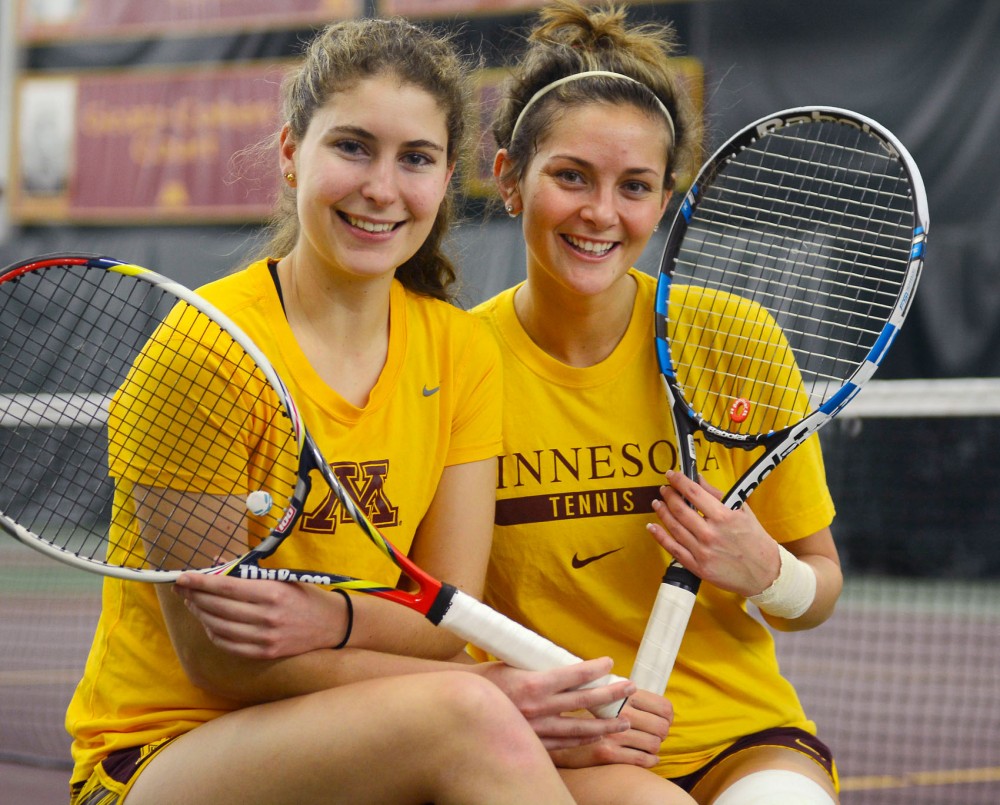 Gophers sophomore Paula Rincon-Otero, left, and junior Julia Courter pose at the Baseline Tennis Center Tuesday afternoon. The two have gotten off to a strong start in doubles this season.

She was homeschooled, forcing her to make her mark on the United States Tennis Association circuit tournaments.

Paula Rincon-Otero, who grew up in Spain, certainly faced adjustments before she arrived in Minneapolis, too.

Though they come from different backgrounds, Courter and Rincon-Otero have developed a strong chemistry on and off the court that is put on display when they play doubles together.

In the case of Courter and Rincon-Otero, Merzbacher said the energy level they bring to every match provides benefits for the pair.

“I just think their energy level is so high,” Merzbacher said. “They’re always moving, and they communicate really well on the court.”

He said he looks to Courter and Rincon-Otero to provide an energy boost for the whole team when the pair takes the court.

“They set the tone, and we really need that type of leadership,” Merzbacher said. “They really pressure the other team … Really, they just control their court.”

Rincon-Otero excels more up at the net, while Courter provides steady play on the baseline. That meshing of playing styles has the duo at 6-2 together in doubles so far this season.

Courter said she and Rincon-Otero are close friends, and that camaraderie makes them stronger within the white lines.

“Being friends off the court really helps,” Courter said. “On the court, we both really want to win and hate losing, so we definitely feed off of one another.”

Rincon-Otero reiterated Courter’s claim, noting that they hang out a lot outside of practice.

“We usually room together on the road. I think it’s because the coaches think we really have a strong chemistry and want us to keep building on it,” Rincon-Otero said.

Before the season, the team had the chance to chat with the coaching staff about whom they wanted to play with.

To no surprise, both Courter and Rincon-Otero requested each other as doubles partners.

“I think Paula [and I] just work really well together,” Courter said. “Her volleys are unbelievable, and I’m pretty good at the baseline … We definitely feed off of one another.”

The doubles pair won four straight bouts last month, including an upset over Caroline Price and Jamie Loeb of No. 3 North Carolina.

The key to their success is trust, according to Rincon-Otero.

“It’s easy for me to be less nervous and focus on myself because I trust her,” she said. “That allows us to be aggressive, and when we’re aggressive, we’re playing our best tennis.”

Merzbacher said the Gophers have emphasized earning the doubles point this year.

He looks to the duo for consistent success moving forward.

“They had a good fall, so we knew what they could do,” he said. “They’re just coming together really well, and we need that because the doubles point is going to be vital all year.”