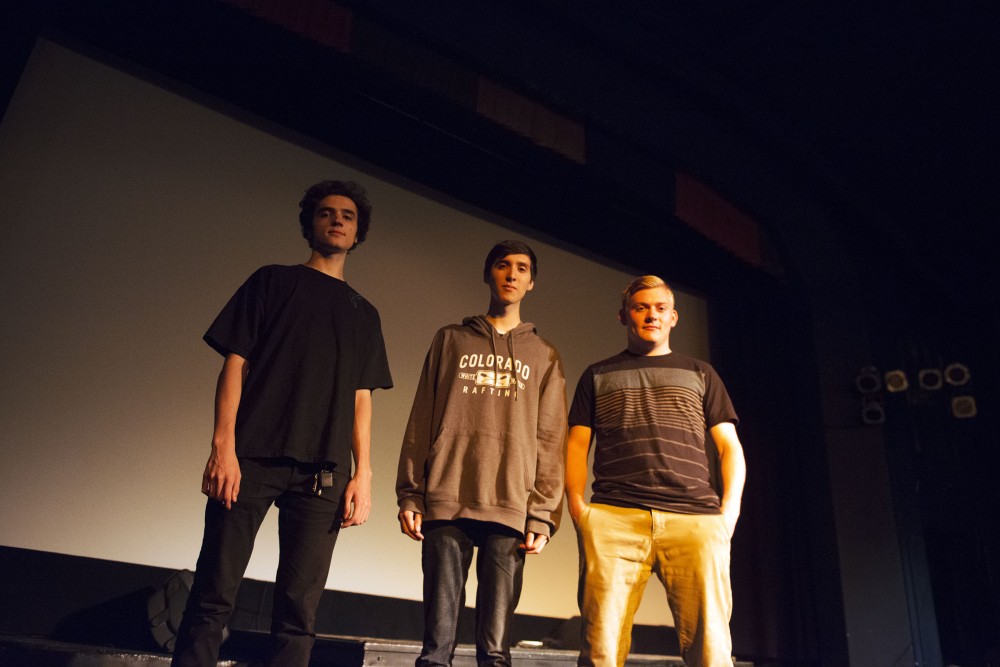 Computer Science junior Frank Hartman, left, Biochemistry senior Sebastian Swanson, center, and Studies in Cinema and Media Culture senior Joe McNairy, right pose for a portrait at Parkway Theater on Sept. 15, 2016. They have all contributed to films that will be screened at the MPLS Shorts: Emerging Filmmakers film festival on Thursday, Sept. 22, 2016 at Parkway Theater at 7p.m.

Every young filmmaker dreams of the moment they see their work presented on the silver screen.

On Sept. 22, the Parkway Theater will host “Minneapolis Shorts: Emerging Filmmakers,” an event focused on the premiere of three short films — two from Minneapolis filmmakers and one from a Chicago-based director.

Each short was shot in the Twin Cities and features untapped local acting talent. The event, which will be run by the young filmmakers themselves, will provide an in-depth look at topical issues like rape culture and police brutality.

“Me and [co-director Sebastian Swanson] wanted to make a film about something that affects people we know,” McNairy said. “Rape culture and how we deal with it has become such a hot-button issue with Brock Turner.”

McNairy and Swanson are University of Minnesota seniors. McNairy studies cinema and media culture and Swanson is pursuing a degree in biochemistry.

The pair’s film, “Seeing Violet,” is a fictional account of a sexual assault and its aftermath. The story explores how friends and family of survivors deal with the news that a loved one was assaulted.

“[The film] pulls mostly from a male perspective,” McNairy said. “Since we’re both males, we didn’t think it was right to tell the story from a woman’s point of view, but I think what this can do is create a conversation for some people.”

“Seeing Violet” was a joint venture in writing, directing and producing; the pair mostly split directorial duties. McNairy is primarily concerned with cinematography and visuals, while Swanson works with the actors.

The duo started out making online videos and eventually began filming longer shorts. One of these, “Paper Route” was an official selection of the 2016 Minneapolis St. Paul International Film Festival.

“I just loved the idea of going to the movies,” McNairy said. “Seeing ourselves on the big screen is one of the things we’ve always wanted to do.”

In “King Park,” three kids discover the information of a police officer accused of murder. The film discusses how police brutality shatters lives, and how communities seek to rebuild themselves in the aftermath.

“I think our movies both have to do with heavy issues,” McNairy said. “We’ve both made some very anti-establishment films.”

“As the Crow Flies,” the third film featured in the event, details a fictional 90s punk rock band. In the film, two friends find their relationship significantly altered after growing up and starting a band together.

Filmmaker John TerEick was inspired to examine how relationships are affected by bands; the film aims to dissect the way similar musical tastes breed contempt.

“Admittedly, this is a sad response to my love for music,” TerEick said, “ … and my inability to play in a band … or any instruments.”

“As the Crow Flies” was filmed on 16mm film. As a result, the picture has an amplified sense of nostalgia. The lo-fi nature of the film fits the era it painstakingly tries to represent.

“[This] served as a big challenge [for] a crew comprised mostly of students,” TerEick said. “Everyone had to work hard to get the best takes, performances and live music.”

While there is certainly a theme of moral responsibility running through the films, each is more concerned with how the audience interacts with the storytelling. All three films give an accurate, artistic depiction of the emerging filmmakers who directed it.

“How the movie looks and feels is on us,” McNairy said. “As for how everything got made, that’s on our friends and family. Great art is made by a great group.”

Editor’s note: Jake Nokovi? is a former employee of the Minnesota Daily.