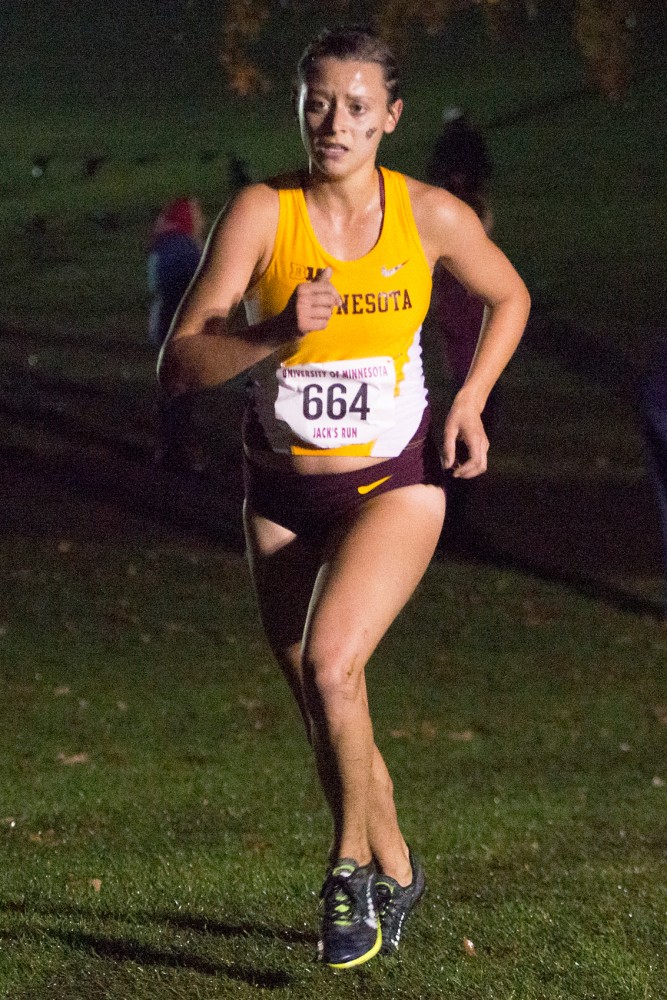 Thomas Jaakola
Freshman Abby Kargol was the first women’s runner to cross the finish line Friday evening at Jack’s Twilight Run, finishing in 25th place overall with a time of 23:06.5.
Redshirt freshman Courtney Alama finished in 28th with a time of 23:11.1, and sophomore Bailey Ness finished right behind Alama in a season-best 23:12.7. The three were
the Gophers top-30 finishers in the open race, running through the rain on a mucky course at the Les Bolstad Golf Course.
“I really enjoyed it; it made it more of a fun experience,” Alama said. “Standing at the start line, everyone was way more excited. There wasn’t a lot of nerves, and everyone was really upbeat.”
Alama said she was happy with her overall performance but thought she started out too hard and ended up fading near the end of the race. She said she plans to try and even out for the next race.
Head coach Sarah Hopkins said Jack’s Twilight Run is a good low-pressure opportunity for the team’s younger runners to gain experience at the end of the season.
“We can only bring nine of our kids to [the Big Ten championships], so for a roster as big as we have, it’s really important for the development of the rest of the group to continue to race,” Hopkins said.
Redshirt sophomore Danielle Anderson finished fourth for the Gophers in 23:20.1. It was her second race back after missing much of the year due to a leg injury.
Hopkins said her performance was a step in the right direction. Anderson was a consistent top-five runner for the team her redshirt freshman year when she finished fourth for the Gophers in the NCAA Midwest regional meet.
“I felt really good. I’ve been feeling pretty strong and fit the past couple of weeks, and especially with this race I felt the best that I have felt,” Anderson said.
The race this year had an extra challenge, with pouring rain in addition to the hills and the darkness. Hopkins said in those conditions, it’s important for the team not to focus on its times but instead on just moving ahead of as many runners as possible.
“I think we really raced well in some pretty challenging conditions,” Hopkins said. “You never know, the Big Ten meet could be the same way where it’s sloppy, rainy and cold, and you can either whine about it or try and go out there and beat people. You have to learn how to race in different scenarios.”
The race became even more challenging during the second lap when the course was even darker. Alama said there were a couple of scary moments where the runners couldn’t even see the ground in front of them because it had gotten so dark.
“They have to learn how to race late into the season so that next year or the year after a lot of [the runners] that raced at Jack’s will be on the Big Ten roster,” Hopkins said.
Delete Image
Align Left
Align Center
Align Right
Align Left
Align Center
Delete Heading