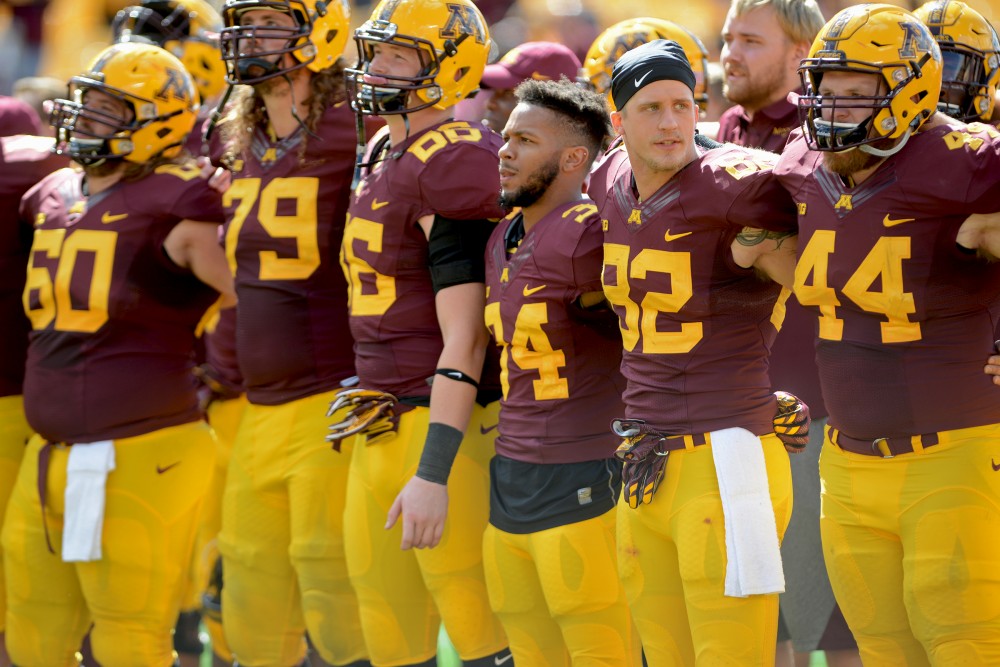 The Gophers after winning against Indiana State on Saturday, Sept. 10, 2016 at TCF Bank Stadium.

Iowa visits Minnesota in what should be a very close game for two teams coming off conference losses. A full breakdown, prediction, and other notes can be found below:

Nearly every part of Minnesota’s team has had some problem at some point this season, but not their rushing offense. The group has rushed for 150 yards or more every game this season, and has scored 12 touchdowns.

Iowa’s rushing defense was elite last year – 15th in the FBS – but still allowed three touchdowns on the ground against Minnesota in their 2015 matchup. This year, the Hawkeyes have taken a step back defending the run, allowing 182.8 yards a game.

The Gophers’ running offense had a strong showing against a tougherr run defense last year, and will likely see even more success in this game.

When Iowa runs the ball:

Similar to Minnesota, Iowa also has two options at running back — senior LeShun Daniels and junior Akrum Wadley. The two have combined for 136.4 yards a game and have 10 touchdowns in five games.

Daniels caused huge problems for Minnesota last year. He had career highs with 195 yards on 26 attempts with three touchdowns. Minnesota’s rushing defense is a lot healthier than they were against Iowa last year, but Daniels still poses a big threat.

Leidner isn’t playing at an elite level, but he has been good. His game against Penn State had some wrinkles, as his completion percentage was lower than it was against Colorado State and Indiana State, and he threw an interception in the red zone.

Just through quarterbacking rating, Leidner had his best game of the year against Iowa in 2015. He completed 70.9 percent of his passes, threw for 259 yards and had one touchdown. However, Iowa’s passing defense has improved from last year.

The Hawkeyes are shutting down teams when they throw the ball. Iowa has had a favorable schedule so far, but it’s still holding most of its opponents below their season average in the air. Cornerback Desmond King, Iowa’s star player and one of the best defenders in the Big Ten, has limited receivers to under 11 yards combined in his last three games, according to Pro Football Focus. He will be the best player Minnesota faces this year and Leidner will know it by the end of the game.

When Iowa passes the ball:

Minnesota’s biggest advantage for this game is when they run the ball. For Iowa, it’s when they throw it against the Gophers’ passing defense.

Quarterback C.J. Beathard isn’t running the ball as much as he used to but is still throwing the ball well, even with Iowa’s subpar offensive line that has already allowed 14 sacks. Iowa’s passing offense is far from great this year, but Minnesota’s passing defense is far worse.

The Gophers’ passing defense only has one interception and has allowed nine touchdowns this year. Opposing quarterbacks are throwing for 255.3 yards a game, which is dead last in the Big Ten. The Gophers defensive line could help out the secondary by creating pressure against a weak offensive line. While Beathard has an injured group of receivers, he could still have a big game if the secondary continues its downward spiral.

This game could be as close as they come, but the Gophers will return the Floyd of Rosedale Saturday against the Hawkeyes thanks to a big day from their running backs.

Around the web on the Gophers and the Hawkeyes:

1. The side of C.J. Beathard that you didn’t know about

-A great profile on Iowa’s C.J. Beathard. The star quarterback’s dad is an accomplished country music songwriter, came to Iowa from Nashville, and sounds like an interesting guy. This article by the Iowa City Press-Citizen’s Mark Emmert looks at every facet of Beathard’s life and even goes into his NFL chances.

– I meant to post this last week but this is a fun little piece on Leidner’s loyal fans. The Daily Gopher did a good job digging up the history of the group and talking to the right people about it.

-If you haven’t been following Iowa football, the first thing you need to know is that this hasn’t been the season they had hoped for. Scott Dochterman of landof10.com penned a column on everything that’s been going wrong and looks at past seasons where the Hawkeyes’ expectations were not met.

4. Gophers defense not bending as much as they’re just breaking

-The Gophers lost the game against Penn State because of big plays given up by its defense. The Star Tribune’s Joe Christensen wrote about the Gophers’ frustrations and how they are aiming to fix this new problem.

-The Daily Iowan’s Blake Dowson looks at three different statistics from the Hawkeyes’ loss against Northwestern and why they point to larger problems with the team. In summary, the offense has a lot of problems.

1. Gophers’ offense has nothing to worry about

-Minnesota’s defense may have problems, but the offense should be worry-free right now. The group is averaging 36.3 points a game, signaling a change from last year. That number should go down as the Gophers enter Big Ten play but it still looks like their offense will be a lot better than last year, as Minnesota averaged only 22.5 points a game — second to last in the Big Ten. The running backs are excelling and there’s no debating Leidner has improved from last year.

2. Minnesota may not win a road game this year

-The Gophers’ schedule overall this year is easy. They had three non-conference games that weren’t hard to win, and they don’t have to face the toughest teams in the Big Ten, like No. 2 Ohio State and No. 4 Michigan. However, the Gophers’ road schedule looks tough. Maryland has got out to a very hot start, boasting an undefeated record and an elite offense. The rest of their away games after the Oct. 17 matchup – Illinois, No. 12 Nebraska, and No. 11 Wisconsin – won’t be easy to win. Illinois will be the team’s best chance to win on the road. Penn State might have been Minnesota’s best chance to grab a road win.

3. Penalties are a significant problem

-The sample size is large enough now: the Gophers are committing far too many penalties. They’re averaging 8.8 a game, tied for the 12th worst in the FBS. Its cost them an average of 75.8 yards a game and was a factor in their loss against Penn State. Minnesota will have close games this year that could be decided on whether or not they keep committing penalties.

1. Smith steps up in close loss

-A story on Brian Smith Jr.’s emergence as one of the top wide receiver options for Leidner.

– Jay Johnson’s father died before the game against Penn State. This is a look into how Johnson and other members of the Gophers are handling it.

3. Questions from the Other Side: Iowa football beat writer Blake Dowson

-For this week’s Questions from the Other Side, the Minnesota Daily spoke with Blake Dowson, the Iowa football beat writer and sports editor for the Daily Iowan. Dowson shares his pick to win the Heisman and a score prediction for the game Saturday.

4. Gophers set eyes on Floyd of Rosedale after overtime loss

-The Gophers lost to Penn State in overtime last week. Comments from Claeys and players on how they plan to move on and focus on Iowa are included.

-The Gophers’ secondary had a bad third quarter against Penn State. Here’s an article on it from Saturday.